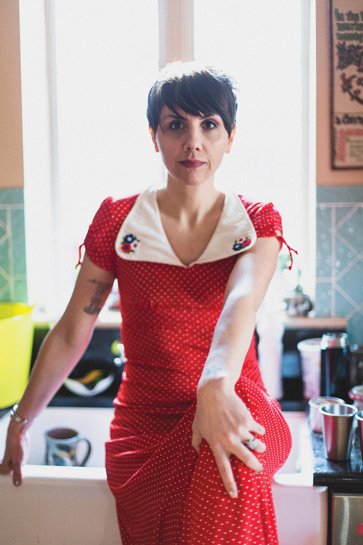 Like Carl Sandburg, Nelson Algren and Gwendolyn Brooks, the Chicago writers Jessica Hopper references in her new memoir, Night Moves (University of Texas Press, 2018), she makes the “neon wilderness” of the city a main character. Divided into three sections, spanning a five-year time period, between 2004 and 2009, Night Moves is a vivid Polaroid snapshot of an urban center in transition. Hopper read from her new book last month at Women & Children First Books in Chicago. She will do the same at Empty Bottle Book Club in Chicago October 29.

I spoke with Hopper shortly before the publication of the book.

GS: Jessica, I’d like to begin by asking you to say something about the purpose of dating the pieces in Night Moves, as well as the book’s chronology.

Jessica Hopper: We sort of went back and forth, my editor and I, about whether or not to include the dates. To me, I was less interested in having a kind of particular arc. I really just wanted to have it more like a mood. We went with the dates because I did want to have a sense of different spaces of progression — from dreaming of being a writer to actualizing some of that dream.

GS: As a whole, Night Moves is a love letter to Chicago — as you say “seven kinds of in love with Chicago” — but never more so than in “American City, I Love You,” which is dated March 3, 2004, making it one of the oldest pieces in the book. Would it be fair to say that that piece played a part as inspiration for the book itself?

GS: As a reader, I detected two distinct writer’s voices employed by you in your books, The First Collection of Criticism by a Living Female Rock Critic and Night Moves. Of those two voices, is one more of a true representation of you as a person?

JH: The writing that is in Night Moves is, in some ways, my natural style. The writing that you see in my critical and journalistic writing, more than in my journal writing, per se, I’m trying to make a persuasive argument to the general public. It’s definitely a different sort of thing. I think where they meet is at an interest in fine detail. I think they overlap in how I think. Night Moves is maybe a little bit more of expression of self, whereas the criticism is more a consideration of other people’s lives and work. But they’re both very much steeped in being Midwestern, my feminism, my curiosity and my fandom. I think they’re both expressions of that.

GS: The Girls’ Guide to Rocking was published in 2009 and The First Collection of Criticism by a Female Living Rock Critic was published in 2015. Were you working on Night Moves at the same time as those other books or did its genesis come later?

JH: Its genesis came in the wake of The Collection… In part because I was working with my friend Alice (Merrill) to create an archive of my work. We were finding, in putting together the pieces for the criticism collection, they had appeared in a dozen or more different publications. We were creating an index of all my work; whether it was fanzines or print publications or writing from blogs or one-off fanzines I was doing when I was going on tour. In the process of that, Alice noticed that I had a lot of writing about Chicago, which didn’t really fit with the collection book. We held onto that idea until after the collection book got out the door. We turned to what were other pieces of writing that were maybe in the wings [thinking we could cull from them]. Revisiting that, it works as a testament to a time and that seemed important to me to capture.

GS: In the “Tie A Yellow Ribbon ‘Round the Ol’ Oak Tree” piece, you write about poetry. Do you write poetry, and did any of these pieces begin as poems?

JH: I don’t write poetry with any intention of it being poetry. As my friend Hanif (Abdurraqib) wrote in the blurb on the back cover, “It is a book of poems…”; it is also this and this. I was really flattered by his insistence. I know that some of the shorter pieces, people have mentioned that they are maybe poetic in form, with curious line breaks in them. I am an avid reader and consumer of poetry and so anything that appears in the book that seems to be in that form is very much under the influence of it. I’m usually reading two books of poetry concurrent to anything else I’m reading. I think there have been one or two times in my life when I got interested in writing poetry, but when I did, I couldn’t judge at all that it was any good in the same way that I am able to discern with my other writing, where I go, “Well, this makes an argument that I can stand behind!” I had no idea whether it was valuable or elegant or conveyed anything meaningful. I never really have pursued it. It’s such a foreign language to me. I wouldn’t rule it out for the future, but it’s not my idiom.

GS: Bicycles play a prominent role in the book. Do you still ride, and if so, what are you riding these days?

JH: I still have my same crappy bike. I had a very beloved bike that got stolen in about 2005. Within a few weeks it had been replaced by the new bike I talk about in the book. The new bike in the book is still my old bike. It’s a little less ratty now. My husband did a good job of securing these rickety bike baskets on the back. It’s definitely got some new things. But it’s probably older than I am! I still ride it around the mean streets of Wilmette, but I can’t tote my children to school on the back of the thing.

GS: I’m glad you mentioned your children. As a mother, what do you think about the possibility of your children reading Night Moves someday?

JH: Oh, you know! I will just live in that fear. My older son has read parts of, if not most of, Girls Guide to Rocking and had a whole line of questioning for me after that. He’s eight and very precocious. He knows that Night Moves is coming out and that he’s not allowed to read it. He read the front flap. As far as I know, his curiosity hasn’t taken him further. I would maybe let him read a redacted version of the book. There are certainly parts in there that might be a little scandalizing, until he’s in his late teens. My son is an avid reader and a writer and an appreciator of all sorts of different things. My hope for anybody who read the book, whether they’re young or old, is that people who love the city can see and identify parts of the city and can connect with it. To me, it feel  like it is a book about the dream of being a writer, the dream of being an artist and nursing that transitional space between the thing you’re dreaming of being and then beginning to actualize that dream. In some ways, I hope it is valuable to younger readers, but not my son, who is in third grade.

GS: Have you started working on or thinking about your next book project?

JH: I’m turning in a book proposal at the end of the month. Hopefully, I’ll be able to announce book number four in the next few weeks. I have a good sense of what my next three books are, which is maybe insane and ambitious. One thing about making a book — and other writers have certainly complained about this — is that you’ll be writing a book and as you are doing it there becomes another book within you that nags rather insistently. There are basically three other books. One of them is music historic, and there’s another memoir. That’s hopefully what’s on the horizon. It’s exciting to be working on the proposal for what will hopefully be my next book, which is not in any way drawn on my own personal past. I would like to be out of my past someday.