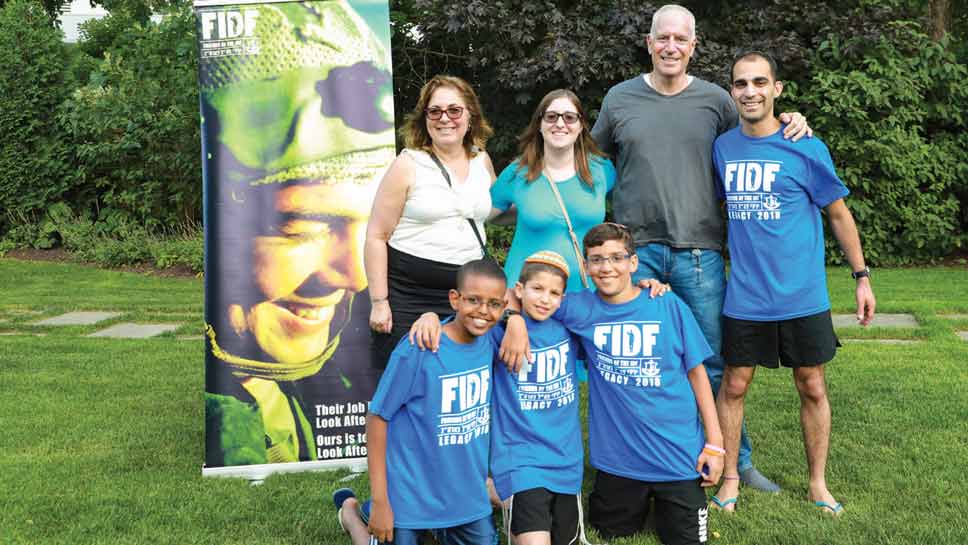 Israeli children (blue shirts) spent part of their summertime with North Shore families. They had lost either a parent or a sibling who had served as a soldier in the Israeli Defense Forces.

Day Four of a whirlwind four-day summer weekend had finally calmed down when an Israeli child visiting Winnetka asked Winnetkan Lori Komisar a simple question: “Why am I here?”

Komisar had a quick, heartfelt reply for the child, who had lost a parent or a sibling who had served as a soldier in the Israel Defense Forces (IDF):

“Your father [and the fathers or siblings of others],” she began, “all made sacrifices for me and my children so that my children will never have to suffer like you.

Komisar is a longtime Friends of the Israel Defense Forces (FIDF) volunteer. This summer the FIDF LEGACY program hosted 26 bar and bat mitzvah-aged children and siblings of fallen IDF soldiers. Komisar and her husband, Morris Silverman, have been hosting children in their Winnetka home since the LEGACY program began nine years ago.

The children arrived from Israel on a Thursday and two to five children were sent to each host family accompanied by a counselor to avoid having a language barrier. Some of the other host families hail from Glencoe, Highland Park and Skokie.

Komisar and her husband kicked off the weekend with a pool and pizza party for the 26 kids, counselors and host families. Other activities included sightseeing in Chicago, a Seadog fireworks cruise near Navy Pier and a synagogue-sponsored trip to Great America in Gurnee. The children later spent two weeks at JCC Camp Chi in Wisconsin and then visited Niagara Falls in New York before returning to Israel.

“In a very short period of four days, we become so close that it’s almost like we have a new family unit,” Komisar said. “There’s just something so beautiful about letting these kids, who have suffered such a terrible loss, know that they are not alone in the world.”

But the healing process began when the kids felt comfortable enough, in the presence of their hosts, to open up in another country, to discuss their feelings, their fears.

And their hopes for sunnier days.

“A lot of these children come with a special set of problems, and we actually talk about why they’re here and their losses,” Komisar said. “Out of all the things I do, this is so amazing, because they want to talk, and they’ve all suffered something that we can’t even get our arms around. They just live life, and you probably get more out of this than you give.”

FIDF Midwest Executive Director Tamir Oppenheim served as a paratrooper in the Israeli army for three years and for 14 years as a reservist, so he can empathize with what these children and their families have gone through.

“I was 2 when I lost my father in a work accident, so I know firsthand what those kids are experiencing,” Oppenheim said. “I’m really connected to those kids and their stories.”

Oppenheim moved to the United States after his wife got a job in Detroit.

“People with common sense go where the wife is,” he said.

He’s grateful for the Jewish community’s support of the LEGACY program.

“But it’s not just bringing the kids to America; it’s also supporting the organization that works with the kids in Israel on a regular basis,” Oppenheim said. “They have activities all year long that the FIDF sponsors as well.”

Oppenheim’s goal is to see the day when there will no longer be a need for the LEGACY program.

Throughout the years, Komisar’s family has reconnected with the children and had the opportunity to meet their families while visiting Israel.

“Lori and Morrie are two of the many hosts who go to Israel and meet up with the kids,” Oppenheim said. “They have more than 120 students that they sponsor. Every year they have a big dinner in Israel with the LEGACY Program and the IMPACT! scholarship students.”

Chicago donors established IMPACT! It began 17 years ago, with 14,000 students having benefitted from it.

Komisar enjoys being involved in the IMPACT! program. She said when a soldier finishes his or her duty and can’t afford to go to college, the solider can apply for an IMPACT! Scholarship — worth $4,000 a year for four years.

Oppenheim looks forward to traveling to Israel to visit students, soldiers and, as a bonus, his children. Daughter Romi is a social worker with the Israeli Navy; son Omer served as a paratrooper in Oppenheim’s old unit.

“My wife and I are very proud that our kids are doing their duty to defend the State of Israel even though they grew up in America,” Oppenheim said. “I’m very fortunate to have a job that allows me to support my old country on a daily basis through Friends of the IDF.”