Wilmette Public Library Youth Services librarian Lisa Bigelow began writing her second book more than a decade ago. This summer, when Drum Roll, Please finally came out, audiences were ready for a middle grade children’s book with an LGBT protagonist. 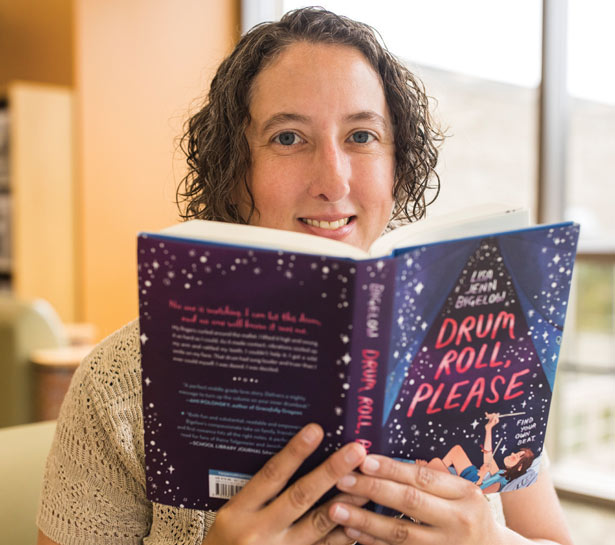 Bigelow, 40, has been thrilled by the response to the book since its release in June.

“I’ve been overjoyed,” she says. “I’ve had people tag me on Instagram, or tell me, ‘Hey, my kid just read this book.’ I’ve been hearing from boys, as well as girls.”

Bigelow’s book follows Melly, a shy drummer whose parents are getting divorced, as she heads to Camp Rockaway for the summer. She has to navigate both a rift with her best friend and a crush on a girl—all while confronting her insecurities as a musician.

“As our society becomes more understanding, open and tolerant of a variety of social issues, there’s a need for books for kids about kids like themselves,” says Steven Chudney, Bigelow’s agent.

When she started writing the book, Bigelow recalls, there were LGBT-themed books for young adults, but none for the middle grade market. The book’s message—that it’s okay to be who you are—grew more cheerful with recent edits.

“I think the emotions I was exploring … I feel like those are things that most of us have to deal with,” Bigelow says. “So, in that way, I think it winds up being somewhat universal.”

Bigelow, a Skokie resident, grew up in Kalamazoo, Michigan, and moved to the Chicago area in 2002. She says she drew on her experiences attending Girl Scout camp and taking classes at the Old Town School of Folk Music to write the book.

She has worked at the Wilmette Public Library for almost 13 years. For Bigelow, it has been a source of inspiration and reading material. Still, on most days, she’s too busy talking to kids, suggesting books, running Story Time or helping patrons locate titles to kick back with a novel.

“Sometimes people have this idea that librarians get to sit at a desk and read, which is not true,” Bigelow says with a laugh. But she makes a concerted effort to keep up with new children’s and young adult releases. And she started a program at Wilmette Public Library that encourages people to read a greater breadth of books.

Bigelow read lots of fantasy books as a kid; the Narnia series was a favorite. More recently, she enjoyed Kelly Yang’s Front Desk, a book about first generation Chinese immigrants.

Bigelow’s reading tastes have broadened over the years, but her writing process hasn’t changed much. She says both of her books were really hard to write.

“I haven’t found it to get easier,” she admits. “I still stress out quite a bit.”

For Drum Roll, Please, Bigelow had to update an earlier version of the story. Her agent helped her dust off the manuscript and revise it.

“The basic and overall storyline is pretty much the same,” Chudney says. “The novel was mostly just polished and tightened.”

No matter how well the book does, Bigelow still loves her day job. She says the library is a fun place to be—surrounded by books, watching kids grow up.

“It’s a really active place at our library, something going on at all times,” she says. “At any moment, you don’t really know what’s going to happen next.”