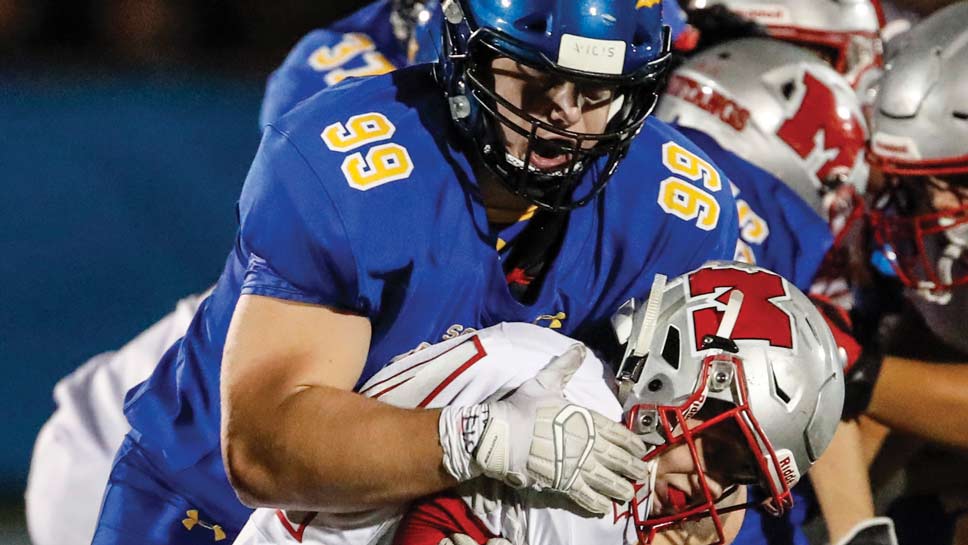 The 6-foot-5, 270-pounder — the No. 99 on his jersey makes him appear even bigger in game action — overwhelmed Mustangs linemen and ball carriers all night in the Scouts’ 39-12 rout. It wasn’t just man vs. boys.

It was also boulder vs. pebbles.

Mills burst through the middle of Mundelein’s offensive line and wrapped his massive arms around junior running back Jack Dorfler in the first quarter. It was an abrupt wrestling takedown on a gridiron. No gain.

He later batted a pass, helped a couple of teammates finish a violent, clean play behind the line the scrimmage, made a tackle for a loss of four yards and disrupted countless other Mundelein plays with his athleticism, balance, strength, determination and presence.

“He’s our biggest, strongest, hardest-working player,” Scouts football coach Chuck Spagnoli said after his squad’s first victory in 2018. “He wants to be successful. He’s better physically and mentally [than in ’17]. What I mean by mentally is, Rylie is much more secure of a player than he was as a sophomore.”

Twenty-four college football programs had offered Mills a scholarship, as of September 7. Twenty-four. Look for that number to grow. Two of the programs: Clemson and reigning national champion Alabama. Mills attended the Michigan-Notre Dame football game on a recruiting trip in South Bend, Indiana, earlier this month. He has attended three Notre Dame games to date, including two last fall. He plans to attend BYU-Wisconsin and Minnesota-Ohio State football games this fall.

“He looks the part [big-time recruit], doesn’t he?” said Scouts assistant football coach Larry Lilja, a former director of strength and conditioning at Northwestern University. “You’d think, with the number of offers he’s received, he’d take his foot off the gas pedal. Not Rylie. His work ethic continues to be outstanding.”

“Rylie is strikingly graceful for such a giant human being.”

Polite Rylie Mills made an appearance after the Mundelein game. A handful of journalists wanted to speak with him, and he kindly asked each if he could do a couple of things before answering questions.

About five minutes later, Mills made himself available but not before saying, “Thank you for being patient.” The Q & A began. It did not matter that he had probably heard some the questions at least a dozen times since the end of his sophomore season. He was patient and courteous and informative.

In the middle of the interview session, Mills spotted Scouts senior running back Jacob Thomas exiting the locker room and shouted, “J.T., our running back!”

Thomas had played a vital role in the win, rushing 26 times for 118 yards and three touchdowns. His second tally covered 75 yards and gave the hosts a 29-6 lead in the first minute of the third quarter.

Indeed. Scouts Ethan Hunt, Mac Uihlein and Tommy Hanson each had an interception. Senior quarterback James Swartout finished 20-for-30 for 205 yards with a pair of TD passes — one to Breck Nowik for 45 yards and the other to Ryan Cekay for two yards. Cekay caught six passes for 68 yards; Nowik totaled 64 yards on five grabs; and senior tight end Crawford Bolton had five receptions for 49 yards.

Senior linebacker Clayton Burton recorded two sacks. Coel Morcott’s tip of a pass preceded Hanson’s pick. Linebacker Will Wisniewski and defensive lineman Ben Marwede each had a hand in the first of the Scouts’ safeties. Placekicker Carter Hiam was 5-for-5 in extra points. Uihlein and Luca Pasinato combined for a sack. Mundelein went 0-for-2 in two-point attempts; Hanson and others stopped the first attempt, and Bill Avery and others thwarted the second.

After fielding football-centric questions, polite Rylie Mills turned into fun-loving Rylie Mills as he answered queries that had nothing to do with football.

“I play the guitar, a little bit,” he said of one of his pastimes. “I’m not terrible.”

He has seen four episodes of The Office.