Bakers Liz and Michael Bearwald got engaged more than 27 years ago. They needed dough. Not the edible kind; the green kind. Currency. 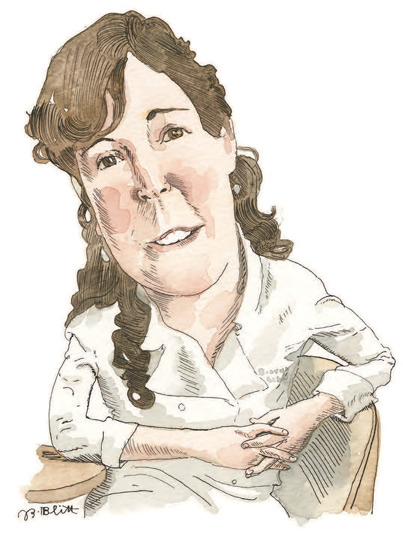 So they made lots and lots of pound cake — 50 flavors of it, no kidding — and sold it out of their home at the time, on Chicago’s North Side. The money helped them pay for their wedding in 1991, as well as for their honeymoon in California.

Liz and Michael Bearwald co-own Bent Fork Bakery in Highwood. If you haven’t heard of it, you’ve certainly caught a whiff of the enticing aroma wafting from its location on Waukegan Road (also Sheridan Road).

Liz, 53, grew up in Glencoe and attended New Trier High School, where she “majored” in ceramics. Michael played football at Glenbrook North High School, captaining the Spartans as a middle linebacker/offensive lineman in his senior season. They live in Highland Park.

“My commute,” Liz says, “takes two minutes.” Liz — hours after waking up at 4:30 a.m. and arriving at work at 5:30 a.m. — meets me at Tala Coffee Roasters in Highwood. She orders a decaf Americano. I discover she loves movies, especially baseball movies.

The two pieces of verbal evidence:

“If we bake it, they will come,” Liz says of the couple’s first business plan, circa 1999, some five years before the couple’s bakery (originally a gift basket shop) settled at its current location.

“There’s no crying in bakeries!” a smiling Liz said one day to a sobbing tot in the store.

“A lot of people who love bakeries, we’ve found, are old-school,” she adds. “They walk in, notice the atmosphere, and it evokes memories, fond ones, from their childhood. I’ve seen customers get wistful and teary-eyed.

“We’re well aware we work in a small community; Highwood … it’s a hidden gem on the North Shore. We become close with our customers, very close. We’ve attended their funerals. We heard of an item a customer of ours ordered a long time ago in Canton, Ohio. So we tried make something like that.”

Bent Fork. There has to be a story behind that name.

“My husband,” Liz says, “would almost always get a bent fork when we’d go out to eat. We had a good friend [Joanne], who told us one day, ‘If you ever open a bakery, you have to call it ‘Bent Fork.’”

Day One of the business started rather inauspiciously. An employee had burnt the bakery’s first-ever batch of chocolate chip cookies. A passerby got wind of the smell and entered the bakery.

“The customer wanted to buy the cookies, those cookies, the burnt ones,” Liz recalls. “She loved burnt cookies and, I found out later, underdone brownies. She kept putting down $10 on the counter to pay for the cookies.

“I refused to take her money.”

Bent Fork’s research and development department is far from a conventional one, Liz notes. It consists of the bakery’s staff of 12, including the Bearwalds.

“Trial and error and eat,” a chuckling Liz says.

Liz’s first experience in baking took place in the kitchen at the home of her best friend. The friends lived on the same block. Liz was 6. Her best friend’s mom, Mrs. Beebe, was the apron-wearing teacher. Li’l Liz made lemon cake, half of it later taste-tested by her parents, Sheffield and Donna.

“Mrs. Beebe taught me to stay focused and to listen and to be patient,” Liz says. “If I did all of those things, she assured me, I’d be rewarded. I made that cake, and a light bulb went off in my head.”

Sheffield, a sweet, American flag-loving man who delivered Bent Fork’s sweets for years — without ever taking a tip — died in 2017. On June 14. Flag Day. Donna passed away in 2004. Her funeral started at 10 a.m. Liz and Michael returned home on that day, after a fax (remember faxes?) had arrived. It was from a Highwood city official.

It was Bent Fork’s certificate of occupation.

Liz thought of her mom again then.

Liz thinks about her mom again at Tala Coffee Roaster.

Liz, a cancer survivor, sees to it that her bakery raises funds for the St. Baldrick’s Foundation, Alex’s Lemonade Stand Foundation and Northern Food Bank every year. Stop by Bent Fork and buy a chocolate chip cookie or two — or 200 — in September.