Sarah Considine drives her MINI Cooper, with the top down, to a Lake Forest High School field hockey team dinner. The senior center-back exits the vehicle and enters the restaurant. She eats. She laughs. She speaks and listens. She laughs some more.

It’s time to return to the parking lot. It had rained, briefly. 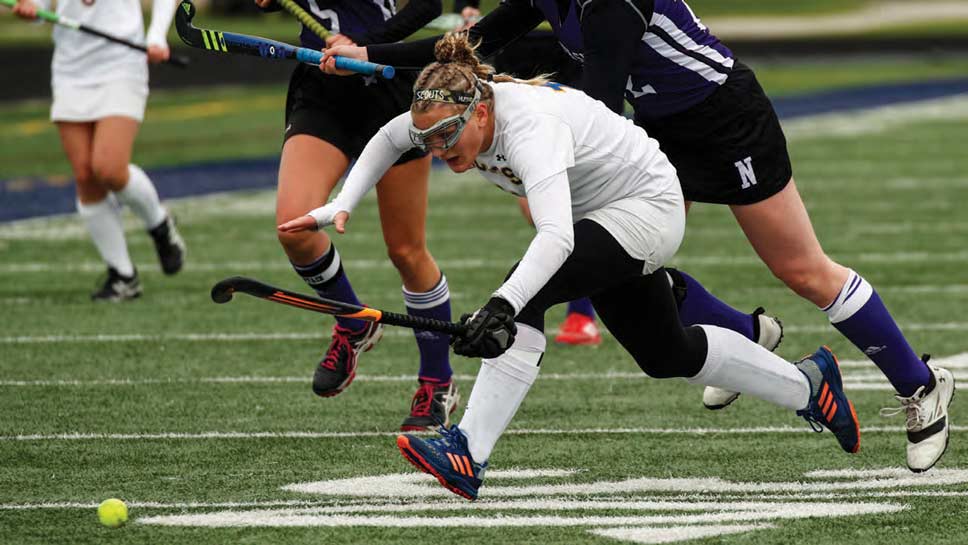 The MINI Cooper’s top is still down. Considine and a few of her teammates near the car. None of the Scouts would have been surprised had a lifeguard been twirling a whistle in an adjacent parking slot. Hello, MINI pool. Considine won’t need waders to drive home, but she might need a pair of flippers.

“It … had … poured,” Lake Forest senior forward Madden Plante recalls. “The interior of her car, everything, was soaked. I was shocked it had rained. I didn’t remember hearing it rain; I don’t think any of us did. Sarah, after looking at the inside of her car, laughed. That was her first reaction — laughter. Then she couldn’t stop laughing.

Considine managed to drive the car to her home in Lake Bluff. Her parents, Kevin and Jami, did not ground their daughter for five years. Did not ground her at all.

“My parents are cool, for sure,” Considine says. “I dried the car out that night. Used fans.”

Fans of LFHS field hockey — field hockey in Illinois, really — know all about the 5-foot-6 Considine, a Columbia University recruit and Windy City Field Hockey club player since eighth grade. An all-stater for the state champion Scouts a year ago and one of only two LFHS sophomores (Plante, too) on the state championship squad in 2016, Considine possesses a calm presence in games, even when the action reaches a chaotic level. Her teammates feed off that placidity, welcoming it and counting on it. Her strength and fitness level? Matchless. Considine usually works out three times a week at Performance Factory Training in Highwood under the guidance of her trainer, Zeus Maldonado, who develops physiques as well as he tones work ethics.

Another one of Considine’s strengths is her voice. A center-back without vocal assertiveness is a car without a steering wheel.

“I had a difficult time using my voice, finding my voice, as a sophomore,” Considine admits. “That was hard for me, telling seniors what to do, where to go, being a leader at that age. That was scary. But I’m comfortable communicating with my teammates now, directing them, encouraging them, and a lot of that has to do with Coach Cat [Catanzaro], one of the best coaches I’ve ever had, truly gifted at what she does. She and [varsity assistant coach Katie Tilton] helped me find my voice as a leader and vastly improved my game.

“Coach Cat, without a doubt, is one of the most important people in my life, and I’m incredibly grateful for her.”

Another Cat, for whom Considine is grateful? Former teammate Cat Nicholson, a 2018 LFHS graduate and freshman field hockey player at the University of Iowa.

“Huge mentor,” Considine, also a varsity lacrosse player (middie/attack), says. “I’ve always looked up to her as a player, as a leader, as a person. She worked incredibly hard in high school. I modeled my work ethic after hers. She’s into nutrition, knowing what fuels the body the best, and she always makes sure she gets enough sleep.”

Two of Considine’s cousins, Woodland Academy graduates Colleen and Margaret Andersen, opened her eyes to the sport of field hockey. Considine was a second-grader at the time. After watching her first official field hockey game at WA in Lake Forest, Considine blurted a request to her father.

Dad Considine knew a thing or two about ice hockey, so exchanging passes with his field-hockey- stick-wielding daughter on the Considine property wasn’t a stretch for him. It didn’t take Sarah long to execute “cool tricks” with a ball and her first stick, borrowed from Margaret.

Experiences in travel field hockey with Windy City, beginning in eighth grade, added dimensions to her game. Windy City Owner and Director Katie Beach was a member of the USA National Field Hockey Team from 1994-2004, representing her country at the 1996 Summer Olympic Games in Atlanta. The more Considine played, the more she wanted the opportunity to play college field hockey.

That led her to Maldonado at Performance Factory Training.

“Zeus helped bring me to the next level athletically,” says Considine, who scored a goal, on a penalty shot, in Lake Forest’s 6-0 defeat of visiting Arrowhead (Wisconsin) High School Aug. 25.

“Without a doubt, I would not be where I am today without him.”

“Extremely coachable, extremely hardworking,” Catanzaro says of her captain. “To be an effective center-back, you have to distribute the ball well, be patient. Sarah, a selfless player, does those things for us. What’s also great about her is her easygoing nature, along with her modesty.

“You would never know she’s good at anything if you talked with her.”

Last winter Considine and several of her field hockey teammates proved they’re very good at basketball, too. Her intramural squad — Baby Got Backboard — topped a team named Average Joes for the championship. Considine dribbled around as a guard.

“Aggressive, fast, a very good shooter,” Plante, who notched a hat trick in each of the Scouts’ first two games, says of Considine’s hoops skills. “She hadn’t played basketball in years, but you never would have known that had you seen her play.”

Considine, all dry now (to match her car’s condition), reigns — in two sports.

Notable: Junior forward Julia Hender and senior midfielder Johanna Sidles each tallied a goal in Lake Forest High School’s 6-0 defeat of visiting Arrowhead High School Aug. 25. The Scouts struck for four goals in a 4:30 span in the second half. Sidles also had a team-high six takeaways in the victory. Scouts Heidi Richardson and Elsa Goldsberry shared time in goal.