An uncle of Lake Forest sisters Sofia Perez Westmeyer and Astrid Perez Piccolo had to climb onto his roof in Puerto Rico last year — to make a phone call.

And deliver good news to the nieces. 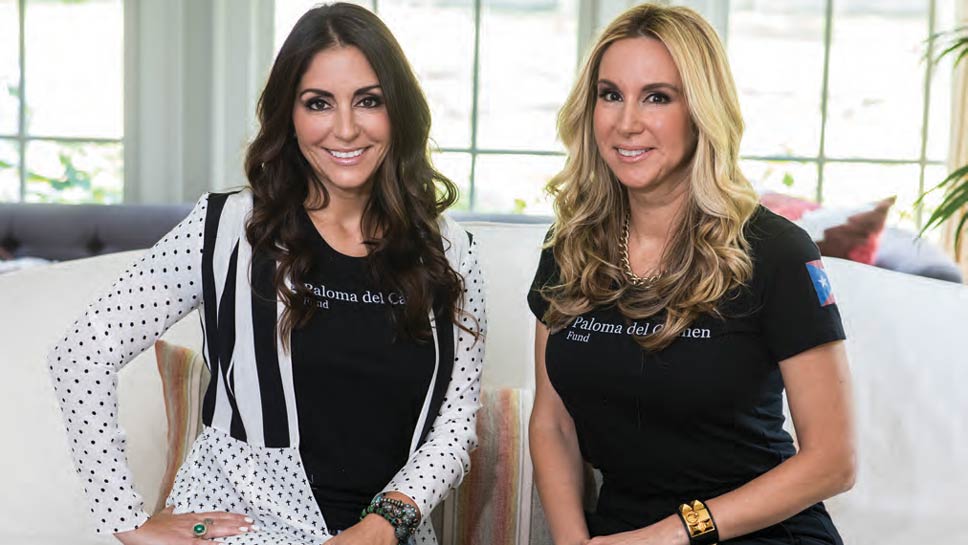 The uncle, a civil engineer, his wife and other relatives had survived Hurricane Maria, considered the worst storm to hit the sisters’ native land in nearly 100 years. Maria and an earlier hurricane, Irma, had devastated Puerto Rico in a span of two weeks in September.

“Whenever we offered to help our aunt, uncle and cousins leave Puerto Rico,” Westmeyer recalled, “they said, ‘No, this is where we live, and we need to be part of the reconstruction. We cannot leave.’”

But the sisters found another way to help — and it had nothing to do with welcoming Puerto Ricans to safer ground. Westmeyer and Piccolo created the Paloma del Carmen Fund to aid Puerto Rican farmers. The fund has raised more than $350,000 for much needed supplies and equipment, with approximately $150,000 in aid earmarked for the rebuilding and sustainability of farms, providing important local food sources to Puerto Ricans.

When the sisters visited Puerto Rico in February, they were shocked to find many areas still had no electricity, but that didn’t seem to deter many of the U.S. territory’s farmers.

Piccolo explained that one of the farmers who grows coffee, cacao and plantain didn’t have electricity at his house, but he could not have been happier working the land. And he was grateful for his health.

“He told us that this experience brought communities back together,” Piccolo said. “No one is on their phones; no one is using any kind of device. The farmers are just helping each other.”

Piccolo said she started crying upon hearing how the farmer could turn something so terrible into something so positive. The farmer then gave the sisters a tour of his farm, and his wife made them a delicious homemade meal for lunch.

Piccolo, for a moment, couldn’t remember who was helping whom.

Another farmer, who had 25 acres of passion fruit, was in tears. He greeted the sisters with a passion fruit tree — the first that had bee

n planted on his farm after the hurricanes. He dubbed it “The Paloma del Carmen tree,” in honor of the fund.

The sisters wanted to give the people of Puerto Rico part of their livelihood back, so they decided to help the agricultural center, which had lost 80 to 90 percent of its crops.

Westmeyer read about the program Seed Relief Puerto Rico, launched by Dr. Viviana Medina, who has a Ph.D. in horticulture. The sisters decided to team up with her.

“Dr. Medina helped us identify the publications that were in the industry, and once the news spread that we were helping the farmers, we received more donations,” Piccolo recounted.

“We work on rebuilding the farms to help get them back in business.”

The sisters were thrilled to be reunited with their aunt and uncle during their February visit to Puerto Rico. Dr. Medina joined them. Most of the farmers in the area hadn’t received any kind of aid until the sisters’ Paloma del Carmen Fund issued the vital assistance. The farmers are using the funds for trees, greenhouses and irrigation systems.

Piccolo shared another story of resiliency involving the mayor of San Sebastian.

The mayor said at a gathering of the municipality’s residents, “We’re not going to wait for any government to come put up our electricity; we are going to do it ourselves.”

Then he asked for a show of hands from people who work for the electrical company. San Sebastian emerged as the first town to restore its electrical light posts to working order.

The sisters are grateful for all the support they’ve received — especially from the Lake Forest community.

Recently the Lake Forest International Club chose the Paloma del Carmen Fund as its charity, and the sisters’ mom hosted a successful fundraiser at her Lake Forest home.

In addition, a close friend from Lake Forest introduced the sisters to a Puerto Rican model with the Ford agency. The woman hosted a beautiful event in Chicago that raised more than $20,000 for the fund.

“Having the community support us really meant the world,” Piccolo said.

Westmeyer’s husband’s company, MB Healthcare, has matched up to $50,000 of any donation and will stay committed to doing the match.

The sisters are also helping Puerto Rican fishermen repair piers. Each of the four fishermen associations in Puerto Rico has between 16 to 40 fishermen. Piccolo explained that in Puerto Rico the fishermen can’t come to the shore to unload, so upon returning from a late-night fishing trip, the fishermen have to swim to shore while dragging their fish-filled coolers along with them.

The sisters have a close friend, a fisherman, and he ensures that every dollar given to the associations goes toward the restoration of the piers.

Westmeyer and Piccolo enjoyed accompanying their families to their native land on their second visit following Hurricane Maria.

During that trip, last spring, the roads were clean, and it was lush and green, unlike the sisters’ previous visit when all of the greenery had been destroyed by the hurricanes.

Piccolo said the Puerto Rican farmers text the sisters saying, “Look at my crops now. Look at my growing trees.” She finds it very rewarding to see what they’ve been able to do with the materials the Paloma del Carmen fund had given them.

Though the sisters have helped more than 50 farms, they show no evidence of slowing down.

“We’re in this for the long term,” Westmeyer said. “We’re finalizing a business plan with the help of Dr. Medina and other professionals to look at the industry as a whole and to work on a farm-to-table movement.”