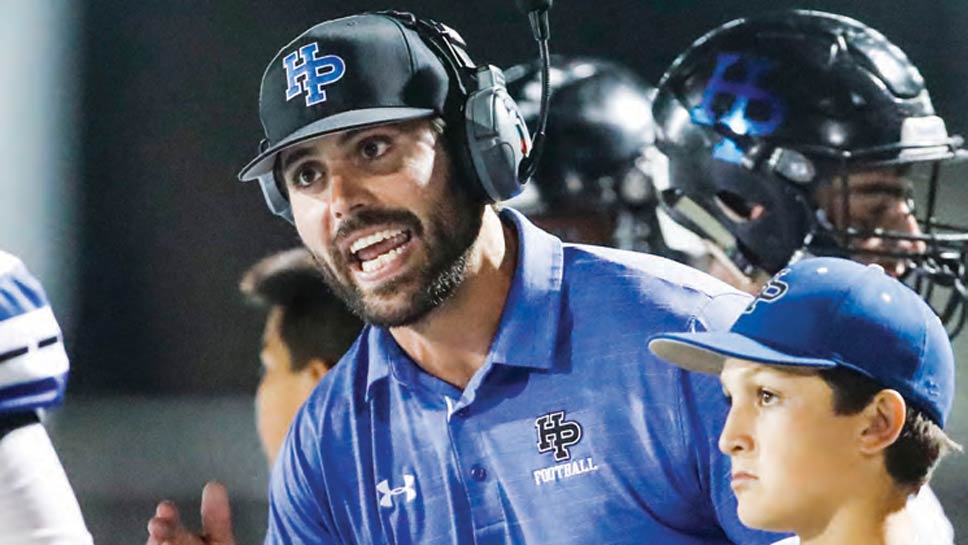 He was clean-shaven in college. He now sports a spot-on Jimmie Johnson beard and could easily steal scenes in an action movie starring Dwayne “The Rock” Johnson.

Put a helmet on Lindquist today and then make the 2004 HPHS graduate don pads and a full football uniform, and he’d still frighten — without even moving an inch — a muscular, beefy lineman at a line of scrimmage.

Or a fleet quarterback preparing to collect a snap.

“I’d like to think,” the HP senior quarterback said, “I could outrun him.” Lindquist, also a special education teacher at the school, loves that kind of attitude. It’s one of the controllables he espouses at practices, in games and in classrooms. Three other controllables: effort, focus, resolve.

“Our guys … they’re buying in and working hard and listening,” said Lindquist, who succeeded Joe Horeni (now the head football coach at Downers Grove North) after having served in a number of football coaching positions at his high school alma mater from 2010-2017.

The David Lindquist Era at HPHS got off to a thrilling start last weekend, his Giants edging host Libertyville High School 28-27 in overtime Aug. 24. HP senior running back/middle linebacker Tom Motzko rushed a busy 38 times for 213 yards and four touchdowns, all but one (a nine-yarder) of the scores covering one yard. The Giants’ offensive linemen — Chris Hernandez (for injured Tate Ellis), Kevin Kaufman, Jonny Lipman, Chris Lee (Charlie Lens filled in briefly for Lee in the first half) and Sam Fishman — eradicated Wildcats all night.

Libertyville’s placekicker clanked an 18-yard field goal attempt off the left upright with 4.4 seconds left in regulation, freezing the score at 21-21. Kaufman blocked the extra point after the Wildcats’ OT-opening score, and Lindquist’s career winning percentage as a prep head football coach improved to a tidy 1.000 when Max Mauer’s extra-point try split the uprights following Motzko’s one-yard burst in OT.

A proud Lindquist gathered his Giants for a post-game talk and praised them for their resolve — a word his position coach at Illinois, former NFL defensive tackle Tom Sims, liked to bark in position meetings and along the sidelines.

After the talk the players presented a game ball to Lindquist near an end zone.

“Maybe I’ll build a trophy case in my basement, my man cave, and put this ball in it,” said Lindquist, who tempered his elation on the program’s big night by reminding his gridders that the win wouldn’t mean much if his club were to play with little resolve in its home opener vs. Lakes High School (Aug. 31, 7 p.m.), which beat Deerfield High School 21-14 last weekend.

“We have to keep rolling,” Lindquist, a Park Ridge resident, said.

Lindquist, also a former standout hockey and lacrosse player at HPHS, could have rocked as a full-ride scholarship football player at Eastern Illinois University. But his dream was to play football for a Big Ten school, just like his fatherJohn did. John Lindquist played football at Michigan State in the late 1960s, after becoming, as a quarterback, the first Deerfield High School student-athlete — in any sport — to earn all-state status.

A determined David Lindquist showed up at Illinois’ campus in Champaign as a preferred walk-on in late summer 2004. He eventually received a football scholarship and made two solo tackles in Illinois’ 49-17 loss to USC in the 2008 Rose Bowl. Nearly 94,000 people attended the New Year’s Day game in Pasadena, Calif.

“My dad,” David said, “was big and imposing. He knew I wanted to be like him. Big influence. My dad had a big influence on me.”

Seven of his 11 coaches have ties to Highland Park (the school or the city), including receivers coach Jim Berardi, who coached a Little Giants football player named Davey Lindquist in Lindquist’s seventh- and eighth-grade seasons.

“He’s a force, a beast,” said Lipman, the Giants’ starting center. “Coach Lindquist runs with us, lifts with us. He can keep up with us. He’s such a good guy and such a competitive guy. Believe me, he knows how to get us ready to play football. And he’s all about the foundation of the program, the history of it, where he wants to take it.

Watch Lindquist, 32, around his players. Anywhere. He does not have to yell to get their attention. They see a former Giant, a former Illini, a current mentor. They look right at him; he returns the look, darting his eyes to the right and to the left and to the right again to make sure he gets his point across to more than one Giant.

“People respect him because he’s a great coach, a great leader and a great person,” Rooney, the QB, said. “The way he carries himself … people notice that way and respect him, immediately.”

“The players admire David, look up to him,” Ray Finfer said. “He doesn’t make his players do anything he couldn’t do, and he holds each player accountable.

“He’s excited about his new job,” Finfer added. “The administration is excited he’s in charge. And I certainly know his players are excited to play for him.”

Notable: Giants lineman Sam Fishman made the first play of the Coach David Lindquist Era, stopping a Wildcats kick returner at the Libertyville 43-yard line in HP’s season-opening 28-27 OT victory on the road Aug. 24. … HP running back Jared Bloom rushed nine times for 62 yards. … HP defensive end Noa Morgenstern recorded a tackle for loss and a sack on consecutive plays near the end of the second quarter. Libertyville lost a combined eight yards on the plays. … Giants lineman Kevin Kaufman had a first-quarter sack, teammate Max Mauer, a kicker/linebacker, stopped a ball carrier three yards behind the line of scrimmage, and HP linebacker Giovanni Volpentesta broke up a pass in the end zone. … Giants running back/defensive back Zion Griffin returned a punt 31 yards early in the fourth quarter.