Jennifer Berardi, a sixth-grader at the time, pulls out a five-iron from her golf bag, her instructor standing nearby. Berardi addresses the ball, strikes the ball.

It is deemed somewhere between a beautiful shot and a perfect shot by the gallery — or, on this day, Berardi’s instructor.

“Funny story … I hated golf at first,” Berardi, now a senior at Highland Park High School, admits. “I hated golf at the time I hit that shot. My teaching pro said to me, right after that shot, ‘If you don’t continue to play golf, I’ll be mad.’ ”

Berardi opts to stick with golf.

Highland Park girls varsity golf coach Cathy Nachman, for one. Fourth-year varsity member Berardi carded a two-over-par and personal-best 73 (eighth-place tie) at the Barrington Invitational at Bonnie Dundee Golf Club in Carpentersville on Aug. 9 and followed that up a day later with a crisp nine-hole round of 37 in a dual with Libertyville High School at Willow Glen GC in North Chicago.

HPHS (23-over-par) finished in a tie for first place with Naperville North at the invite and defeated LHS 157-171.

“Tenacious,” Nachman says of the 5-foot-8 Berardi, also a varsity basketball player. “But she’s quiet, goes about her business on the golf course.”

In 2015 Jennifer Berardi became the fourth Berardi sister — as a freshman — to have teed it up for a Nachman squad, following Jacki (24 years old), Tina (23) and Nicole (19). This fall marks the 11th consecutive varsity season in which at least one Berardi clubbed shots for the Giants’ girls varsity. Tina (HPHS, Class of 2013), a first-year volunteer varsity assistant under Nachman, helped HP’s 2011 team place a program-best third at the Class 2A state tournament.

“Ever since Jennifer was little, she’s had an extremely beautiful swing,” says Tina Berardi, who played Division III golf at Denison (Ohio) University after earning Most Improved Player honors, twice, in high school. “That always seemed unfair to me and my other sisters, her beautiful swing. We’d ask Jennifer, ‘How did you get that really nice swing?’

“She gained a lot of confidence this summer at the Badger golf camp [at the University of Wisconsin],” Tina adds. “Jennifer learned new drills, putting- and chipping-related, and different ways to practice on the range up there. Her practice sessions became more structured, more focused, because of what she experienced at the camp.”

Jennifer Berardi shot an 87 at a Class 2A regional in Palatine last fall, good enough to secure a sectional at-large berth. The Giants’ other sectional qualifier, then-junior Julia Shafir, toured the same track in 83 strokes.

Berardi and Shafir, the Giants’ lone state qualifier in 2017, have shared team No. 1 status in the young 2018 season.

It’s easy to tell the two apart. One wears a serpentine, cumbersome-looking brace on her left knee. It belongs to Berardi, who, as a guard, suffered an anterior cruciate ligament injury last winter during her junior basketball season; she had suffered a right ACL tear in grade school.

“I might try to play basketball with the brace this winter,” Berardi, a quick hoopster with outstanding passing skills, says.

“For years Jennifer tried,” Tina continues, “to insert herself into our conversations during dinnertime.”

Jim Berardi — receivers coach for new HPHS varsity football coach David Lindquist — wanted all of his daughters to be able to talk golf. At the dinner table. Outside the house. Anywhere, really. The avid, low-handicap golfer and former HPHS head freshman football coach introduced the sport to each of them. Jacki ended up playing Division I golf at the University of Dayton, where Nicole competes as a club golfer.

Music has been on Jennifer Berardi’s mind lately. The Highland Park High School theatre department named her a co-head writer of the STUNTS musical, Uncharted, set to begin its run in November. Too bad it isn’t Bye Bye Birdie (Hello Eagle). She also enjoys photography and reading National Geographic. Berardi might major in atmospheric sciences and meteorology in college.

Her forecast for her last Giants golf team?

“I’ve been impressed; we should be a solid team all season,” says Berardi, whose plummeting golf scores could be attributed to her soaring confidence. “Our freshmen are doing well already, and our sophomores worked hard on their games in the offseason.” 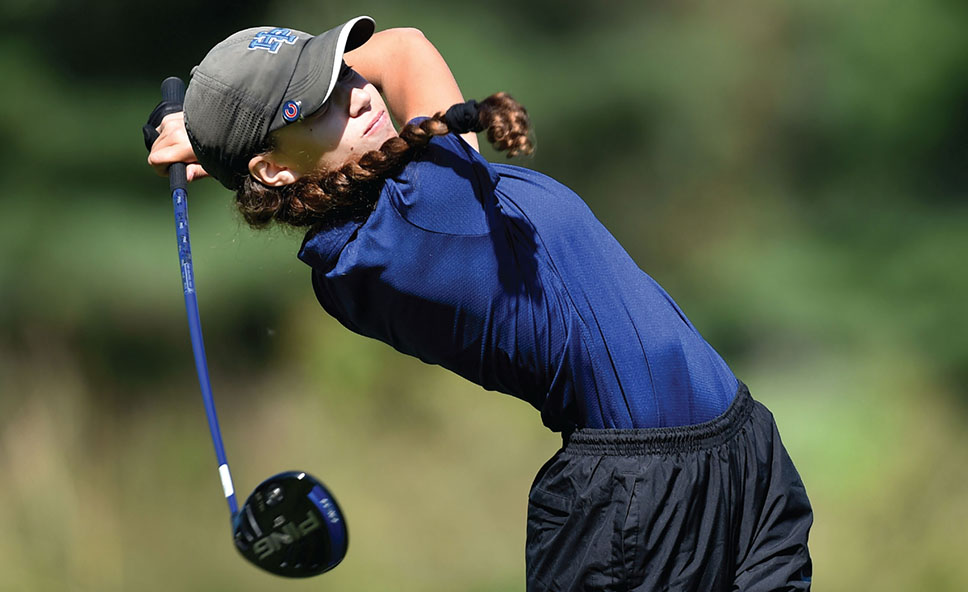