Carolyn Grevers’ white lab coat still hangs in a closet in her Evanston home. She last wore it, as a scientist, in 2004, maybe in 2005, while conducting research at Rosalind Franklin University of Medicine and Science in North Chicago.

Her name appears at the bottom of a research article — “Repeated Cocaine Administration Increases Membrane Excitability of Pyramidal Neurons in the Rat Medial Prefrontal Cortex” — published in The Journal of Pharmacology and Experimental Therapeutics.

Grevers, 39, sits poolside in Lake Forest High School’s natatorium on an August morning, minutes removed from conducting a preseasonpractice for her 2018 Scouts varsity girls swimming squad. This is her laboratory today, her workplace, swimmers churning lap after lap, swimmers experimenting with new techniques.

“When I swam competitively, in age group meets, in high school, I did not love it,” admits Grevers, who raced for swimming teams at Warren Township High School in Gurnee for three seasons before transferring to LFHS for her senior season, in 1996. “Hard … swimming was hard, every day, hours and hours of training, doing all I could to motivate myself and be ready for meets.”

Honesty. It’s one of Grevers’ appealing traits. She’s honest with her family and with her swimmers and with her coaches. With everybody in her life. Straight shooters are winners. You sense, if she could reboot her competitive swimming career, she’d work hard in the water and in the weight room like she did in the 1990s, but she’d also make sure she had enough energy left to fully embrace the other opportunities available to her.

The call to return to the pool — to trade looking down a microscope for looking up at swimmers’ times on a natatorium’s scoreboard — intrigued her.

“Lo and behold,” Grevers says, “I’m coaching swimmers, thanks to Lea, and I loved it, loved motivating boys and girls to become the best swimmers they could be. But I don’t just enjoy the coaching aspect. One of my objectives each season is to help my swimmers find that balance — that all-important ability to balance academics, swimming, other activities. ‘It’s better to be well-rounded’ is something I’ve been telling my swimmers, emphasizing to my swimmers, for years; you’re a better, happier person when you’re well-rounded.”

Grevers sped to a combined eight top-seven medals in three state meets, bowing for half of them, including two silvers (50-yard freestyle, 400 free relay) at the end of her only LFHS season. A year after becoming the first Warren Blue Devils swimmer — male or female — to qualify for a state swimming meet in 1994, she zipped to state runner-up honors in the 100 breaststroke. Grevers still holds the school record in the 100 breaststroke (1:06-something) at Warren and set the University of Kansas women’s swimming program mark (since broken) in the 100-meter breaststroke.

“ ‘Flash’ … I still call Carolyn ‘Flash’, because she was such a fast swimmer when I coached her,” says LFHS boys varsity swimming coach and LFHS girls varsity assistant coach Cindy Dell, who coached Grevers when Grevers was a Lake Forest Swim Club member. “She’s even ‘Flash’ on my phone, in my contacts. Such a hard worker as a youth swimmer, Carolyn. Her work ethic was unmatched. She had it all — the natural talent and the desire and the willingness to put in the work no matter how hard it got. Never liked the spotlight, and that made Carolyn an unsung hero in my mind. Humble, incredibly humble, and smart, super smart. She was a scientist. As a coach she’s been recognized with awards nationally and in Illinois. But you’ll never hear her talk about those honors, because she’s never been about accolades.

Scouts junior Kendra Joachim, a butterflyer and a distance freestyler, has shared her interest in science with Grevers, who has shared her experiences at Rosalind Franklin University with Joachim.

“You can talk to her about anything,” Joachim says. “If you’re struggling, with anything, she’s there for you, ready to listen. She’s good at reminding us to do our best and to be strong for our teammates. Carolyn keeps us positive.”

Scouts senior breaststroker/individual medley racer Katherine Slover sought Grevers’ counsel on deck immediately after being disqualified in an event at a sectional meet last fall. Grevers settled a distraught Slover down and told her to swim off her frustration in cool-down laps.

“She also told me it wouldn’t do any good to think about it or to dwell on it,” Slover recalls.

Scouts sophomore flyer and sprinter Kathryn Meier dealt with an injury for a portion of her freshman season. There to support her, to check in with her for updates, to adjust Meier’s schedule because of Meier’s rehab time with a trainer?

“Carolyn,” Dell says, “wants her swimmers to be good citizens and to represent themselves well as students and as athletes.”

Grevers, who qualified to swim in the 100-meter breaststroke at the U.S. Olympic Trials in 2000, works out every day, usually from 1-3 p.m., the first hour devoted to time on a stationary bike while reading a romance novel. Or a sci-fi book that had been recommended to her by one or both of her brothers.

She coaches, she bikes, she reads and she cooks.

Never been better, never been happier. 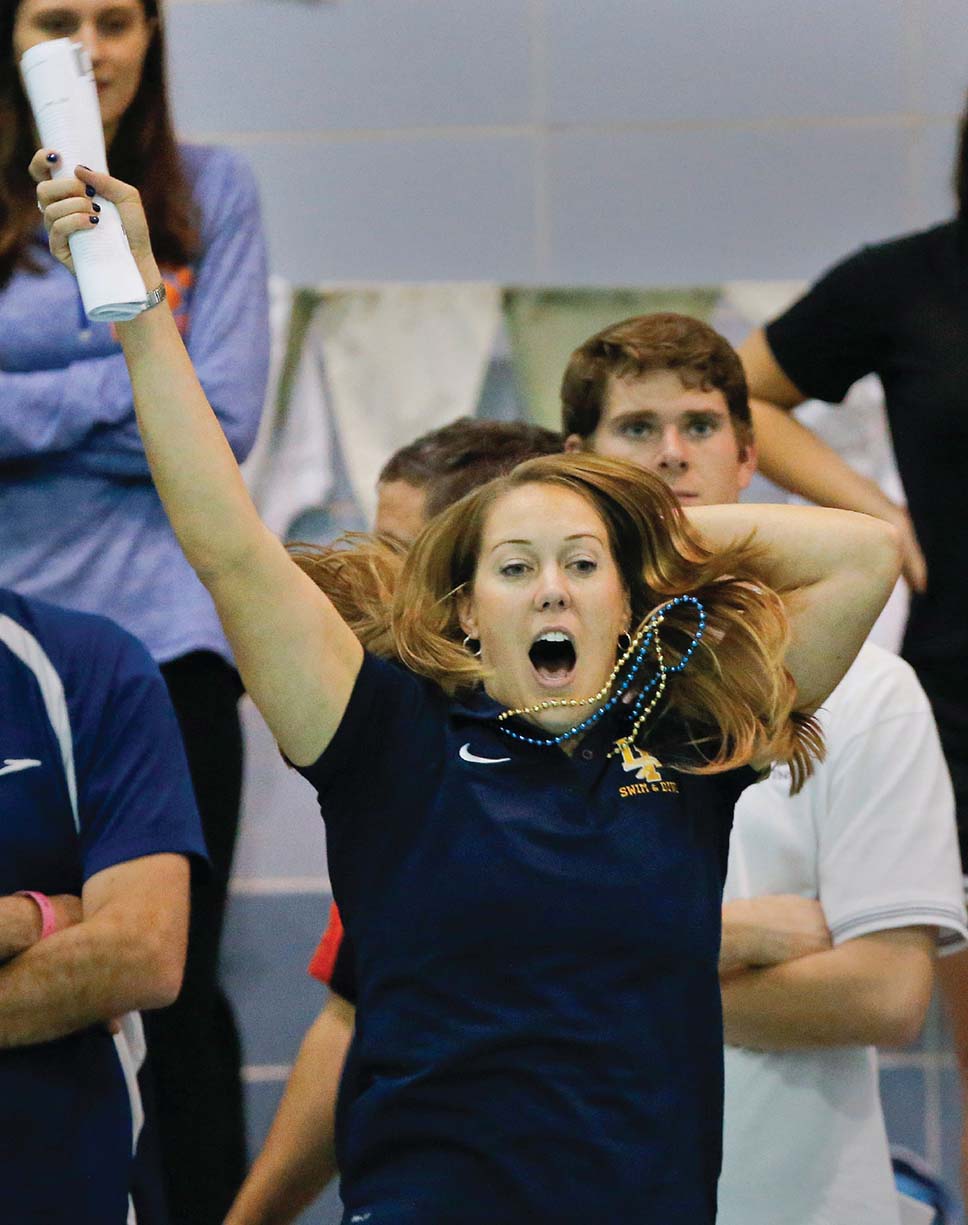