The boy who grew up in a Highland Park house filled with books everywhere, on every floor, liked to read the sports section in the newspaper every day. A young Daniel Greene ate cereal and consumed printed stats or game stories or columns, oftentimes simultaneously. 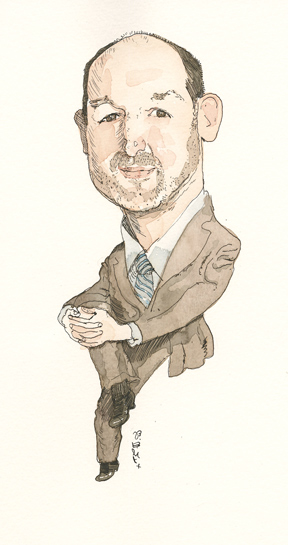 Greene’s mom, Carol, was a high school teacher, his dad, Alan, an attorney. Was either parent concerned that Daniel would fail a Civil War test in history class because he might have spent too much time reading about college football’s annual Civil War (University of Oregon vs. Oregon State University)?

“My parents’ thinking,” recalls Greene, now 45, was, At least he’s reading something.”

Mom and Dad Greene eventually took their son on family field trips to museums. Daniel entered art museums and historical museums and other homes of relics, some of them located out-of- state. Suddenly Andre Dawson’s homer total in a Chicago Cubs uniform wasn’t as interesting as the Colonial Williamsburg historic district in Virginia was.

“I visited dozens of museums with my parents,” says a grateful Greene, an Evanston resident since 2008.

“We’re a museum family,” Daniel Greene, also an adjunct professor of history at Northwestern University, says, having ordered coffee, scrambled eggs and a biscuit at Cupitol Coffee & Eatery in Evanston.

Four years ago USHMM named Greene one of nine researchers to examine the motives, pressures and fears that shaped Americans’ responses to Nazism, war and the persecution and murder of Jews in Europe during the 1930s and ’40s. The extensive project resulted in USHMM’s latest exhibition, Americans and the Holocaust, with Greene often traveling to D.C. two or three times a month to fulfill his duties. The exhibition opened in April to mark the museum’s 25th anniversary (under the banner “Never Stop Asking Why”), and it will be featured there until 2021.

Greene will co-lead a mission to USHMM September 12-13.

“Our order, from the museum’s leadership, was, ‘Tell a new story,’ ” says Greene, who, during the undertaking, kept teaching at NU but stepped down from an enviable research post he had held at Newberry Library in Chicago. “An important component of the exhibition is to transport visitors back to such a turbulent era. We show people what America looked like in the 1930s and 1940s. People felt threatened, economically, thinking refugees, if the number grew, would take jobs here, too many jobs. Isolationist sentiment was strong. The priority of our government’s leadership wasn’t to rescue Jews; it was to defeat Nazism and end World War II as soon as possible.

“Hollywood,” he adds, “focused on Nazism’s threat to democracy, not on what was happening to millions of Jews in Europe.”

A couple of history teachers at Highland Park High School inspired Greene. Debates about all kinds of topics stirred him in the classroom, made him think, encouraged engagement. Dates? Such and such happened on such and such a date. Boring. Counterproductive. The history teachers Greene liked thought making students memorize dates stifled learning and quashed the thorough examination of significant issues in history.

“One of the best things at my high school was its theater department,” says Greene, who also performed on stage as a student at Wesleyan University in Middletown, Connecticut, before earning his Ph.D. in history at the University of Chicago in 2004. “The theater department at Highland Park High School was vibrant, amazing, with outstanding teachers who challenged their students. I’m sure that hasn’t changed. Enjoying history and theater like I did then and still do … it helps having that combination of passions if you’re a history teacher. You sometimes have to be a bit of a performer in a classroom to help students become interested in a subject. And inquisitive.

Greene has invited Holocaust survivors to speak to his history students at NU. If a survivor had written a book, Greene assigns the book to his students before the survivor’s appearance. It wasn’t unusual for Greene, from 2014 until the completion of the exhibition Americans and the Holocaust, to lead a lively discussion about Americans’ response to the Holocaust in a classroom at NU and tackle the same subject with his USHMM team of researchers two days later in D.C.

“For 20 years I’ve been studying the Holocaust,” Greene says. “Getting to know Holocaust survivors has been a privilege. To be able to tell their stories to others — also a privilege. It motivates me. Unfortunately we’re losing survivors; maybe 15 years from now none will be alive.”

The late writer/professor/political activist/Nobel Laureate Elie Wiesel, a Holocaust survivor, spoke at the opening of the United States Holocaust Memorial Museum 25 years ago. The eloquent man asked many questions in his speech, including, “And for me, a man who grew up in a religion, the Jewish religion, a man who his entire life thought that God was everywhere, how is it that man’s silence [throughout the Holocaust] was matched by God’s?

“Oh, I don’t believe there are answers,” he continued on that day in April. “There are no answers. And this museum is not an answer; it is a question mark. If there is a response, it is a response in responsibility.”

Greene asks questions. It’s what historians do. He asks them in his classrooms, in museums, in a … restaurant in Evanston.

“What did Americans know about Nazism?” he asks. “And when did they know about it? And why wasn’t more done to rescue the Jews of Europe? Why didn’t the rescue of Jews become a priority, except for a few outliers who went against the grain to help refugees?

For more information about the September 12-13 mission trip to the United States Holocaust Memorial Museum in Washington, D.C., including a guided tour of its newest exhibition, Americans and the Holocaust, please visit ushmm.org/online/calendar.