Barcelona’s “Michigan Avenue” is Passeig de Gràcia. Ask Claudia Miller all about it, the one who compared it to Chicago’s Magnificent Mile. The North Shore Country Day School sophomore-to-be and tennis standout spent time in the Catalonia region of Spain with family members during her gap year before her freshman year. 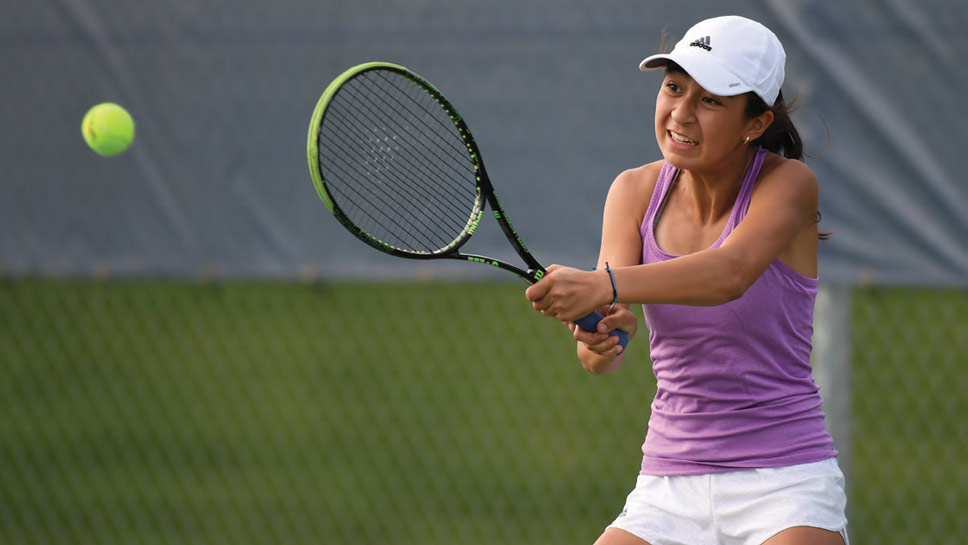 La Rambla? Another bustling commercial district, with a tree-lined pedestrian mall, in Barcelona?

“Some,” Miller says, “call that the ‘Michigan Avenue’ of Barcelona. Probably because it’s easier to pronounce.”

The same Claudia Miller completed a two-week course — “Fashion/Food Culture/Film” — at the School of The New York Times this summer. The Raiders’ 5-foot-8 No. 1 singles player toured New York City, hit the Garment District, learned from guest speakers and lecturers, entered museums, ate at all kinds of restaurants. Just last month, in between her matches at a national tennis event in Oklahoma City, the same Claudia Miller found the time to visit the Outdoor Symbolic Memorial, built where the Alfred P. Murrah Building once stood. A domestic terrorist bombing destroyed one-third of the building and killed nearly 170 people in 1995.

Have racket, will travel. And learn. A lot.

“I was fortunate, getting the opportunity to travel to Spain and stay there as long as I did,” Miller, a Glencoe resident, says. “I’ve traveled a lot; I love to travel. Saw my cousins in Maui not too long ago. I like new experiences, like trying different things. I’m open to doing different things, especially if I get to do them with my family. Our family [mom Sonya, dad David, little sister Vivian], it’s close, very close. I’m best friends with my sister [a freshman-to-be at NSCDS and another ace tennis player]. All of us are regulars at the Evanston Farmers Market.

The worldly, exceptionally mature and thoughtful Claudia Miller and her teammates traveled to Buffalo Grove, Illinois, last fall and collected a basketful of medals at the Class 1A state tennis tournament.

Plus a championship plaque.

Never before had a NSCDS girls sports team captured a state championship.

“Claudia was a huge component of that team, not all of it related to the wonderful things she did on the court,” says former Raiders girls tennis coach Nazlie Green, who guided the program from 2009-16 and continues to serve as an assistant coach at the Winnetka school. “She helped keep the team focused, instilled confidence and drive in her teammates. Claudia is a big hitter who is not afraid to go for big shots, and she’s coachable, with a deep understanding of the game and a willingness to constantly work on her game.

“People, traditionally, think of tennis as an individual sport,” Green adds. “Claudia, I noticed, competed with extra fire when she played tennis for a team, for her school. All last season, after her matches, she’d check in, court to court, to get updates on her teammates’ scores, to motivate them, to support them, to ask them, ‘What do you need?’”

Miller, along with her sister, played for one of four Midwest teams at that Oklahoma City tennis event last month, going 5-0 in doubles (with three partners), 1-0 in mixed doubles and 3-2 in singles. Her crew placed third at the 12-team gathering. Achieving perfection in doubles thrilled her more than any of her wins in singles did. Midwest teammate alongside Miller, with other Midwest teammates rooting for both. The dynamic raised Miller’s game and added between 10-20 mph to her adrenaline flow.

“The team aspect of tennis excited me there, just like it did whenever our North Shore Country Day team played last fall,” says Miller, nationally ranked in singles in the 18-and-under age division — even though she’s young enough to compete against 16-and-under netters. “I’m really looking forward to playing high school tennis with my sister. She’s more aggressive in matches than I am. Powerful player. We’re pretty similar, in general, though she tops me in art, in the creativity department. Vivian is really good at art.”

“I knew she was a special player early in the season,” Golden recalls. “Our first dual, against [Chicago] University High, Claudia faced a really nice, strong player. Claudia battled, went toe-to-toe with her, pulled out the victory. Claudia … such a solid, fierce competitor. She forces opponents to beat her; she doesn’t beat herself in matches. Strong off the ground, quite strong. Good kid, solid kid. Hard worker. Claudia definitely wanted to get better every day, just like the rest of our team did.”

“She listens to me and works often with me on the parts of my game I want to improve,” says Miller, a figure skater in her pre-tennis days and a huge fan of Grand Slam champions Serena Williams (“So inspiring,” she says) and Roger Federer (“Super intense, super focused, with a really good on-court personality.”). “I’m trying to fix some little things on my serve, on my groundstrokes. I want to develop more variety as a server, being able to rely on slices, kicks. I’d like to become a better all-court player. Doubles? I’m better at doubles, more confident as a doubles player, because of all those doubles matches I played in Oklahoma City.”

Miller has vivid memories of the day she first attempted to serve a tennis ball from just behind the baseline. She was five years old, maybe six. The distance from the baseline to the other side of the net must have seemed like the distance from Glencoe to Barcelona to her.

Miller, undaunted, tossed the ball above her head.