Budding entrepreneur Annika Huprikar loves family board games and has a desire to teach healthy eating habits to youngsters.

She combined both passions two summers ago, designing the board game FRUGGIE (for FRUITS and VEGETABLES).

Huprikar, only a freshman-to-be at Deerfield High School in the summer of 2016, sought to come up with a fun, engaging product that would help combat obesity among children by espousing the consumption of fruits and vegetables before chips and candy.

“I wanted to build a board game that promotes family interaction, which I think is super important,” says Huprikar, now 16. “I know that obesity is a prevalent problem in our nation, especially among children, and it’s even harder to reverse eating habits when you get to be an adult.”

According to the Centers for Disease Control and Prevention (CDC), obesity now affects one in six children and adolescents in the United States. Childhood obesity can lead to serious medical conditions, including high blood pressure, high cholesterol, Type 2 diabetes and asthma.

Huprikar started researching and collecting data for a six-month project in October 2016. She worked with DHS Science Department Chair Judi Luepke, who was instrumental in finding participants for the study. Ten local participants, ages three to seven, were targeted for her board game research for a very good reason.

“Because,” Huprikar says, “that’s the age where parents are starting to have their children eat different foods.”

FRUGGIE players roll dice and move across the board using their fruit and vegetable game pieces, all of which were created on a 3D printer. Options include landing on anything from a blank space to a board game space with the instruction, “Move two slices of an apple.”

The real challenge is when players are faced with the temptation to eat a piece of candy. If they fail to resist it, they must move back two spaces on the board.

“The board game is two-fold: teaching children the importance of eating healthy and teaching children to eat sugar in moderation, because the spaces say if you eat a piece of candy, that’s okay, but then you have to move back a couple spaces,” Huprikar says. “It tests whether the children are willing to eat a piece of candy or whether they’d prefer to progress through the game without eating something sugary.”

The learning continues at the trivia spaces, where, upon landing, the player picks up a card containing information that’s food-, exercise- or health-related.

“They were actually eating during the game, which felt more real,” she says.

Huprikar also brought in M&M’s to represent the candy.

While doing research for FRUGGIE, Huprikar read a Chicago Tribune article by Dr. Linyuan Jing, of Geisinger Health System, about childhood obesity and then contacted her.

“She was one of my mentors, because she gave me feedback in designing the game and helped me figure out the duration of the study,” Huprikar says.

After Huprikar completed her paper, she submitted it to the JEI, hoping to experience the feeling of having authored a scientific paper. Both Luepke and Jing guided Huprikar through the steps of submitting the work to the journal.

“It was a long process, but I enjoyed it because I had several people reviewing my paper and I really wanted their feedback,” Huprikar says. “I think it helped me understand how to improve my paper and become a better researcher.”

The results revealed that the children had increased their enjoyment for fruits and vegetables.

“This indicated that the children no longer felt it was a chore to eat fruits and vegetables,” Huprikar says. “Many of the children decided that they didn’t want to eat the candy, because they didn’t want to move back in the game and possibly lose. They were so competitive at playing against their family members, and they found winning to be more important than consuming sugar.”

One of Huprikar’s goals is to provide FRUGGIE to area preschools—with the students getting to play the game during snack time. She’s also working on finding a place to sell the board game.

In addition, Huprikar built a wireless app for the iPhone and iPad. The app is a similar to FRUGGIE’s concept, centering on building a healthy food pyramid. She’s currently looking for 40 research participants (ages six to nine). She hopes to begin shortly after all of the participants are lined up.

“I found it rewarding that the board game did make a difference and had a positive impact on the eating habits of the children who participated in my study,” she says. 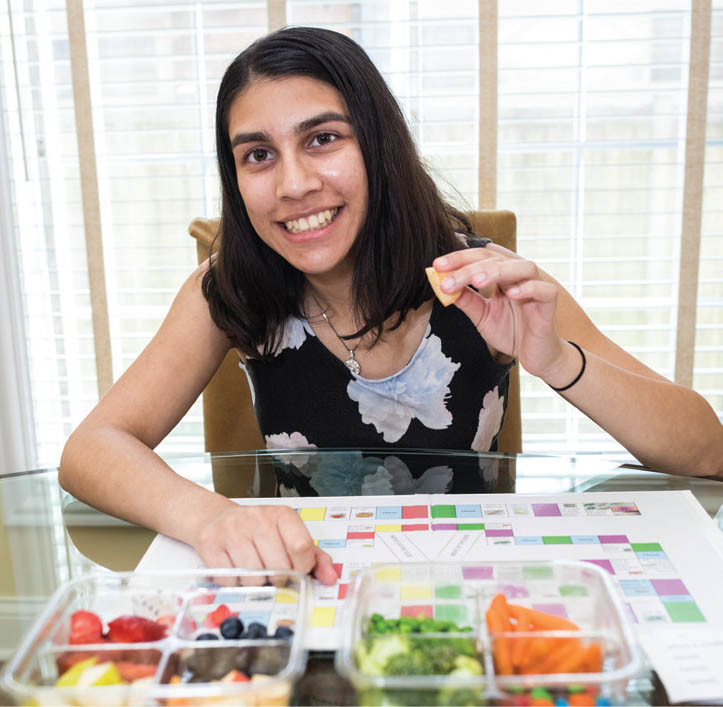