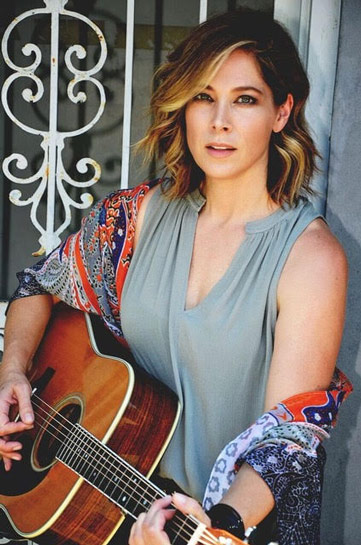 Even when she’s not touring or recording, storied singer/songwriter Alice Peacock is rarely idle. Besides the fact that she’s a full-time mom and consistently taking time to write new songs and follow her muse, she has no shortage of pet projects that spark her inspiration and allow her to give back in ways that she finds both satisfying and essential.

This year, Peacock returned, for the 11th summer, to mentor the kids who attend Camps Kooch-i-ching and Ogichi Daa Kwe. She teaches songwriting at the latter, and as a result, she has written hundreds of original camp songs with the campers. She feels a special bond with them, since many are from Chicago, a city she called home for years.

“It’s been an honor and a great joy to have been a driving force behind the culture of songwriting and music at Ogichi Daa Kwe Peacock claims. “We’ve written hundreds of songs together over the past eleven summers.  I’ve taken the girls into the studio and recorded two CDs of their original material. I look forward to watching these future songwriters emerge from this camp of Strong Spirited Women!”

Those thoughts also compelled Peacock to devote her time to another of her favorite causes, the non-profit organization she founded called Rock for Reading. Its purpose was to raise awareness and money for literacy groups in Chicago and to motivate and empower people to enrich their lives through reading. With support and partnerships from LaSalle Bank, Chicago Community Trust, Chicago Public Library, and Chicago Public Schools, Rock for Reading broadened its reach to promote literacy activism and involvement.

Peacock’s efforts to further social consciousness and share her skills don’t stop there either. She’s served as a trustee of the National Academy of Recording Arts and Sciences (the same group that oversees the GRAMMYS). In 2007 she testified before the Senate Judiciary Committee, along with Lyle Lovett on behalf of radio performance royalties for artists.

A widely praised artist and performer, Peacock has released six albums, scored a hit single called “Bliss,” which she recorded with John Mayer, and has had her songs featured in any number of high profile television shows and motion pictures — “Because of Winn Dixie,” “Men In Trees,” “The Ghost Whisperer,” “ What I Like About You,” “Dawson’s Creek” and “Smallville,” among them. She’s shared stages with such notables as John Mellencamp, Aimee Mann, Toad The Wet Sprocket and Heart, and made frequent appearances on radio and TV, including a well-regarded guest spot on “A Prairie Home Companion.”

In addition to her other pursuits, Peacock remains devoted to her first love, making music. She’s been writing new songs that will soon find their way to her next album. She’s currently working on a new record in Nashville with Grammy award winner Phil Madeira (Emmylou Harris, The Civil Wars, Buddy Miller, Wood Brothers). The album is slated for release next year.