Chicago boasts some of best museums in the world. Who hasn’t been awed during a visit to The Field Museum? Who hasn’t been struck by the beauty inside The Art Institute of Chicago? 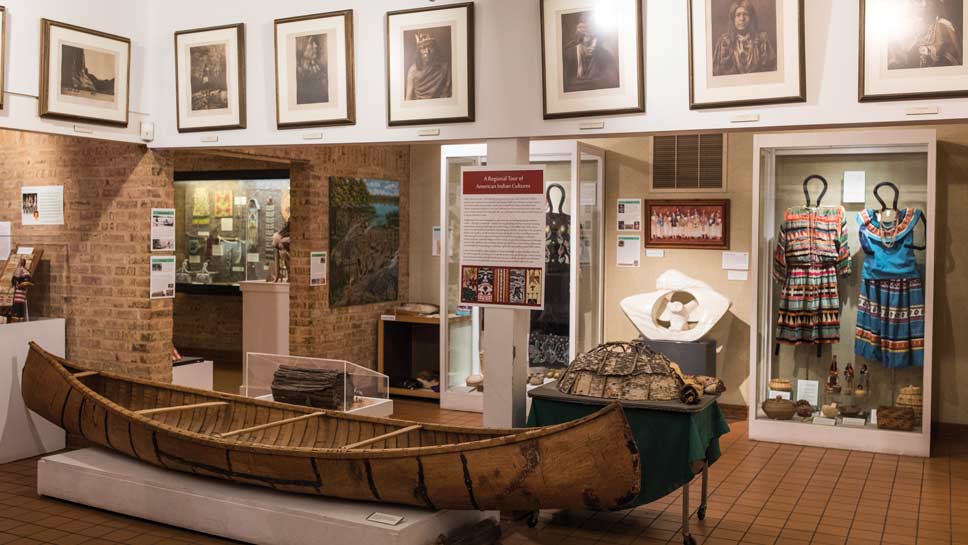 QUITE AN OAR-NAMENT: A birchbark fronts a section at Mitchell Museum of the American Indian in Evanston. PHOTOGRAPHY BY JOEL LERNER

But North Shore denizens don’t have to travel that far to get lost inside buildings filled with arresting relics and exceptional exhibits. From Evanston all the way to Lake Bluff, the North Shore is home to an ample number of small museums displaying nationally renowned collections.

Open six days a week, with tickets priced at $16 for adults and $10 for children aged 9-13, the Halim Museum offers a free, one-hour guided Highlights Tour of its stained glass and clock galleries.

A short distance away, the Mitchell Museum of the American Indian contains an extensive permanent exhibition of archeological, ethnographic and art objects of American Indian and Inuit people, with the bulk of the items coming from a large private collection donated by John and Elizabeth Seabury Mitchell. Founded in 1977, the museum’s displays include a replica wigwam, a large birchbark and a full-sized ciporoke lodge house on the museum’s grounds.

Mitchell is one of the few U.S. museums that focuses on the art, history and culture of Native American and First Nation peoples from the U.S. and Canada.

“It gives us the opportunity to compare and contrast and tell a significant story, one that helps dispel the myth of the Plains Indian as a universal figure,” said Mitchell’s executive director, Kathleen McDonald. “There’s huge diversity.”

With its roster of speaker events, library and research facility, Mitchell is a popular destination for academics, while also remaining accessible to visitors of all ages. Touch table displays encourage interactive exploration.

And with an entry fee of just $5 for adults and $3 for children and students, Mitchell—open every day except Monday—offers great value for museum-goers.

“Keeping our admission price low enables us to open our doors to the most people,” McDonald said.

Further north, inside a small, converted 1877 Gothic Revival home on Linden Street, the Winnetka Historical Society Museum and Research Center maintains one of Illinois’ largest costume collections, as well as a permanent exhibition of photographs, letters, journals and artifacts chronicling the history of Winnetka—from the Native American people who once populated the area through to present–day life.

The WHS’s archives include house files on every residence in Winnetka, as well as village newspapers dating back to 1903.

“We’ve had a number of Ph.D. candidates come through from Japan to research Carlton Washburne [superintendent of schools in Winnetka, from 1919-43] and progressive education,” WHS Director Tane Beecham said.

Free and open to drop-in visitors on Tuesdays and Thursdays from 1-4pm, the Museum’s current exhibition, Winnetka Goes To War: 1917- 1918, tells the stories of Winnetka’s soldiers and citizens living through WWI. 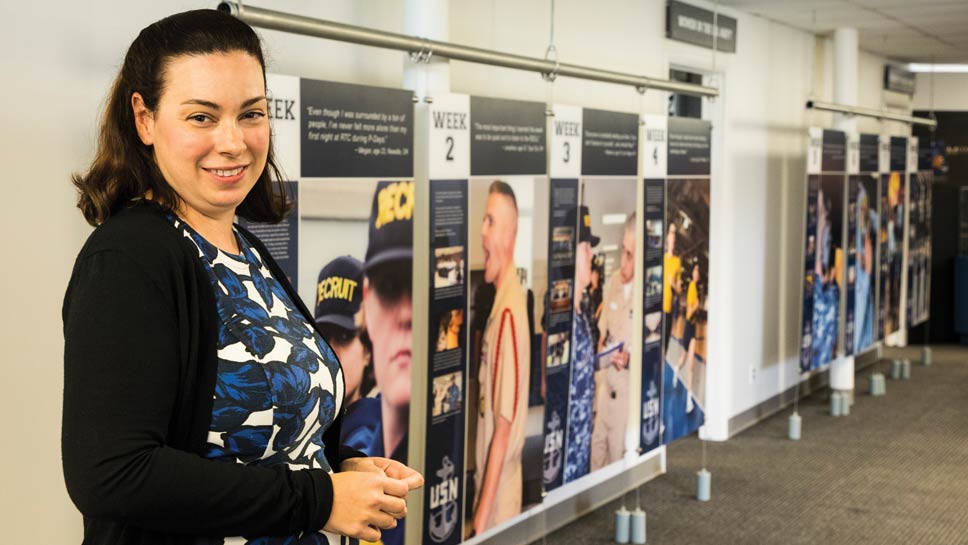 Dr. Jennifer Searcy, director of National Museum of the American Sailor, stands before a display at the museum.

Founded in 2009 inside the Naval Station Great Lakes—home to the United States Navy’s only Navy boot camp—NMAS was relocated in 2014 to “Building 42”, a former reception center for boot camp graduates and their families, located just outside the base. With the move, NMAS’s visitor numbers skyrocketed from 1,000 visitors per year to more than 50,000.

“Every sailor in the Navy came through this building,” said NMAS’s director, Dr. Jennifer Searcy. “For many parents, this is the last place they saw their son alive. The building itself is one of our most important artifacts.”

Free and open to the public six days a week, NMAS’s permanent exhibit includes displays related to the Navy’s boot camp, the history of women and diversity in the Navy, the history of Naval Station Great Lakes and its impact on the Navy as a whole.

“The Navy has always had museums to showcase its subs and airplanes, but there’s even a museum in Annapolis dedicated to naval officers,” said Searcy. “Up until recently we didn’t have a museum that [spotlighted] sailors.”