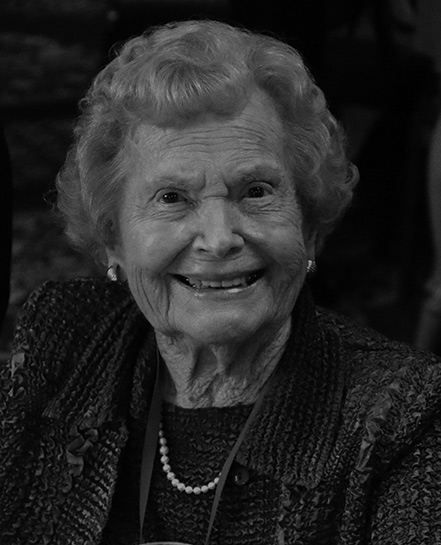 Ruth C. Nissen was 16 years old when she graduated from high school in Chicago.

She would spend the rest of her full life—80 more years, to be exact—embracing the joys of family, work, church, quilting, visits to flea markets, making savory Swedish meatballs and hosting large, house-stretching Thanksgiving dinners.

Ruth met her future husband, William G. Nissen Jr., when both worked for Allstate Insurance Company. They were married for 50 years until William’s death in 1996. They had three children: William, Robert and Mary.

Ruth worked in Chicago for the U.S. Navy as a civilian during World War II and later joined United Airlines as a flight attendant. The Nissen family moved to New Jersey, back to Chicago and then to Atlanta, before settling in Lake Forest for decades. Ruth found constant warmth at St. James Lutheran Church, Lake Forest, where she was a sewing group regular. Ruth also devoted time and energy to Leisure Time, a local group that organized events for senior citizens.

But family meant to the world to her. Be it an accomplishment or a school activity involving one of her grandchildren or great grandchildren, Ruth wanted to know about it or show up for it.

Ruth is survived by her children, five grandchildren and three great grandchildren. Interment was private. A memorial service will be held at a later date. Memorial donations may be made to the Dean Schraufnagel, M.D., Endowed Professorship Fund at University of Illinois Medical School, for the support of lung research (schraufnagelprofessorship.uic.edu), or to St. James Lutheran Church (1380 North Waukegan Road, Lake Forest, 60045).