FRIENDS AND FAMILY PAY TRIBUTE TO A NORTH SHORE BUSINESSMAN, CIVIC LEADER AND PHILANTHROPIST
John McGovern, a North Shore businessman who worked in the highest levels of politics and government, died Friday, July 13, from a suspected heart condition.
He was 48.
Known affectionately as “Johnny” to close friends and family, McGovern’s memory was honored at a recent funeral service at Church of the Holy Spirit in Lake Forest, and he was laid to rest privately.

He is survived by his beloved wife of seven years, Wentworth Caldwell McGovern, and their two young boys, Caldwell Armour McGovern (4) and Watson Greeley McGovern (2). He is also survived by his mother, Karen Osborne McGovern of Lake Forest, and his sister, Courtney Osborne McGovern of Chicago. In addition he is survived by his in-laws, long standing Nashville natives, Wentworth and Barry Caldwell, as well as three sisters-in-law: Ashley Caldwell Levi ( Joe), Barry Caldwell, Liza Caldwell Coleman (Greg) and numerous nieces and nephews. John is preceded in death by his father, John E. Mc-Govern, Jr. (“Jack”).

Born in Chicago, he attended Lake Forest Country Day School before boarding at Deerfield Academy in Deerfield, Mass. In 1991, John graduated with honors from Princeton University with a degree in American History and a Certificate from the American Studies Program. While at Princeton, John was a member of the Ivy Club as well as Sigma Alpha Epsilon fraternity. John would go on to to earn his J.D. from the Northwestern University Pritzker School of Law and was admitted to the Illinois Bar.

John worked at the highest levels of politics and government, serving as a top aide to the Speaker of the United States House of Representatives for over seven years. During his tenure, John worked as both an official and campaign press secretary, and assumed a variety of other roles overseeing communications programs, fundraising, and campaign strategy. John also ran a multimillion dollar national political action committee, Keep Our Majority PAC, where he served as executive director, leading integration of the Speaker’s national political strategy with the National Republican Congressional Committee and GOP congressional candidates across the country.

He also held leadership roles in a number of key federal campaigns, including serving as Campaign Manager for U.S. Rep. Mark Kirk’s first campaign in Illinois’ 10th District in 2000 as well as Communications Director for U.S. Senator Peter Fitzgerald’s 1998 race in Illinois. Prior to campaign work, John served as Press Secretary for the Illinois Republican Party from 1994-98. In 1999, the Chicago Sun-Times recognized John as one of “30 Under 30” leading professionals in the Chicago area for his success in politics and public affairs.

John continued to be involved with policy and politics at the state and federal levels, serving as a senior advisor to U.S. Rep. Bob Dold during his 2010 and 2012 campaigns and to Andy McKenna, a former chairman of the Illinois Republican Party and candidate for Governor. In 2008, John organized and directed all planning, programming, and fundraising for the Illinois Delegation to the Republican National Convention in Minneapolis- St. Paul; he attended every Republican convention since 1996. As a respected voice in the political debate, John was a frequent commentator on television and radio outlets in the Chicago market, and was quoted widely in national and local publications across the country.

Outside of his professional career, John was a leader in a number of business, civic and charitable organizations. He served on the Corporate Board of Directors of the Boys & Girls Clubs of Chicago and held the position of Vice President of the Auxiliary Board of the Art Institute of Chicago at the time of his death. In addition, John was a devoted member of the Elawa Farm Foundation Board and was the great-grandson of A. Watson and Elsa Armour, who had originally founded and owned Elawa Farm. John previously served as a longtime member of the Illinois Government Affairs Group, on the Board of the Rush Medical Center Associates and on President’s Leadership Council at the Field Museum. From 2009-2011, John was a Fellow in the Emerging Leaders Program of the Chicago Council on Global Affairs.

“The Forest Park Project in Lake Forest was privileged to have John be our PR consultant,” says Lake Forest resident Joan DePree. “He was brilliant, funny and always a gentleman. John was also a close personal friend to my family. His loss is a heartbreaker.”

A true Chicagoan, McGovern loved the city as evidenced by his support of the arts, culture and community in Chicago as well as his passionate support for Chicago sports teams—especially the Cubs and Blackhawks. John could be found on the third-base line cheering on his team and flagging down the beer man. His son Caldwell attended his first game with his father this past spring. John also loved to be outdoors— hunting and fishing—just as his father had taught him at the family cabin in northern Wisconsin. He was an avid reader, devouring historical biographies; a weekend golfer who enjoyed the tradition of the game and the camaraderie of his playing partners; and a fierce bridge player.

But according to family members, his greatest rewards were his roles as a devoted husband to his wife Wentworth and as a father to their sons Caldwell and Watson. Based on the outpouring at his recent memorial service, he is a man who will be missed by many whose legacy will endure for generations. 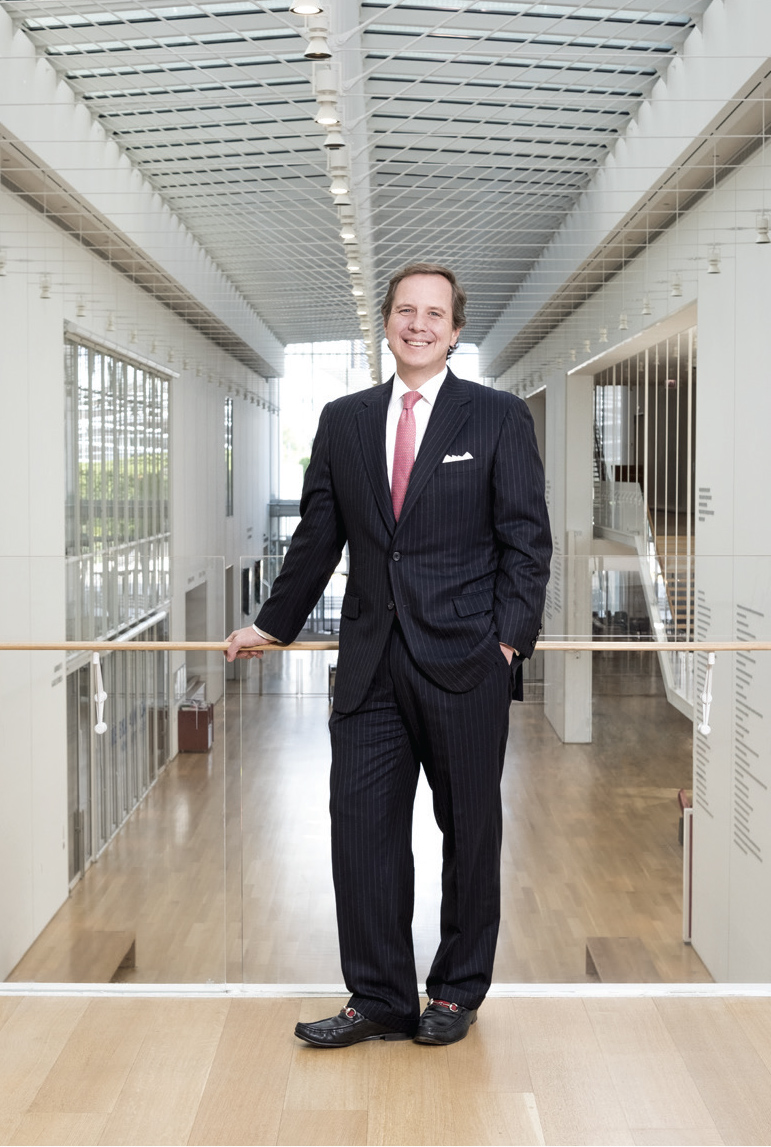 John McGovern at The Art Institute of Chicago last year.