The Italian market/butcher-shop, located near Core Power Yoga and The Glenview Grind, is the latest commercial enterprise to set up shop on the street level of Glenview Road’s luxury apartment building, Midtown Square.

With its sleek, industrial-style build out, subway-tiled walls and dramatic ceiling heights, Forza Meats represents a new generation of butcher shops, a place where customers might grab a grilled panini or submarine sandwich during their lunch hour, or sit at a counter to linger over a cold drink and a fresh Ceasar salad. Forza’s 20-foot butcher counter, stocked with traditional cuts of pork, beef, lamb and chicken, shares the limelight with a refrigerator full of ready-made meals-to-go, including Meat Lasagna, Porchetta-style Pork Loin, bake-at-home pizzas and a selection of house-made “MaMa Minelli” pasta sauces. 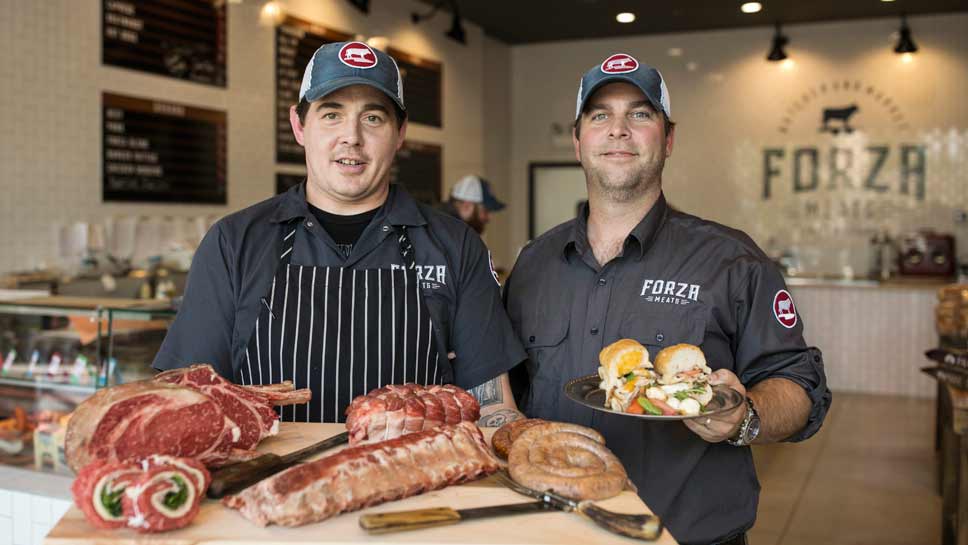 Forza Meats is the brainchild of third-generation butcher Mario Minelli and his business-partner, Tyler Pontarelli. Born and bred in Glenview, the co-owners have been friends since they played T-ball together some 30 years ago.

Minelli’s grandparents, who emigrated from Italy in the 1920s, owned a butcher shop in downtown Chicago before opening Minelli Brothers on Milwaukee Avenue in Niles in 1970, where Mario continues to work with members of his extended family.

Five years ago, Minelli struck out on his own, opening the restaurant Chop Shop in Wicker Park. When Pontarelli approached him last year about opening a business in their hometown of Glenview, Minelli said it was an “easy sell.”

“Tyler found the location and I said, ‘I’m in,’” recounted Minelli. “It’s a partnership built on the strength of our friendship. We’ve known each other since we were 5 years old.” 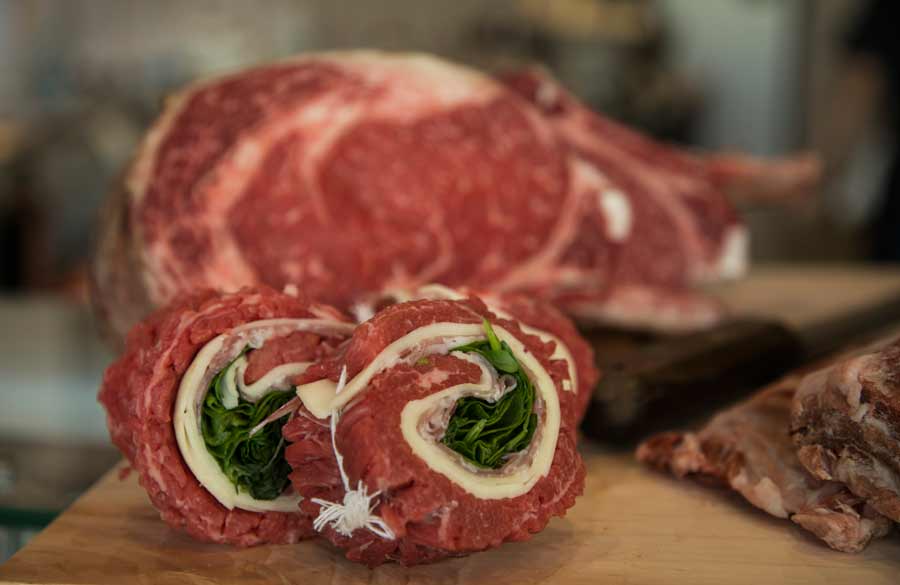 Many cuts of meat are available at Forza Meats in Glenview. PHOTOGRAPHY BY JOEL LERNER/JWC MEDIA 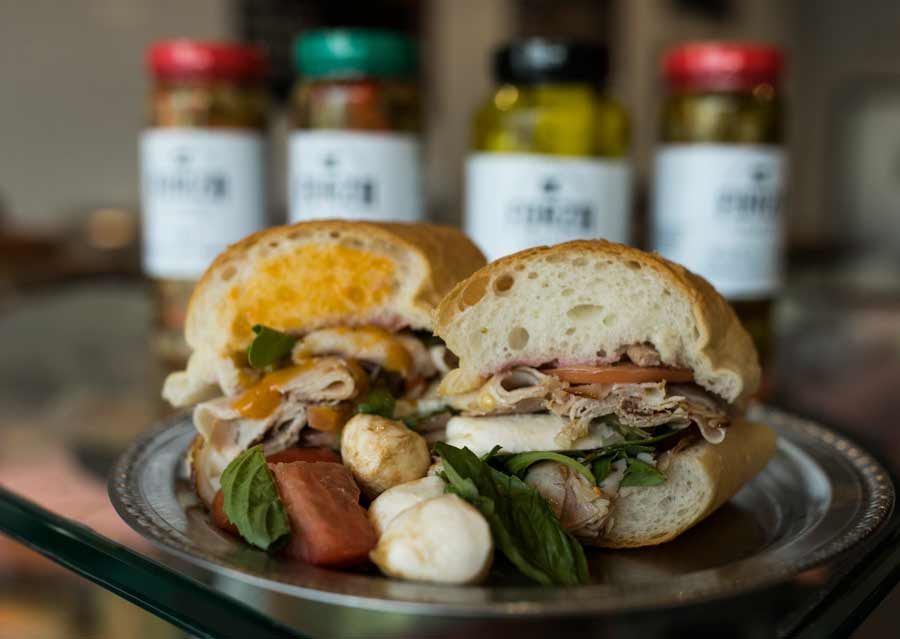 Minelli and Pontarelli brought in Jimmy “The Butcher” Shay – a well-known figure in the Chicago food scene – to run Forza’s meat counter, officially opening their doors on June 27, just in time for the summer grill rush.

“Our busiest times are 4th of July and Christmas,” said Minelli. “In that order.”

Dressed in crisp grey shirts, pinstripe aprons, and branded baseball caps, knowledgeable employees serve up Forza’s broad menu of sandwiches priced between $7 and $13 for a whole, including The Menza Menz, a thick stack of corned beef pastrami and provolone topped with lettuce, tomato, pickles and caraway mustard.

Vegetarians may like The Giardino, a cold sandwich made with muffaletta – a spicy Italian olive salad – and layered with roasted red peppers, artichokes, and arugula, topped with fresh mozzarella. On the hot side, Forza offers the Four Meatball Sub, featuring the late Grandma Minelli’s famous meatball recipe.

“My grandmother literally rolled meatballs until she was 99 years old,” said Minelli.

Salads with clever, self-explanatory names range in price from $11 to $12, including The Butcher’s Chopped, We Got The Beet, and Forza’s house Caesar, The Brutus.

Forza’s meat is all sourced from Slagel Family Farm in Fairbury, Illinois, fifth-generation farmers who pride themselves on farm-raised, hormone free products.

“Farm-to-table is as big as it’s ever been,” said Minelli. “But this is not a high-end specialty shop. Forza is priced to be an everyday, neighborhood butcher.”

“Our soft opening actually felt like a grand opening because of the response, “ said Minelli. “Glenview is looking for this. People like to have the thing they call their own…their favorite baker, barber or butcher in their hometown.”