Humans who routinely bring their dogs on joyrides to the grocery store or dry cleaners should leave their canine besties safely at home when the temperature rises above 70F.

Hot cars can be deadly for dogs. Experts have calculated that a 75F day can translate into a temperature of 118F inside a car – even with the windows cracked. A pleasant 81F day can mean car temperatures rise as high as 138F inside a parked car.

“Heat builds up quickly in a car,” said Dr. David Cohen, chief veterinarian at Glenview Animal Hospital. “Temperatures can climb as high as 140F in a parked car on a hot summer day. That’s enough to kill a dog of heat prostration in five minutes.” 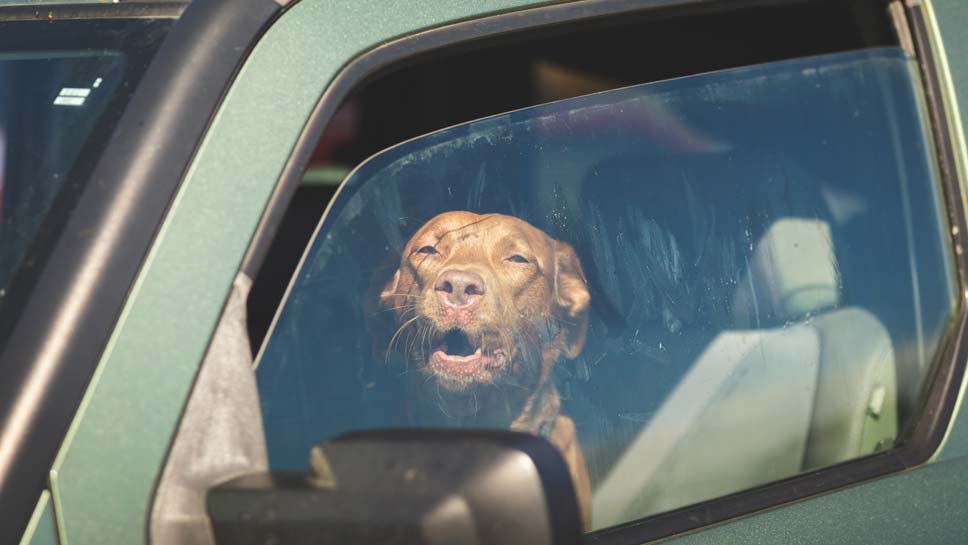 “Hot-car” laws protecting pets are becoming increasingly common across the United States. Twenty-six states – including Illinois – now have hot-car laws on the books that broadly prohibit confining animals in any manner that endangers their safety.

Illinois is among 20 states with hot-car laws that permit public officials such as police officers or humane officers to break into a vehicle to rescue an endangered animal.

Sergeant Jim Foley, a public information officer with the Glenview Police Department, said there are usually between five to 10 “hot-car” incidents in the Village of Glenview each summer. After arriving on the scene, police use lockout tools to gain access to cars, provide water to the animal, and try to make contact with the pet’s owner.

“It’s generally happens in cars parked outside a store, and we’ll typically go inside and attempt to locate the dog owner, said Sgt. Foley. “I cannot remember a case where a citizen broke a window.”

11 states, including Wisconsin, Indiana and Ohio, have “Good Samaritan” hot-car laws, meaning private citizens who take matters into their own hands and break a window or car door to free an endangered animal are immune from civil or criminal liability.

In Indiana, a modified Good Samaritan law stipulates that private citizens rescuing dogs from hot cars are liable for one-half of the cost of repairing any damage caused by forcible entry, but are immune from further liability.

A law in Wisconsin prevents Good Samaritans from being sued for breaking into a vehicle to rescue a pet, but only if police are contacted before the break-in to make sure the pet is really in danger.

But breaking the window of a car to rescue a pet can potentially backfire.

“We strongly discourage people from taking matters into their own hands,” said Winnetka Chief of Police Marc Hornstein. “Using a blunt instrument to break a window could actually wind up injuring the pet.”

Hornstein and his colleagues at the Winnetka Police Department take proactive steps each summer through to educate dog owners through newsletters and social media about the dangers of rapidly rising temperatures in parked cars, and to offer solutions to owners who enjoy bringing their dogs on car rides.

“First and foremost, we tell dog owners to leave their pets at home on hot days,” said Winnetka Police Department’s Public Safety Analyst, Kerry Kaup. “But if you need to run an errand with your pet, bring along a friend who can stay in the air conditioned car with your dog. Alternatively, use a drive-through or bring your dog inside.”

Police-issued warnings and safety guidelines appear to have paid off. Dr. Cohen of the Glenview Animal Hospital reports that emergencies involving overheated dogs are rare in his clinic.

“The North Shore is a relatively educated demographic and the vast majority of dog owners know not to leave their dog in a hot car,” said Cohen. “In my 37 years of practice I’ve only seen a handful of dogs with heat prostration.”