When Carole Dibo, founder of Actors Training Center (ATC) in Wilmette, first heard that her client Rachel Brosnahan was auditioning for the role of a 1950s stand-up comedienne in the Amazon series The Marvelous Mrs. Maisel, she was more than surprised.

Though ATC offers comedy workshops, Brosnahan had no comedy experience.

Dibo told DailyNorthShore, “I literally called Rachel and said this is pretty funny, because you’re not that funny.”

Dibo explained that when Brosnahan first auditioned she was sick with the flu, but that didn’t stop her from attaining the role of a lifetime.

“Rachel’s a relentless investigator and she watched all of the old comediennes like Fanny Brice,” said Dibo. “Whatever she doesn’t know, she will learn — and she’s funny now. I don’t think there’s anything that woman can’t do.”

Earlier this year, the 27-year-old, who grew up in Highland Park, won a Golden Globe for Best Performance by an Actress in a Television Series – Musical or Comedy, as well as a Critic’s Choice Award for Best Actress in a Comedy Series.

Dibo was honored when Brosnahan thanked her during both acceptance speeches.

Although the release date for the second season of The Marvelous Mrs. Maisel has not been announced, Dibo said the series was just picked up for a third season.  This decision led Dibo and Brosnahan to part ways as manager and client after working together more than 10 years, enabling Dibo to devote more time to developing other talents.

Dibo described how Brosnahan made a lasting first impression at 16.

“There’s something about kids that just have it, and there’s a maturity, commitment and seriousness about them,” said Dibo. “There’s a hunger and it translates into talent once you can harness it and really train them how to take that into their work. They have a depth of understanding that is just undeniable and Rachel has that.”

Dibo explained that Brosnahan first took a summer class at her studio in the city the summer before her junior year at Highland Park High School. The following year, Brosnahan took workshops and classes at the ATC and Dibo coached her on college monologues before she was accepted to the New York University Tisch School of the Arts.

“I still work with students who are getting ready for college quite often and everybody keeps getting into the schools that they’re looking for,” said Dibo. “The coaching with me or any one of my staff is imperative.”

Though Dibo found an agent for Brosnahan while she was studying at NYU, a New York casting director suggested that she meet another agent. Dibo called the agent saying that she was Brosnahan’s manager (realizing she never uttered those words before) and he signed her after their interview. That’s when Dibo officially became Brosnahan’s manager.

“She’ll say that I’m the one who taught her it was okay to pass on projects that did not fit who Rachel was as a feminist, and as a liberal. I read scripts for her following that criteria,” said Dibo.

While Brosnahan was still in college, she was auditioning and booking projects. To prevent her from being penalized, Dibo met with Brosnahan’s dad to count her missing hours from class.

She appeared in movies and TV shows, but her first big break was landing the role of prostitute Rachel Posner in the Netflix series House of Cards before she graduated from college.

Dibo thought she was too young to play this character, but the talented Brosnahan turned a part that was initially written for two episodes into a recurring role that lasted three seasons.

Remarkably, Brosnahan graduated in four years from NYU Tisch School of the Arts in 2012. Unfortunately, she missed graduation, because she was shooting the film Beautiful Creatures.

“Rachel has an amazing capacity to be able to do a lot of things at once, do them well and be committed, which you have to be in this profession,” said Dibo.

DailyNorthShore: What do you tell students who want to follow in Brosnahan’s footsteps?

“ I tell them that it takes 150 percent commitment and you have to be laser focused,” said Dibo. “You can’t really teach somebody that. You have to love the work and have a strong work ethic.”

She recommends that 7th to 12th grade students start with the ATC class The Power of  ‘If’’ to “access their imagination, learn how to respect other actors and their space, and tap into their creative self.”

There is also a a two-week summer program for 9th to 12th graders that first attracted Brosnahan at 16. The program includes Physical Theater, voice and dialect, and Shakespeare from 9 a.m. to 4 p.m. Head shots will be taken and the students perform in a showcase for casting directors and agents in the city.

“These kids stay together for a lifetime, having watched each other bare their souls and it warms my heart,” said Dibo.

Dibo worked as an actress for several years and has what she expects all of her ATC teachers to have – “experience on the frontline,” so they understand what it takes to get the job.

There’s still time to register for workshops taught by casting directors beginning July 14 and a Musical Theatre workshop for 4th to 8th graders on August 18.

“ATC is a safe place to celebrate who you are,” said Dibo. “Even if students don’t become actors it’s very freeing and it sends a lot of awesome human beings out on the street.”

Dibo is grateful that Brosnahan recently took time out of her busy schedule to do a PSA for the ATC scholarship fundraiser.

“Our relationship is lovely and I’m excited that Rachel’s received the level of success that she deserves,” said Dibo. 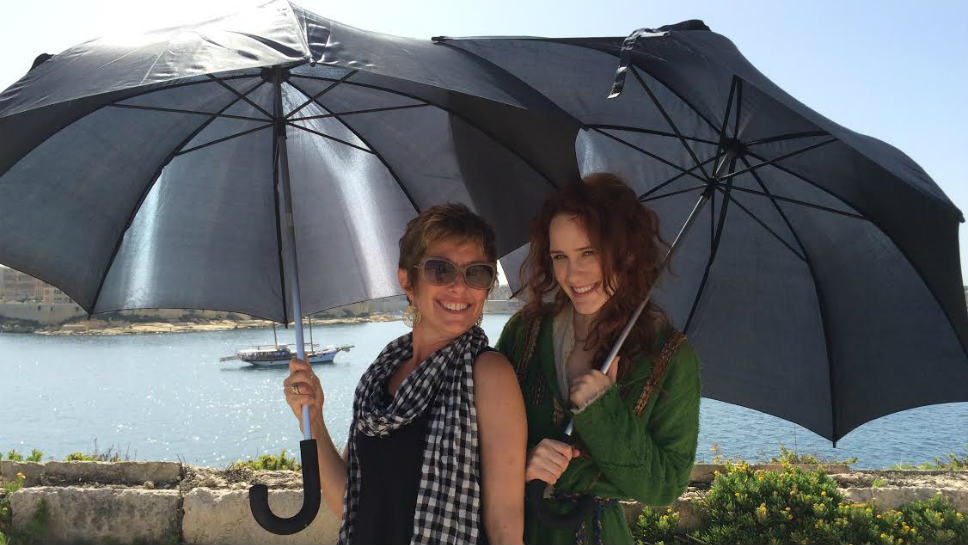 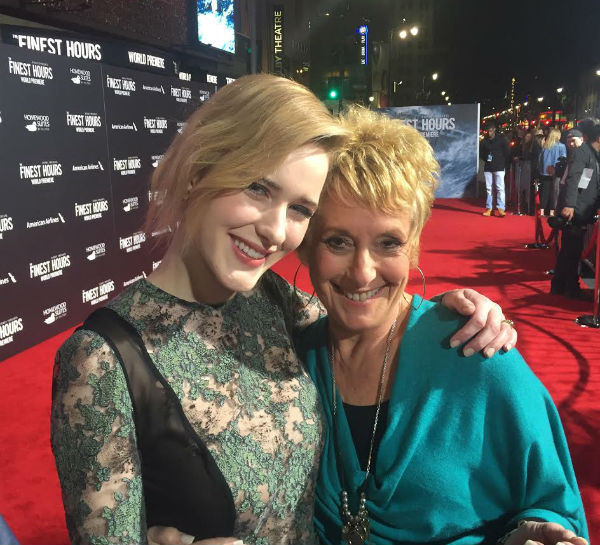 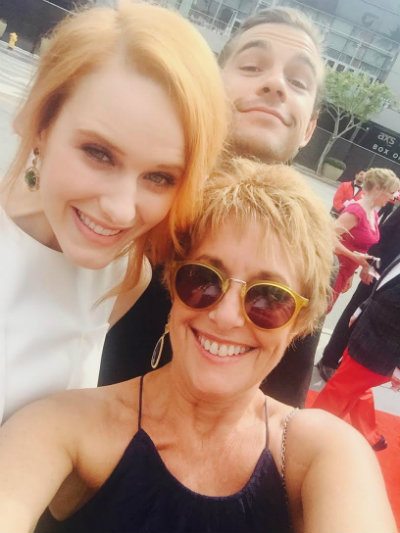 Carole Dibo taking a selfie with Rachel Brosnahan & partner Jason Ralph at the 2015 Emmy Awards. Brosnahan was nominated for Outstanding Guest Actress in a Drama Series for “House of Cards”