Fresh off his victory in the United States Supreme Court in the Janus case, Governor Bruce Rauner addressed a gathered crowd of over 130 at the Gorton Center in Lake Forest June 28th.

He discussed the Supreme Court’s ruling in favor of government workers’ First Amendment rights to refrain from supporting political speech with which they disagree, his efforts to grow the Illinois economy, cut taxes and support Republican down-ticket races in the crucial effort to unseat Democrat House Speaker Mike Madigan and thus reduce a cycle of corruption in Illinois. He answered questions from the floor on diverse topics and stated his differences with other Republicans with candor and clarity. Those differences, he stated, would not stop him from supporting down-ticket Republican candidates.

Rauner praised Lake County GOP Chairman and Illinois Republican Party Co-Chairman Mark Shaw for his success building the party locally and his efforts statewide. Rauner also pledged his continued support for other Republican candidates, underscoring party unity and urging those gathered to avoid Mike Madigan’s calculated efforts to divide Republicans by tightly controlling the timing and content of bills he allows to reach the Governor’s desk. “For Madigan, it’s all politics,” said Rauner, decrying the Democrat Speaker’s disregard for good faith negotiation, compromise or good public policy, to the grave detriment of Illinois workers and taxpayers.

Finally, he underscored the importance of the remap of legislative districts attendant with the 2020 Census, noting if Democrats controlled the remap by winning the 2018 Governor’s race and the legislature, they would control the drawing of new legislative districts, ensuring that their failed policies would dominate the state until the next remap.

Event attendees from Lake County and Chicago emerged from the meeting, energized for an Illinois “red wave.” 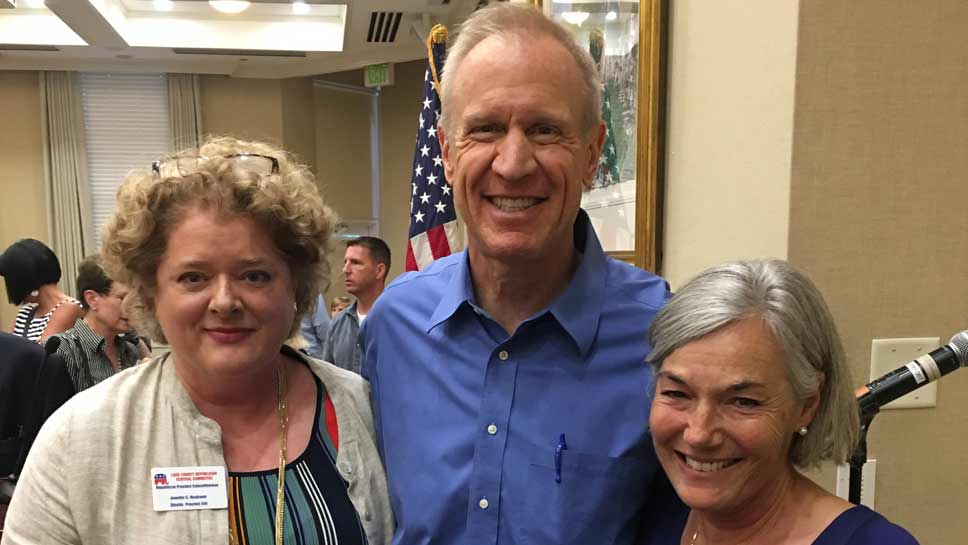 Submitted by the Women’s Republican Club of Lake Forest-Lake Bluff was founded in 1941 and is the longest continually operating political organization of its kind in the area. The WRC exists to assist local, state and national Republican candidates win elective office; to assist elected Republican officeholders with constituent interface and to educate all voters on issues important to the maintenance of our Constitutional republic and the social and economic vitality of Illinois and our local communities. All men and women, wherever they reside, are welcome to join WRC and their yearly dues help sustain WRC efforts.