Ace storyteller Rochelle Distelheim has a doozy of a story to tell, and she shares it with her first-time breakfast mate at a booth in a quiet corner at Country Kitchen in Highland Park.

A woman meets a man, a Chicago dermatologist, decades ago at a summer event in Wisconsin and later makes an appointment to see him at his office on Michigan Avenue. Not because she has an ailment that needs immediate attention, unless you think smitten is a condition that needs to be examined immediately.

The woman gets all dressed up for the appointment. She has to convince herself that she has some skin condition before entering the dermatologist’s office. Something. Anything. She comes up with something — a made-up ailment. Splotches. Yes, splotches on her arms. That’s what she’ll tell the doctor she thinks she has. Everyone gets splotches in the summertime, right?

Distelheim continues with her story. The dermatologist later asks the woman out for drinks. They both get dressed up for the date. They clink-clink glasses in the basement of the Palmer House in Chicago, fall in love, get married in California nearly two years later and stay married for 66 years. End of delightful story.

But I’m here at Country Kitchen to hear all about another romantic narrative, about Distelheim’s debut novel, Sadie in Love (Copyright 2018, Aubade Publishing, 222 pages). What I love? That Distelheim, a Highland Park resident since 1956 and a mother of two lawyers (Ellen and Laura) and a journalist (Lisa), is a first-time novelist at the age of … 90. You don’t look 90! She hears that often, way too often. Her quick, spunky, sassy response: “What is 90 supposed to look like? I’ve worn the same face all my life!” 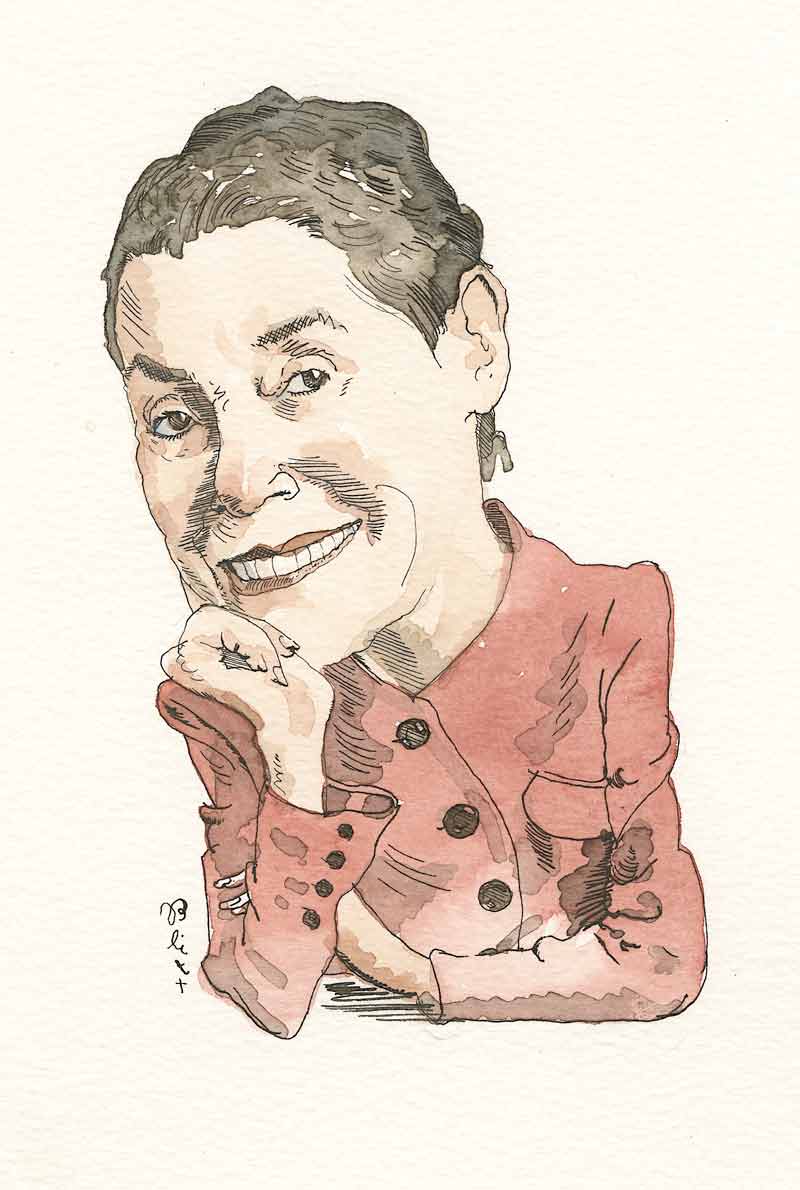 Sadie in Love is a romantic comedy set in 1913 in New York City’s Lower East Side. A widow and a Jewish immigrant, 40-something Sadie Schuster sells love knots, each made from a schmattah (a small piece of fabric), and melts at the sight of a muscular ice peddler and poetry devotee named Herschl Diamond.

Well into the book, Sadie attends a wedding. Herschl had been hired to work it, hauler of 100 pounds of ice to be placed in the icebox in the banquet hall kitchen. Herschl had also received an invitation to the wedding. Sadie enters a room full of guests and hopes to spot one strapping man, her eyes darting here and there. Back to here. Back to there.

Scanning the crowd, [Sadie] searched for that one sweet face she needed to calm her jangled-up nerves. Nothing. No Herschl seated up front, no sign of him in the aisles or — standing on tiptoes — at the back of the hall. He had come, maybe, but he had definitely gone.

You, the reader, are in the room with Sadie. Distelheim’s words, her poetry-laced prose, put you there. You see Sadie’s urgency, Sadie’s growing dismay. You feel for her. And you stand on your tiptoes with her. You root for Sadie’s face to soften, to transform from clenched to euphoric upon the discovery of her Herschl.

“Writing comforted me at an early age,” Distelheim, a graduate of John Marshall High School in Chicago, says after ordering a two-egg omelet with broccoli and spinach, a plate of cucumbers and whole wheat toast. “I wrote in notebooks in my youth, constantly wrote, filling the pages with my impressions of people and describing how I’d like to resolve a situation I was facing or at least handle it, deal with it. Writing was my companion. It still is. I wrote opinions, opinion pieces, for the student newspaper in high school. I pointed things out to our readers with my opinions.

“I also wrote a lot, mainly short stories, while my daughters took naps.”

The monthly women’s magazine McCall’s was the first periodical to publish a Distelheim short story. Its title: “Home Movies.” It moved a reader — an editor of another publication, specifically — to contact Distelheim and assign her to craft a feature about a local female surgeon.

“A female surgeon back then … that was radical,” recalls Distelheim, who also wrote an extensive magazine profile on Gloria Steinem after traveling with the writer/lecturer/political activist/feminist organizer. “I was told to spend time with the surgeon in her office and in the hospital and humanize this professional woman in her mid-30s, this virtual pioneer in the field of medicine. She let me follow her around for a week, a whole week. Can you believe that? I even watched her operate on a three-year-old boy with a kidney ailment. Will never forget it. Never.

“What an experience that was for me.”

Pieces authored by the award-winning Distelheim, a past president of an Illinois chapter of the National Organization for Women (NOW), appeared in The North American Review, Ascent, Story Quarterly, Good Housekeeping, Working Woman and Ladies Home Journal, among many others. She earned a Katherine Anne Porter Prize (short fiction), and her short story “More Cousin’s Club than Country” won the 2017 Gival Press Award. Fellowships? The Northwestern University Medill School of Journalism graduate has received heaps of them, including more than one from Lake Forest-based Ragdale Foundation.

On the Acknowledgements page of her first novel, Distelheim thanked her fellow Writers of Glencoe for listening to her development of Sadie in print countless times and “helping me make her more alive each time.” She dedicated Sadie in Love to her late husband, Irv Distelheim, her beshert (Yiddish for “meant to be, fated,” usually used romantically).

Irving H. Distelheim, M.D. died in January at the age of 99.

You remember Irv. Irv was the man who worked in the heart of Chicago, on the Magnificent Mile, as a … dermatologist.

“He believed in my writing since our first date,” a wide-eyed, splotch-free Rochelle Distelheim, her head tilted slightly to the right, says.

Rochelle Distelheim will discuss her debut novel, Sadie in Love, and sign copies of it at The Book Stall on August 12, beginning at 2 p.m. The Book Stall is located at 811 Elm Street, Winnetka.