Loyola Academy dedicated its soon-to-be constructed aquatic center to the memory of former swimming, diving and water polo team member John D. Norcross, Class of ’54, to honor his love of Loyola aquatics and his extraordinary legacy as the largest benefactor in the history of Loyola Academy.

John Norcross loved the water — and he loved Loyola aquatics. This Rambler athlete, who competed on Loyola’s swimming, diving and water polo teams, went on to play water polo for Stanford University, where he majored in economics before attending Northwestern University’s School of Law.

But, for John, Loyola aquatics was where it all began: the commitment to excellence, the self-discipline, the team spirit and the thrill of competition as he pushed his body and mind to their limits—skills and values that would serve him well throughout his life and in his successful career at Crane and Norcross, the Chicago property tax law firm that he founded with fellow Rambler Michael E. Crane ’54.

Over the years, John returned to Loyola frequently to celebrate our Rambler athletes and support our Jesuit educational mission. He generously supported the development of our Munz Campus in Glenview to give Ramblers in field sports the playing surfaces that they needed to excel, gave to the Robert P. Perkaus III ’77 Memorial Scholarship Endowment to open doors to a Loyola education for students from families of all income levels and contributed regularly to our Annual Giving Program.

John was also one of the first benefactors to invest in our Aquatic Initiative in 2008. After he passed away in November 2014, Loyola received word that this loyal alumnus had engaged in a final act of generosity by leaving a multimillion-dollar estate gift to Loyola Academy in his will.

“Throughout his life, John consistently answered the call of St. Ignatius to manifest his love ‘more by deeds than by words,’” reflects Loyola Academy President Rev. Patrick E. McGrath, SJ. “We are humbled by the trust that he has placed in us with this exceptional gift, which will enable us to build on the centuries-old tradition of Jesuit education and reimagine our mission for the 21st century. To honor John’s love of Loyola aquatics and his passion for the performing arts, his gift will be used to help fund our Pool and Theater Initiatives.”

When Loyola’s new John D. Norcross ’54 Aquatic Center opens in Fall 2019, it will enhance the aquatic experience of every Rambler—from the nonswimmer in need of basic water safety and swimming instruction to the varsity swim team member—as well as future Ramblers and other young people participating in Loyola Academy summer youth camp activities.

The aquatic center will house an eight-lane, Stretch 25, “fast pool” with wide lanes, flush-to-the-deck gutters and two one-meter springboards, as well as a movable bulkhead, which will allow simultaneous swimming and diving practices and faster transitions between swimming and diving events during competitive meets. The moveable bulkhead will also enable Loyola to host water polo games and championship swim meets in faster all-deep water and allow swimmers to warm up and cool down in the diving area before and after their events. Wide deck areas around the pool will make competitive events more efficient and comfortable for aquatic athletes and officials, as well as Ramblers and community members participating in instructional and recreational programs.

The new pool will be housed in a light-filled, two-story natatorium with separate team and physical education locker areas, a coaches’ office, a wet classroom adjacent to the pool area and advanced mechanical systems designed to ensure optimal indoor air quality. A 294-seat spectator gallery with retractable bleachers will enable Loyola swimming and diving coaches and physical education teachers to repurpose the gallery level as a dry classroom between swimming and diving meets.

Next to the John D. Norcross ’54 Aquatic Center, Loyola is building a “piazza” that will serve as a hub for Rambler life and set the stage for a renaissance in arts programming, which will culminate in the construction of a new theater for the performing arts slated to be built in 2022 during Loyola’s second phase of construction.

Inspired by the St. Ignatius Piazza in front of the Church of St. Ignatius in Rome—a place where ideas, the arts and the Church’s faith traditions have all flourished in community since 1728—Loyola’s piazza will be a welcoming place where students and members of the larger Loyola community can come together to converse, collaborate, create and celebrate their faith.

Conceived as a flexible, light-filled space that will connect the new aquatic center to our West Gym, athletic lobby, interior courtyard and academic wings, the piazza will be equipped with furnishings that can be rearranged to accommodate a variety of needs.

“When our new piazza is completed in Fall 2019, it will be a welcoming place that will serve not only as a place where people will cross paths on their way to other parts of the school, but as a destination where students can meet to participate in after-school study sessions, collaborate with their fellow Ramblers on class projects, or simply enjoy an impromptu conversation with friends,” explains Executive Vice President Dennis R. Stonequist ’90. “Although this new space will not be lavish in terms of finishes or furnishings, it will be a rich experience. The piazza will serve the entire Loyola community—with students, families, alumni and friends gathering there before and after school events or to celebrate the arts and cultural happenings such as musical and theatrical performances, art exhibits, poetry readings, open-mic sessions and more.”

As the new aquatic center and piazza make their transition from vision to reality, Loyola is also rerouting its drop-off and pickup lanes to improve traffic flow and reduce congestion on neighborhood side streets, installing new stormwater detention systems and directional signage and expanding its on-campus parking. These site improvements are slated to be ready by the start of the school year this coming August. 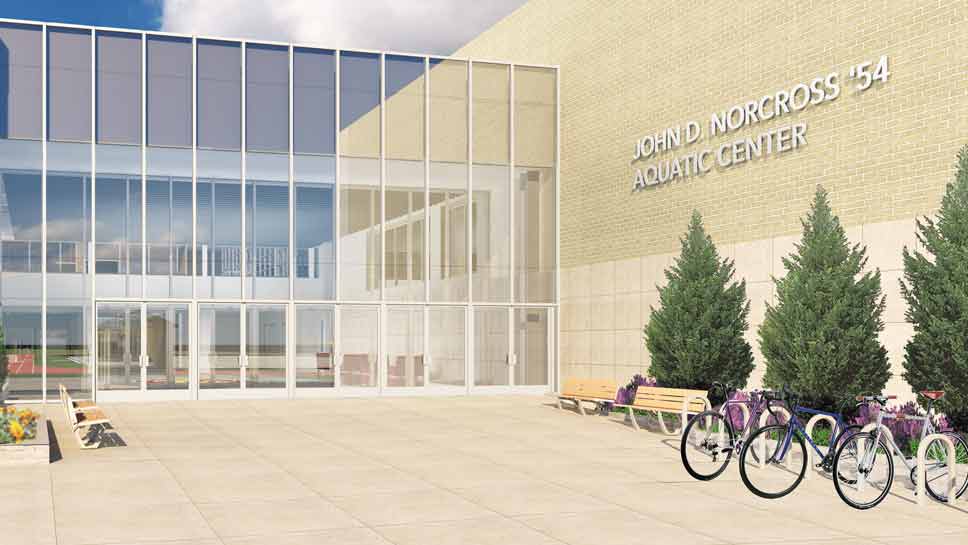 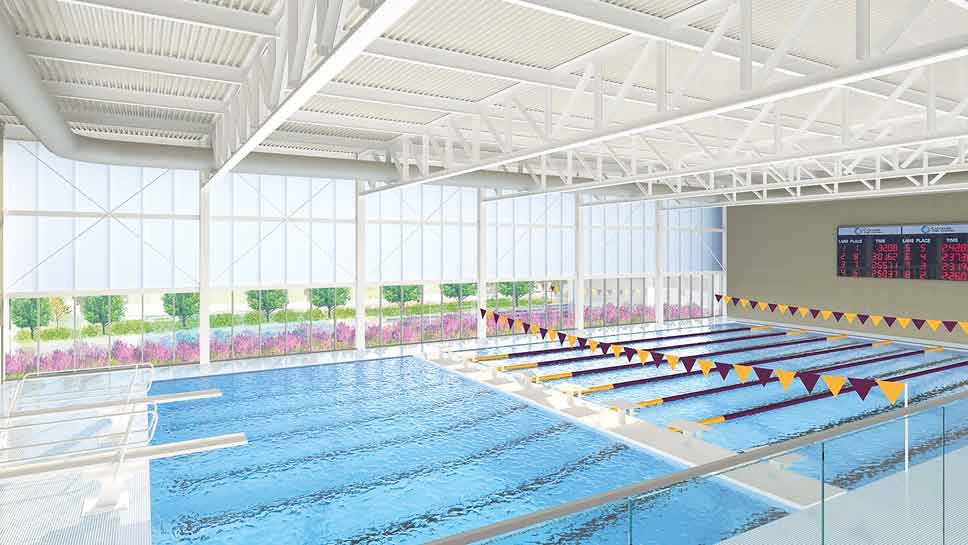 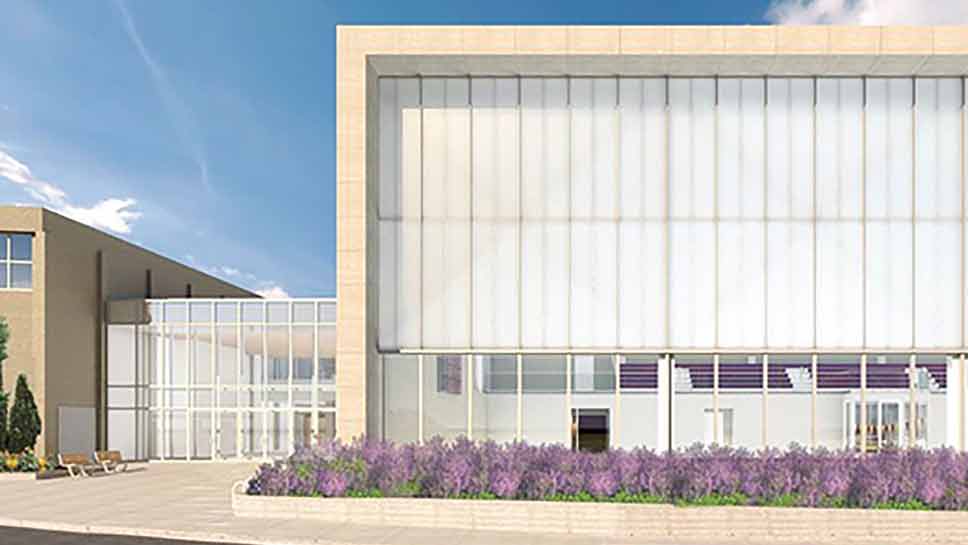