Owen Schuler has very blue eyes and such a direct, clear gaze, it’s tempting to imagine he can see right through the bright orange deck of SLAM playing cards I am holding—and possibly figure out any strategy I may have, while at it.

But while clairvoyance isn’t a real-life Owen Schuler skill, the ability to invent cool games is. Schuler, a 14-year-old 8th grader at Deerpath Middle School in Lake Forest, is the visionary behind SLAM—a card game of risk and strategy he made up, designed the packaging for, and worked with a game company to create.

Sold through two Lake Forest venues now, with plans for wider distribution, SLAM is one of many games Owen has dreamed up and the first under his Zap Cat Games moniker, that he’s brought to market. 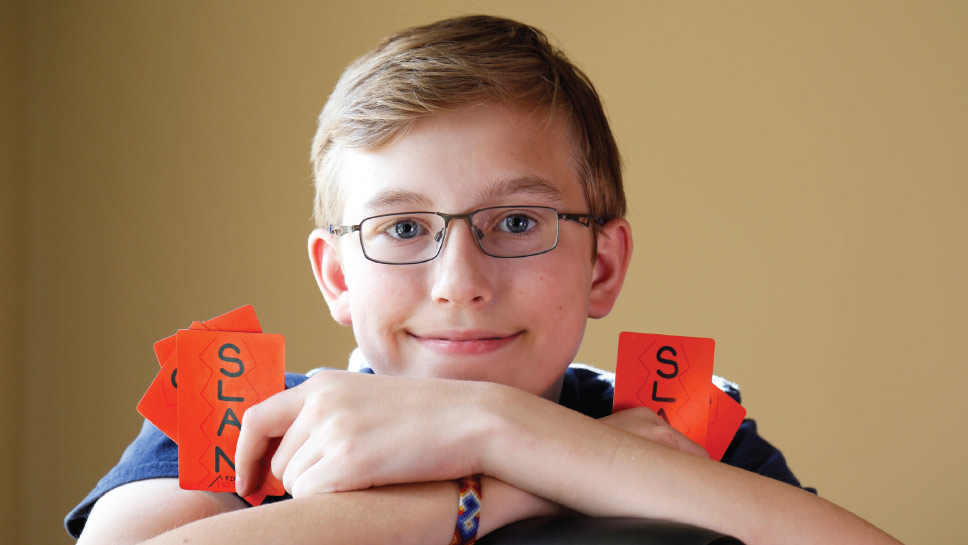 Not just playing around, Owen Schuler takes his game to the market. PHOTOGRAPHY BY MONICA KASS ROGERS

“Ever since I was little, I’ve loved playing both board and card games,” Owen explains. “Early on, it was games like Sorry, Trouble, Yahtzee, Monopoly, Rummy, War, and Poker. Then, over time, I got into games like Near and Far, Magic and Catan. I like games like these better than video games because I like the feel of the cards or pieces in my hand, and I really like having real people with me to interact with.”

Playing these games, Owen says, quickly led him to want to think up his own.

“I made one called SPLANET, where you travel from planet to planet to collect resources. Another one was called SPACE WAR, where you battle for different spaces on the board. I also made up lots of games involving marbles, such as one called PLOPPLE and another called FINGER SOCCER.”

Owen says he created SLAM just for fun. “I like that card games are easily portable and simpler to design than board games, and I just like the feel of cards,” he says.

SLAM is played with a bright, orange-on-one-side blue-on-the-other, 72-card deck featuring Owen’s own lettering and drawings, that fits into a hinged box he also designed. The deck is evenly distributed to players (2 to 4) and play revolves around participants trying to get rid of all their cards. Players do this by spelling out the word “S-L-A-M” and through strategic use of special “Dissipate,” “Sabotage”, “Redirect” and “Bomb” cards mixed throughout the deck.

Owen says taking SLAM from idea, to physical prototype, to finished product was a satisfying process he looks forward to repeating.

“It’s fun! First, I just think of a game idea, visualize how it all works in my head, and then write notes. Then I find the dimensions I need to make the design on Adobe Illustrator and use my drawing pad to create the design. I then transfer the design to the website of the company that prints the actual games, and create a few play test editions for friends and family to try. I wait for their feedback to make the final version. And then, I meet with store owners to see if they will sell my game.”

Currently, SLAM is available at Sage Explorers and Lake Forest Book Store, with plans for wider distribution on the way.

In the meantime, Owen’s been busy getting another of his games ready for market.

“This one is a board game called SKIRMISH that we have been play-testing at home over the last month. Of all the games that I’ve invented so far, it’s my dad’s favorite,” says Owen. “It’s a 2 to 4 player game, that involves laying down tiles on squares on the board to claim as your territory. Each player gets 96 tiles they can use, and a jewel that represents their character.”

Does he have any advice to offer other kids who might like to create games of their own? He sure does.

1.) Save all your design work several times as your work in the computer. “I lost an entire design along the way with SKIRMISH and that was very frustrating,” he says.

2.) Double check everything and have a family member or two proofread your work before ordering anything. “This second printing of SLAM came back with a blank copy of the rules, which I had to recreate.”

3.) Start with a small quantity—only one to three initial copies of the game, in case there are any printing errors, like the writing on the inside flap of the box being upside-down, or something like that. “Ordering a large quantity of a game can be extremely expensive and if you send a mistake, there are no refunds.”

4.) Delegate as much as you can. “My mom always says, ‘Stick with what you are best at, and ask for help with the rest.’”

“Ask as many people as possible to help test out the game to make sure it’s great,” says Owen, adding: “Not every idea is a gem!