Oops. Olivia Douglass, with her Lake Forest High School field hockey team up 6-0 late in a game, whacked a shot past the opposing goalie in an under-level game. The year was 2015, Douglass’ sophomore season. Scouts coach Cat Catanzaro had called the dogs off before the goal, meaning the very good players on the team were supposed to pass first and look to shoot … in the next game.

Only a reserve player was allowed to take a shot at that juncture in the game.

“Olivia scored by accident,” recalls Catanzaro, now the school’s varsity field hockey and varsity girls lacrosse coach. “When she realized what she had done, nobody on the field felt worse than she did. Olivia was so upset. She felt badly for her teammate, felt awful that she had taken away an opportunity for that teammate to score. She went right up to that teammate and said, ‘I’m sorry, I’m sorry.’ ” 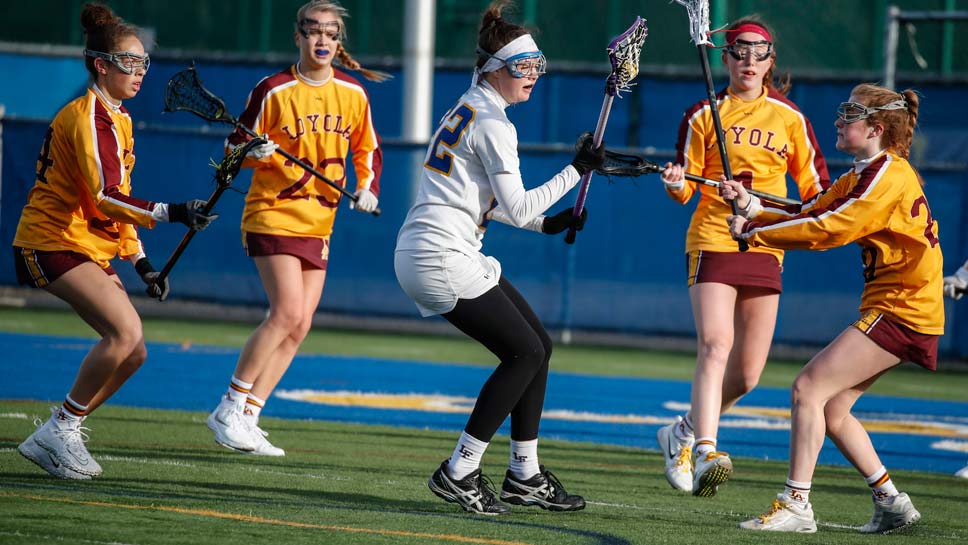 Spring of 2018, Douglass’ senior lacrosse season. Lake Forest High School’s varsity squad trails visiting New Trier by a wide margin in a supersectional game in late May. LFHS has possession, the ball nestled in the webbing of the stick in the hands of Scouts sophomore middie Gracie McGowan with a little more than 10 seconds remaining in the second half.

Scouts senior Audrey Kaus tells McGowan, “You have to pass it to Olivia.”

McGowan passes the ball to Olivia Douglass, who collects it cleanly and prepares to shoot.

The ball flies out of Douglass’ stick webbing and …

Olivia Douglass danced about as often as she breathed from second through eighth grade. Her home away from Lake Forest Dance Academy was the Douglass home. Douglass’ feet pounded the floor to the music associated with jazz and ballet and hip-hop and several other dance genres. Douglass and her dance troupe mates won competitions, serious ones, ones featuring the best troupes from other states in the Midwest.

“I loved dancing, loved doing it five days a week,” the recent LFHS graduate says. “My little sister, Ava [a freshman-to-be at LFHS], dances, and I sometimes get nostalgic when I watch her perform.

“At the start of high school, I chose a different path.”
Douglass — a daughter of former University of Wisconsin starting point guard Billy Douglass, whose stepfather, Bobby Douglass, passed footballs to Chicago Bears in NFL games in the 1970s — chose to become a three-sport athlete, suiting up as a forward in field hockey, a small forward in basketball and a middie in lacrosse. The only female varsity three-sport athlete at LFHS in 2017-18, the 5-foot-11 Douglass graduated with cum laude honors and eight varsity letters (two in field hockey, three each in basketball and lacrosse) and received the annual Female Senior Scholar-Athlete Awards selected by the school’s coaches.

“Olivia’s biggest thing in her athletic career at Lake Forest was her ability to use her experiences in other sports to improve her game in the sport she was playing at the time,” Catanzaro says. “She became a better athlete and a valuable teammate in all three sports by developing her skills in each of her sports.”

University of Wisconsin-bound Douglass played on two state championship field hockey teams (2016, 2017), pacing the ’16 edition in scoring; served as a two-time captain and was a two-time Sportsmanship Award honoree in basketball; started for three varsity lacrosse teams and earned all-conference honors in ’17 and ’18; and, unofficially, came up with the most creative choreographed greeting during pre-tip introductions in hoops.

You’ve seen those convoluted greetings, when two teammates slap, shake and bump hands at a dizzying rate and then sometimes follow that up with an airborne collision of upper arms.

“Olivia’s [greeting] was the most complicated, mostly because hers involved some kicking,” recent LFHS graduate Annie Aberle says. “But we got really good at doing it by the end of the season.”

Douglass’ favorite moment in basketball? Easy. The Scouts edged Warren’s Blue Devils in a low-scoring game for a Class 4A regional title in 2017. Those two state titles in field hockey thrilled her. Her memories of LFHS avenging a loss to Stevenson to capture a 2018 sectional title in the inaugural Illinois High School Association girls lacrosse season will stick around for decades.

“I’ve been fortunate,” the oh-so-humble Douglass says with a quick smile. “My dad never pushed me in athletics. Not once. He was so supportive through the years, so motivating, always there to give me tips, advice. His extensive background in sports helped me tremendously. My dad loves sports, loves to coach.

“And my mom [real estate broker Sondra Douglass, another UW-Madison graduate] is the hardest worker and most optimistic person I know. I’m family-oriented.”

Douglass’ sports “families” appreciated her team-first, me-last approach. She was one selfless “sib” — in field hockey, in basketball, in lacrosse. Aberle called Douglass “the glue” of her teams. Kaus’ most passionate and devoted teammate in her two sports (basketball and lacrosse) was Douglass.

“Olivia wanted everybody to contribute in each game she played,” Catanzaro says. “You’re not going to find many who are as thoughtful and as caring as she is. You know what else made her such a valuable teammate, in addition to her skills? Her demeanor. It was usually very calm, reserved. Nothing rattled her. Olivia’s teammates, near the end of a close, intense game, would look at her, notice how relaxed and in control she was and then think, ‘OK, everything is fine.’ ”

The ball flies out of Douglass’ stick webbing and … zips past the Trevians’ goalkeeper. Goal, LFHS. With 10 ticks left. Happy, jumping Scouts swarm Douglass and embrace Douglass and refuse to let her escape for quite a while.

“Could not have happened to a better kid,” Catanzaro says.

In the stands, Aberle and Douglass’ other sister, LFHS junior-to-be Halle Douglass, sit together. Olivia Douglass’ goal moves them.

“Perfect. What a perfect way to end her final lacrosse season, her career as an athlete at Lake Forest High School,” Aberle recalls. “Halle and I looked at each other right after Olivia scored.

“We both got emotional.”