Winnetka resident and Chicago’s The Second City alumnus Richard Laible is getting back into stand-up with a new comedy series, “The Book Stall After Dark.”

“I wanted to bring downtown to the North Shore,” Laible said, explaining why he decided to start a comedy show in Winnetka.

The first comedy night was held on June 12 at The Book Stall in Winnetka, featuring three comedians and Laible as host of the event (the next show is July 17). Laible, who now serves as the master of ceremonies at large corporate events, relied on his connections in the entertainment industry to put together a show comprising veteran comedians such as Tim Walkoe, who is the headliner of the June show. In addition to experience as a headliner at more than 100 comedy clubs nationwide, Walkoe has appeared on HBO, Showtime and A&E.

Laible was inspired to start his own comedy series after dipping his toe back into stand-up comedy at the Wilmette Theatre. He realized North Shore residents were interested in seeing quality shows close by. 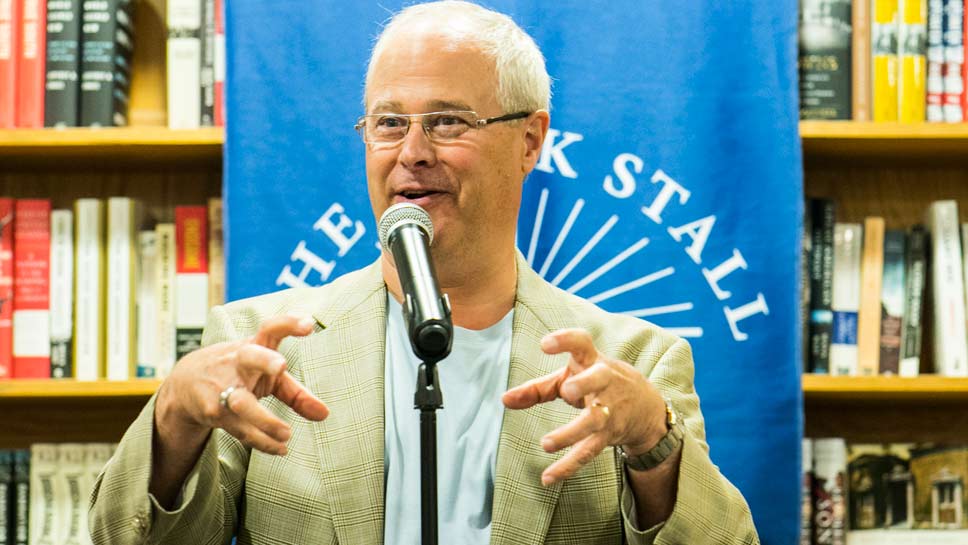 MC and producer Richard Laible of Winnetka starts the comedy show at the Book Stall. PHOTOGRAPHY BY JOEL LERNER/JWC MEDIA 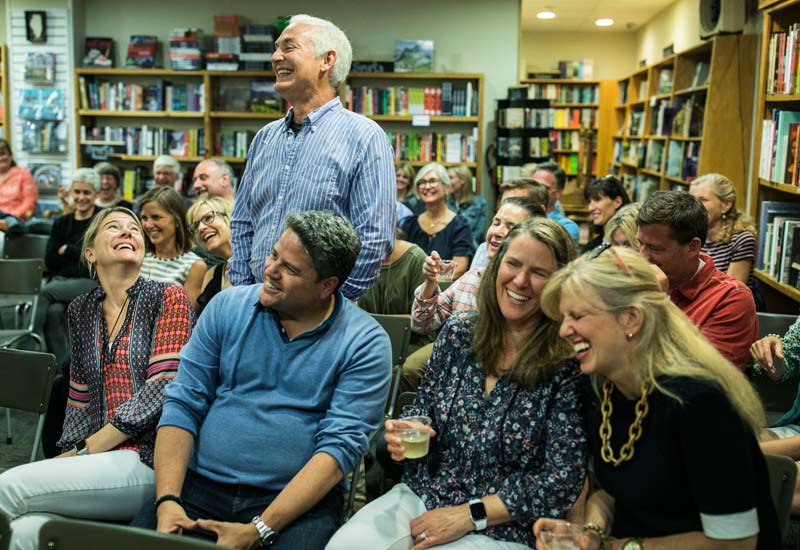 Andy Denenberg of Winnetka (standing) was part of the comedy at the Book Stall .
Joel Lerner/JWC Media

“The idea is to go to a restaurant here before the show and have fun while we are doing it,” Laible said.

Initially Laible was looking at restaurants as the venue of his comedy series, but after seeing Amy Sumpter perform as part of The Kates comedy troupe at The Book Stall, he changed his mind. Laible approached Stephanie Hochschild, owner of The Book Stall, with the idea of hosting the comedy series at the book store.

And the comedy series is in line with Hoschschild’s conscious effort to make The Book Stall a community gathering place. “We are both doing it to get people together and create a sense of community around town,” Laible said.

When Laible began to put together the comedy series, his focus first and foremost was on funny. He looked for comedians that have a solid act and video he could preview. Laible wanted to make sure the comedian’s could make him laugh. “Comics are the worst in the world. If you can make a comedian laugh you are good,” he said.

Laible, who worked as a comedian in the 1980s, acknowledged that many of the comedians at that time were exclusively white men. He hopes to bring more diversity to his lineup, including female comedians such as Amy Sumpter and Denise Medina, who both perform with The Kates comedy troupe — and people with different perspectives.

Laible’s lineups include comedians who stick to one-liners, some who like to tell funny stories and others who use silly songs.

“Just kind of different point of views. Some people are low lying. You just want to mix up the personalities on stage,” Laible said. 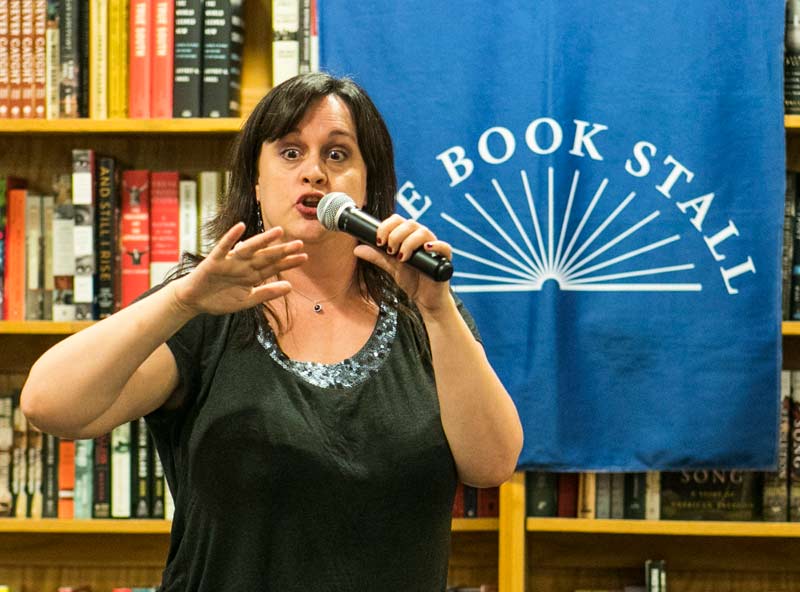 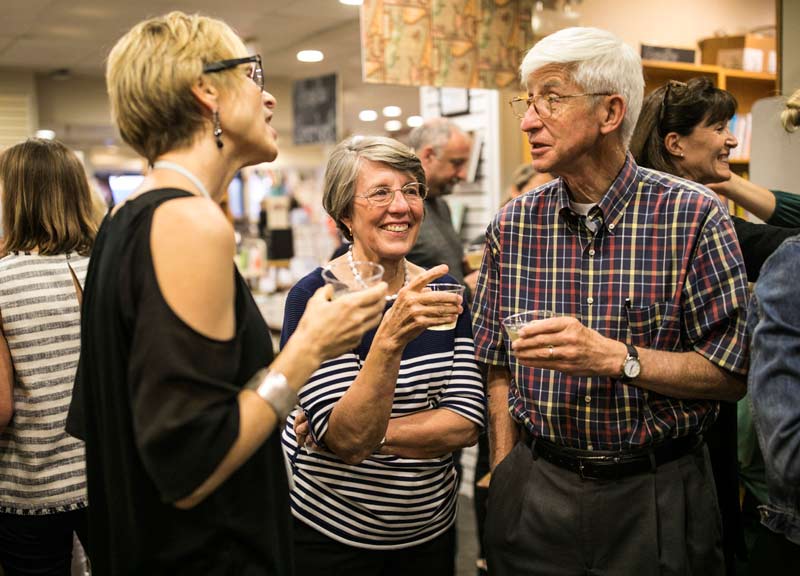 Ann Grote of Winnetka Jane and Chuck Dowding of Winnetka before the comedy show at the Book Stall.
Joel Lerner/JWC Media 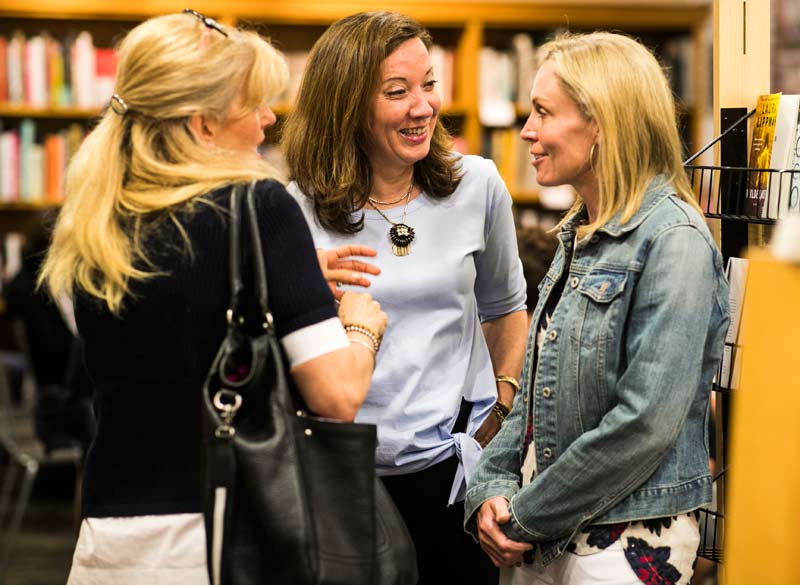 Nicole Jakob of Winnetka, Jeannie Balsam of Glencoe, and Stephanie Barry of Glencoe at the Book Stall before the comedy show.
Joel Lerner/JWC Media

So far the comedy series includes two events, the June show (which sold out long before the event), and a second show on July 17. Laible’s plan is to make the series a monthly event at The Book Stall, where he can build an audience as well as create a community for comedians.

“I just want this to be a fun place for real comics to work out their act,” he said.

For more information about “The Book Stall After Dark” comedy series and to purchase tickets go to www.thebookstall.com.