Abby Wood has brownish-red hair, a red some have called auburn, strawberry blond, or even chestnut. But when she stands in the sun the red sparkles brighter, like the cherry red “C” in the middle of the Cubs hat she’s wearing.

“It’s my lucky Cubs hat,” she says, touching the frayed brim of the cap and grinning. “I wear it … a lot.”

Wear it she has, and does, and will—not just as a Cubs fan, but because the hat has become an emblem of hope, perseverance, and survival in Wood’s fight against cancer. Wood, who grew up in Lake Forest, started wearing the hat during her junior year at Princeton University, to cover her then-completely-bald head while she went through chemotherapy. She wore it watching baseball games that distracted her from moments of intense pain during seven months of cancer treatment. She wore it when the Cubs won the 2016 World Series. And she says she’ll almost certainly wear it during her wedding week this fall, which comes just after her ten-year anniversary of being cancer free. 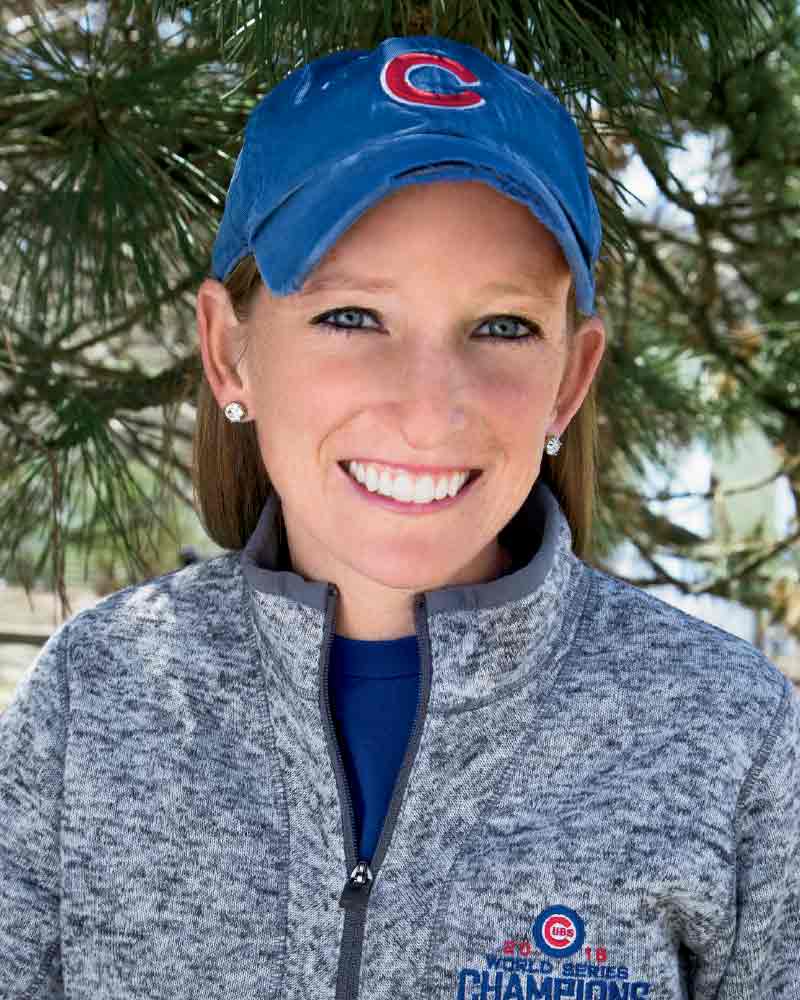 Abby Wood’s old blue Cubs hat is more than lucky: It’s an emblem of hope, perseverance, and survival in the fight against cancer. PHOTOGRAPHY BY MONICA KASS ROGERS

“We’ve been through a lot together, this hat, baseball, and I,” she says. “And the journey continues!”

A few years ago, Abby wrote a story about all she went through with the hat for a cancer-survivors newsletter. Serendipitously, fellow cancer survivor and New York Met’s General Manager Sandy Alderson read the story and brought Wood out to a Cubs-Mets game where she met more fellow survivors: Cubs first baseman Anthony Rizzo and Cubs pitcher Jon Lester. Through this, Wood learned about Lester’s NVQT (“never quit”) campaign to fight pediatric cancer, and has stepped up to help with the nonprofit.

“One thing just led to another,” says Wood, who is now an account manager for Tempus, a Chicago technology company empowering doctors to deliver personalized cancer treatment through big data and analytics. “The hat has been lucky for me, and, I want to pay that forward to help other kids who have cancer.”

Diagnosed with Stage IV Hodgkin lymphoma when she was 21, Wood relocated to New York City to receive treatments at Memorial Sloan Kettering Cancer Center. “When my hair fell out after the first round of chemo,” says Wood, “My parents had some really nice wigs made for me. But I was just not a wig person—they didn’t feel like me.”

The Cubs hat on the other hand, totally did.

“Casual, easy, sporty … it fit me and everything baseball represented to me. I had been a Cubs fan since I was tiny. So, I started wearing the Cubs hat all the time.”

Strengthening the baseball connection, following every session of chemotherapy, Wood had to have an immune-system boosting shot that was very painful, and baseball proved the perfect panacea.

“Watching baseball just worked for me. There’s something about watching people outside in summer at a game that’s very soothing. It drew me in, brought me out of where I was, helped me hang on to who I was. I could imagine myself sitting there eating a hotdog, feeling the sun. Remembering the days as a kid with my twin sister Daisy, heckling the pitchers to throw us a ball,” she smiles.

Declared cancer-free in August of 2008, Wood kept wearing the Cubs hat. “When I went back to finish college, I wore it until my hair grew back. And although I don’t wear it every day now, I do wear it to every Cubs game. I wear it every time I go back to Sloan Kettering for checkups, and anytime I fly on a plane.”

She wears it, too when she meets with young people who have been diagnosed with cancer, to help cheer them on and encourage them through their upcoming battle. Wood will also don her Cubs hat on July 20th at Jon and Farrah Lester’s NVRQT event.

Each year, Lester and his wife Farrah host a party with all of the Cubs players and coaches to benefit the NVRQT campaign—this year Wood, and her lucky Cubs hat, will be there too as part of the NVRQT committee.