Jessica Carr became an international champion — as a rookie.

The first-year DECA member and Glenbrook North High School student, who completed her junior year this spring, traveled to Atlanta in April for a DECA event to battle against other emerging leaders and entrepreneurs and topped the advertising category with her project partner, classmate and lacrosse teammate Samantha Leibow.

Carr and Leibow devised a marketing campaign for PB2 Powdered Peanut Butter. Their presentation at the DECA International Career Development Conference included a video, handouts for the judges and a thorough, 11-page paper outlining the strategies of the campaign and assessing the product’s primary competitors. 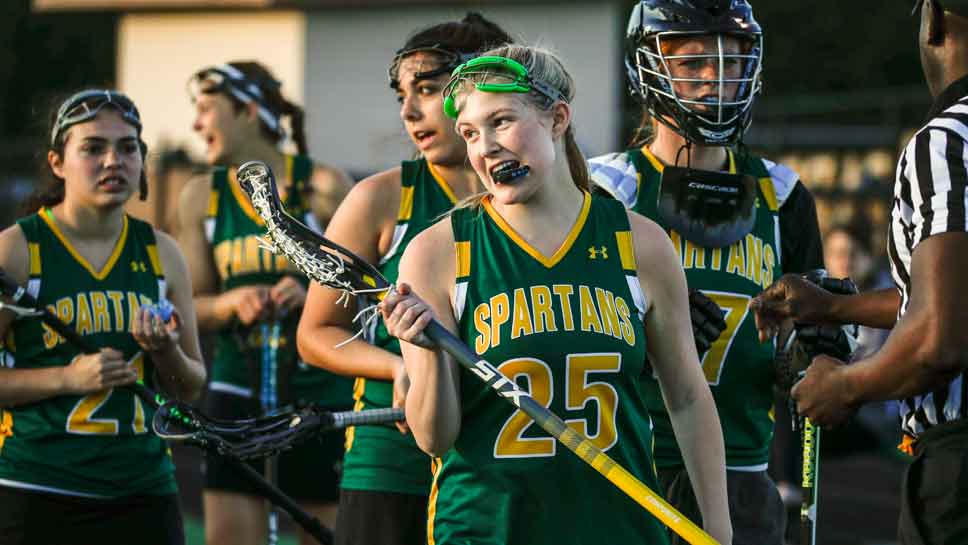 Students from Canada and Hong Kong, among other countries, also vied for first-place honors at the conference.

“Shocked. We were shocked we had won,” Carr recalls. “I was nervous, but I came away thinking, ‘I wish I had become involved with DECA [formerly known as Distributive Educational Clubs of America] earlier.’ ”

She returned home with more than a striking glass plaque attached to a wooden base; Carr had also gained immeasurable confidence.

That Carr was a Women in Business club member at Glenbrook North in the 2017-18 academic year should surprise no one. Women CEOs and company owners from a variety of fields spoke to club members at breakfast gatherings held at the school.

“That would be cool, yes, being a CEO someday,” Carr says.
So would a position related to a company’s personnel, she adds. Her mother, Gayle, serves as a human resources manager.

“She’s great,” the daughter says. “My mom tells it like it is, plus she’s always encouraging. I love it when she tells me interesting stories about her job and her workdays.”

History classes thrill and fascinate Carr, especially when they’re taught by Robert Gallivan, whose energy and enthusiasm for the subject matter never fail to stir and inspire his students.

“Mr. Gallivan gets everybody to participate in class with his love for teaching and with his love for history,” Carr says. “My favorite class, usually, is history, any history, though I really enjoy learning about U.S. history. The 1920s in our country, what a decade that was. So much was going on then.”

The honors student is Google-certified. Carr joined the innovation team and worked in the IDEA (Innovation, Discovery and Engagement Area) at Glenbrook North, helping students with their Chromebooks. The IDEA at the Northbrook school is a professional development space and a gathering spot designed to foster a community of learners.

“Through this team I learned a lot about technology and computers,” Carr says.

Bytes will take a backseat to bites for Carr in the summer before her senior year. Carr, after all, plans to work as a waitress for the first time from June-August, as well as a nanny, instead of attending a camp. And she wouldn’t have to search very far if she ever needs someone to give her a boost after a trying day with a customer or a tot.

“My brother [Glenbrook North sophomore-to-be Matthew Carr] is very mature for his age,” Carr says of the lacrosse/hockey player. “He’s also such a positive kid. I like being around him.”