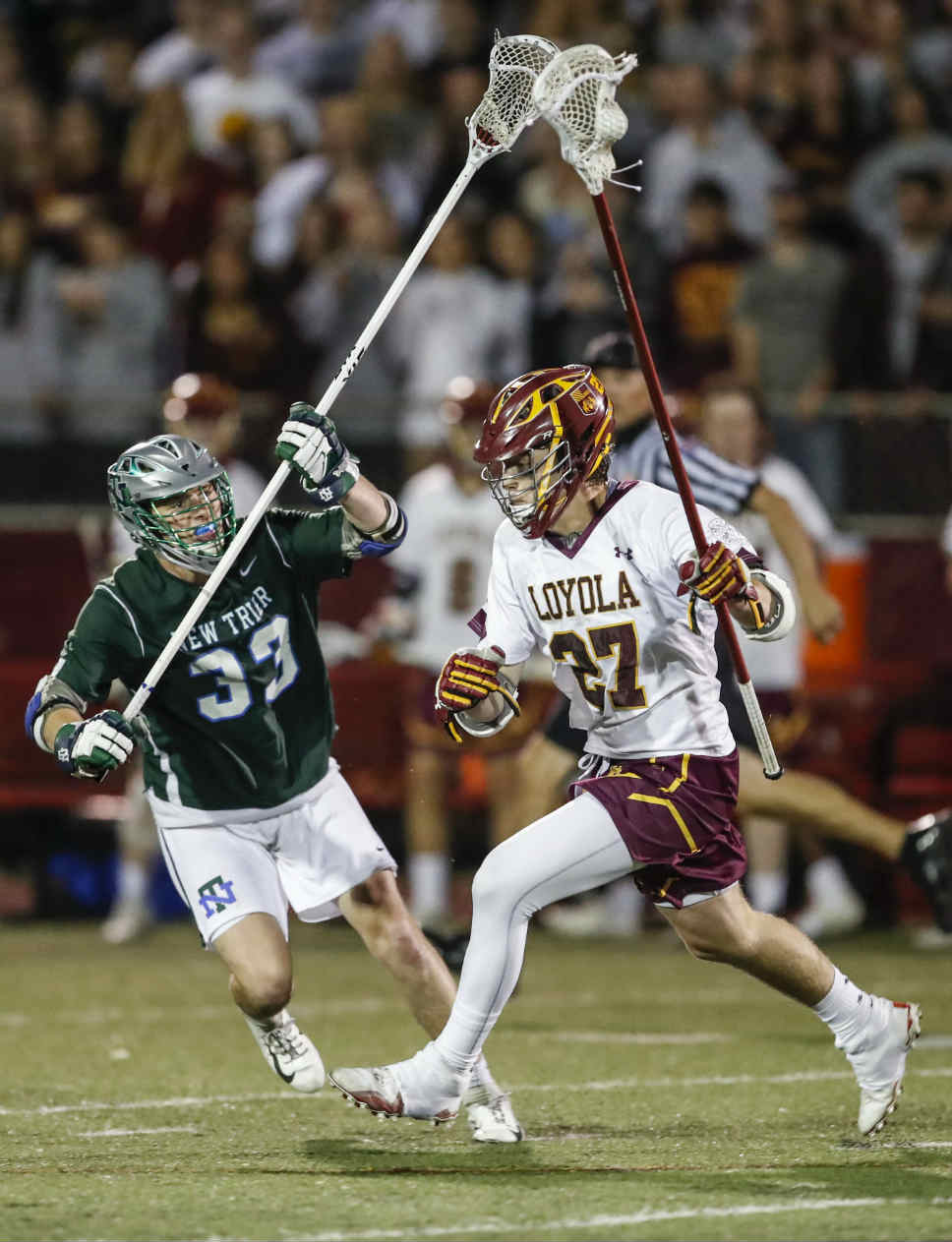 Luca Lazzaretto (No. 27), seen here trying to race past New Trier’s Nate Carlton during the state title game, was a defensive standout for the Loyola Academy boys lacrosse team. PHOTOGRAPHY BY JOEL LERNER

Luciano “Luca” Lazzaretto and his father, John, fixed a part of the fence in the Lazzaretto back yard in Lake Forest last week.

But Luca Lazzaretto, a 2018 Loyola Academy graduate and a son of a former University of Georgia/University of Illinois running back, did his best work on lacrosse turf this spring. The 6-foot-2, 205-pound defenseman — a long stick middie for the Ramblers in his first three years on varsity — played a stifling, integral role in LA’s 7-2 defeat of New Trier in the inaugural Illinois High School Association (IHSA) boys lacrosse state championship at Hinsdale Central earlier this month.

“His size, it’s second to none in most games, and then, when you combine that with his great speed, with his stick skills, with the intangibles he brought to each game …,” marveled Ramblers senior attack and Illinois High School Lacrosse Association all-stater Andrew Forsyth, a 2018 quad-captain like Lazzaretto. “And Luca was always calm and relaxed with the ball in his stick. His teammates relaxed when Luca had the ball in his stick. He was a commanding presence in games, a rock.

After his final lacrosse game in LA togs, the Princeton University-bound Lazzaretto received a bear hug from Ramblers defensive coordinator Brian Rynes (Loyola Academy, ’99) and then got an earful.

Rynes told his two-time US Lacrosse All-American (likely to be three-time) and two-time state champion (2016, ’18) that he had never played better than he had against the Trevians on June 1. New Trier (21-4) had entered the state championship game averaging nearly 14 goals per game in its previous six games but tallied only one goal in each half against LA (22-3).

“You have to play defense with a certain kind of mentality if you’re committed to being effective at that end of the field,” said Lazzaretto, a middie from the age of 7 until one of his True Lacrosse club coaches, Jake Deane, shifted him to defenseman in the seventh grade. “It’s also a physical position, incredibly physical, for sure. But our defense was a confident, intelligent one, playing for an intense, tell-it-like-it-is defensive coordinator. We played our best when there were six or seven of us constantly communicating, shouting things like, ‘Help’ and, ‘I’m sliding, I’m sliding.’ ”

Lazzaretto dropped back to pass for two seasons at Loyola Academy — without the aid of a lacrosse stick. The right-handed Luca hit the gridiron as a quarterback/wideout in his freshman and sophomore seasons at LA. The Ramblers’ 2014 freshman ‘A’ football roster listed Lazzaretto, Forsyth and future star varsity signal caller Quinn Boyle as QBs.

Lazzaretto’s older brothers, Brennan and Michael, played football at Hinsdale South when the Lazzaretto family lived in Burr Ridge. A left shoulder injury kept Luca off the football field in his junior year. He seriously contemplated returning to the sport last fall for the reigning Class 8A runner-up but opted to let a less-than-100-percent right shoulder fully heal before his final prep lax season.

“I grew up in a football family,” Lazzaretto said in his deep voice, the kind that is coveted by producers of movie trailers. “My dad, my brothers, they would always say, ‘Let’s throw it around in the back yard, run some routes.’ ”

“I didn’t like it at first,” Lazzaretto recalled. “First day, we did dimensional analysis, which is basically a lot of math. But I started loving chemistry after we got into atoms and moles and lab work. It became fun. My teacher was awesome.

“I’ve always been intrigued with medicine and how it works. Maybe I’ll become a neurologist someday; the brain is fascinating.”

In the summer before his rookie year on an Ivy League campus, Lazzaretto will continue to manicure his family’s yard, work out regularly, play the acoustic guitar, teach private lacrosse lessons to local youngsters. Count on him to also make time to play pass and catch with his little sister, Ellie, who scored 20 goals and assisted on seven others as a freshman attack/middie on LA’s varsity girls lacrosse team, which placed third at state earlier this month.

“Best game of his career,” said Forsyth, who plans to study business at UCLA. “Luca played so well. I remember a New Trier player attempting to dodge Luca and then pushing Luca, with Luca pushing right back. Luca lifted the ball [causing a turnover] to set up a clear. Another great clear he had in that game traveled about 45 yards.”

Lazzaretto’s lengthy pass was dead-on, landing in the webbing of a striding teammate’s stick, the equivalent of a hoopster swishing a half-court shot in basketball.

And a baseball player going … yard.