Boy Scouts of America, the second largest youth organization in the United States, is going co-ed.

This fall, Cub Scout pack and den leaders across the country will officially open their doors to girls, paving the way for a new, groundbreaking approach the Boy Scouts of America calls “Family Scouting,” and a fundamental restructuring of dens, troops and packs that would allow girls to earn BSA’s prestigious Eagle Scout rank.

On June 1, BSA’s Northeast Illinois Council (NEIC), along with 271 BSA councils across the country, rolled out gender-neutral Cub Scout handbooks and marketing materials in preparation for the organization’s fall 2018 recruiting season, when girls aged 5-10 will be formally welcomed into the Cub Scouting community. 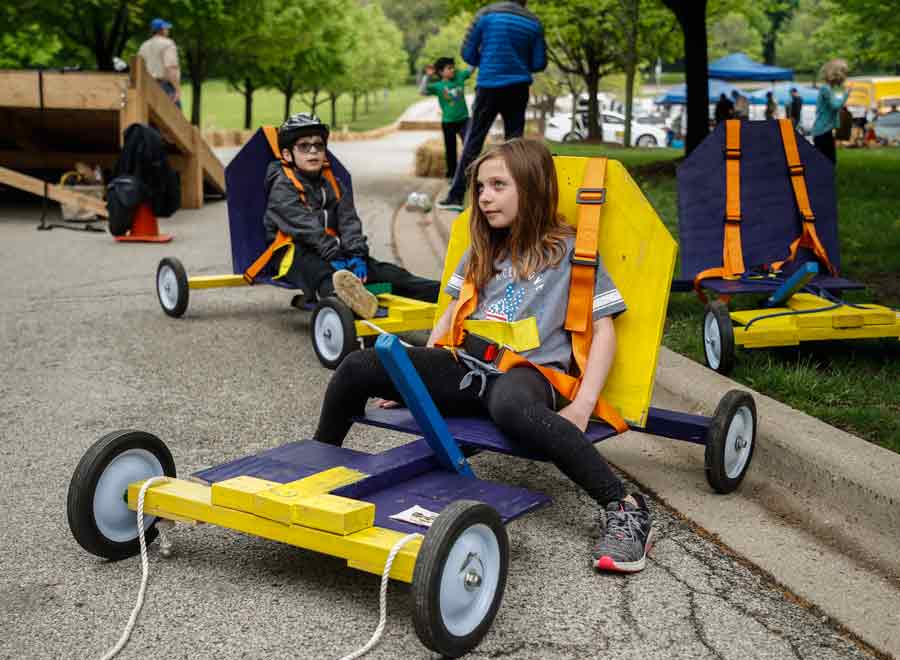 Mia Weiler, 9, and Evan Weiler, 11, who is a Webelo Scout in Cubs Scout Pack 48 in Lake Forest, sitting on pinewood Derby cars at the Cubmobile event in Libertyville. PHOTOGRAPHY BY JOEL LERNER/JWC MEDIA

“In years past when I would hold recruitment events, a few girls would always show up looking to join,” said Zachary Knoch, senior district executive of the NEIC. “All I could do was send them to the Girl Scouts. Up until now, we haven’t been able to serve all kids in what we feel is a great program.”

An estimated 4,000 girls nationwide have already participated BSA’s 3-month, soft-launch Early Adopter program that kicked off in January of this year, including three new female Cub Scouts who joined packs in Highwood, Lake Bluff and Mundelein.

But Knoch said local interest in BSA’s new Family Scouting program is rapidly gaining traction. As part of the organization’s national Scout Me In marketing campaign, the NEIC welcomed approximately 125 boys and girls at a recent BSA-sponsored Fun Day on May 19 in Libertyville’s Adler Park, featuring Cub Mobile rides, climbing walls and an archery range. Family Scouting was showcased again at a recent recruitment night in Lake Bluff, attended by five girls and seven boys.

Under BSA’s new co-ed structure, families can choose to sign up their sons and daughters for Cub Scouts, however, BSA’s chartered partner organizations – predominantly faith-based institutions or civic groups like Rotary, Kiwanis or Lions Club – may choose to establish a new girl pack, establish a pack that consists of girl dens and boy dens, or remain an all-boy pack.

Cub Scout dens will be single gender, but boys and girls will join together for pack events like Pinewood Derby, campfires, and camps.

Executive Board members of Lake Bluff’s Pack 42 plan to meet soon to discuss the issue of going co-ed.

“If there’s interest and enough parent volunteers to organize meetings and activities, we’ll find a way to make it happen,” said Kristin Flentye, who has two sons in Cub Scouts and currently serves as the pack’s membership coordinator.

Using the same curriculum as the Boy Scouts program, the organization will also deliver a new program for older girls, aged 11-17, to be launched in February 2019, allowing them to earn the Eagle Scout rank. This new program, featuring both separate and linked troops for girls and boys, will be renamed “Scouts BSA.”

Convenience, say BSA officials, is the primary force driving the organization’s decision to go coed. BSA research suggests that today’s dual-earning and single-parent families are busier than ever, with less free time to devote to gender-exclusive activities.

“We found that families with both boys and girls are being split and often have to make a decision about where to concentrate their time,” said Knoch.

According to Knoch, sisters have been a presence at Cub Scouting events for years, often out of necessity when one or both parents are involved on behalf of a brother.

“Girls would tag along to the meetings and do all the activities but wouldn’t get the badge or the recognition,” said Knoch.

But not everyone is buying in to the notion that girls belong in Boy Scouts. Nancy Wright, CEO of Girl Scouts of Chicago and Northwest Indiana, believes girl-only Scouting is more important now than ever before.

“What we’re seeing throughout the marketplace is that digital technology and social media have actually amplified the need for all-girl, safe spaces to help girls build self-esteem and navigate their way through the complexities of today’s world,” said Wright. “We’re very confident in the environment we’ve created for girls. That hasn’t changed.”

At the same time, Wright also understands that families may seek coed Scouting to suit their lifestyle.

“People are going to make that decision themselves,” said Wright. “We are not going to judge what parents choose.”

Even Knoch and his BSA colleagues admit the future of girls in Boy Scouting is still unclear; widespread demand for coed packs within the Northeast Illinois Council remains to be determined and transition could take several years.

“I won’t lie…this is a big change for us,” said Knoch. “But when you look at Scouting across the globe, Boy Scouts of America is one of the few programs that’s not coed,” said Knoch.

Of the 169 countries with Scout groups governed by the World Organization of the Scout Movement—which includes the Boy Scouts of America—just 13 prohibit girls from joining, including Sudan, Saudi Arabia, Swaziland, Barbados, and Papua New Guinea. Scouts Canada has been co-ed since 1993.

For Knoch, a former Eagle Scout, who now lives in Mt. Prospect with his wife, two sons and daughter, the advent of coed Scouting here in the United States is a welcomed opportunity for precious family time. Once they’re old enough, Knoch plans to enroll all his children in Cub Scouts.

“I’m excited that we can do this together,” said Knoch.