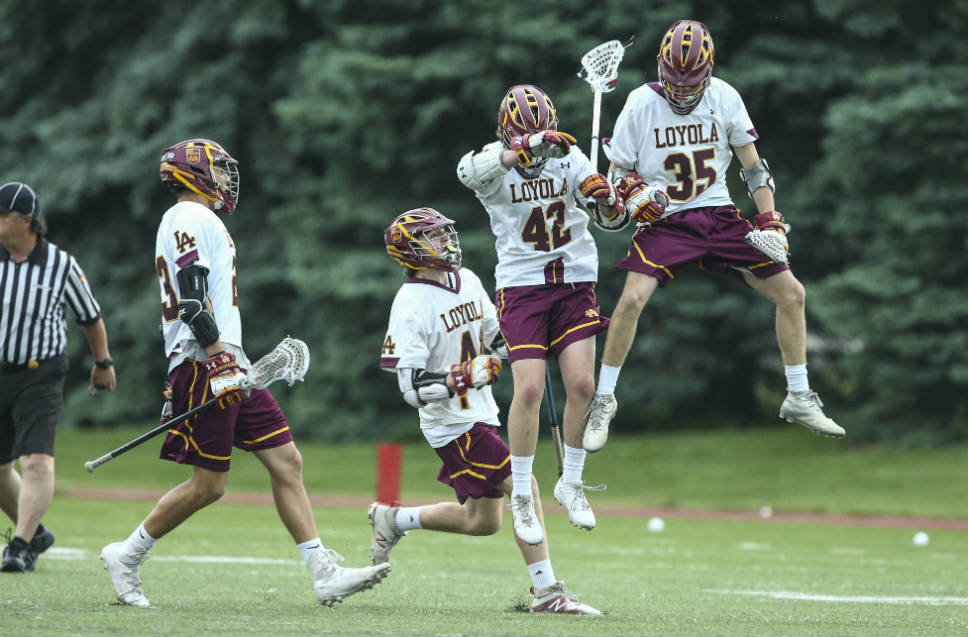 Members of the Loyola Academy boys lacrosse team — Timmy Hackett (No. 35), Kaden Keller (No. 42), Danny Murphy (No. 4) and Connor Koch (No. 23) — celebrate a goal during their state final win over New Trier. PHOTOGRAPHY BY JOEL LERNER 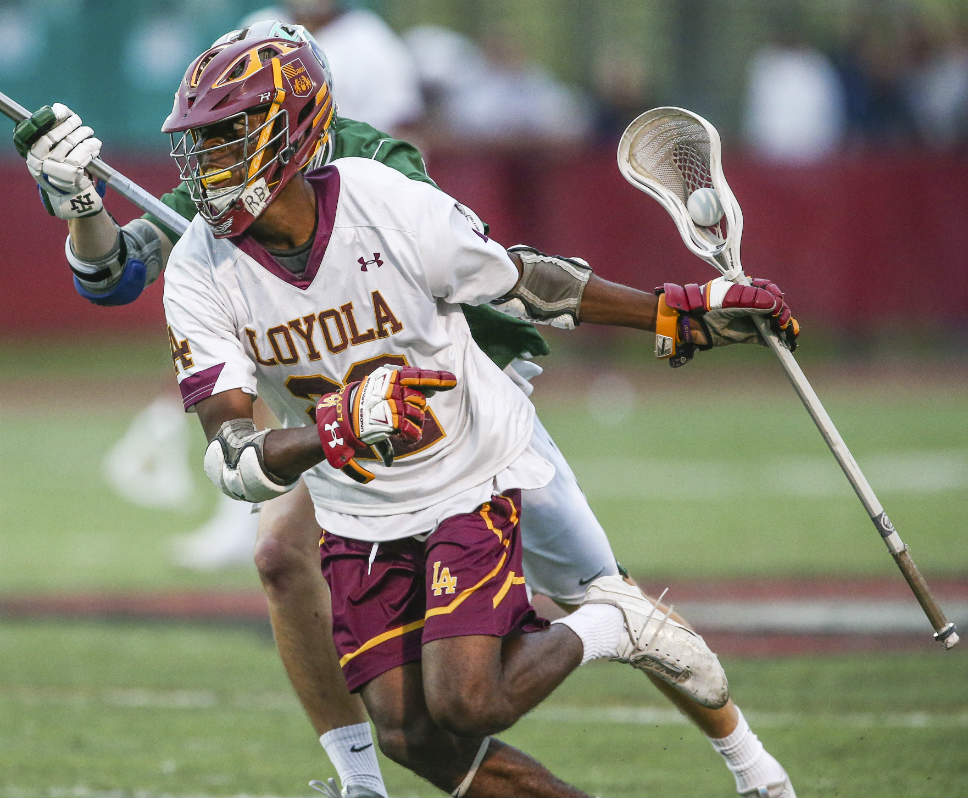 “We played tonight for those freshmen in college,” Ramblers junior middie Najee Taylor said June 2. “We knew they were up there.

The ’17 lax men and others witnessed LA — in complete control from the first face-off to the celebratory flinging of sticks and gloves and helmets — dismantle rival New Trier 7-2. The victory also avenged LA’s 5-3 loss to NT May 1 and knotted the all-time record in LA-NT boys lacrosse state championship games at 12-12.

“Our theme today, and it’s what I told our players after mass, was, ‘Play for the championship, not to beat our rival,’ ” Ramblers coach Rob Snyder said. “The face-offs we won early, the start [3-0, after one quarter] we got off to, how we possessed — big factors, all of them. Possession was huge for us today, a big deal, because it kept our defense fresh, and a fresh defense enabled us to press the way we wanted to press against a team with dodge-heavy players [junior attacks Henry Freedman, Henry Scherb and Dylan Bruno] up top.”

Loyola Academy (22-3) needed only 35 seconds to tally the game’s first goal. Junior middie Timmy Hackett gave those clumps of former players a reason to stand and cheer with the first of his two goals.

Ramblers senior attack Andrew Forsyth struck for a goal a little more than three minutes later, and Taylor, easily one of the most exciting players in the state, released a dazzling pass to senior attack Quinn Callahan, who capped the scoring in the first frame with the first of his three goals at the 1:56 mark.

“Shifty, isn’t he?” Callahan said of Taylor, who verbally committed to play lacrosse at the University of Notre Dame. “Najee does anything he wants to do on a lacrosse field, and whatever it is, he usually does it well.”

The 5-foot-11 Taylor — one of six Loyola Academy IHSLA all-staters, a wideout/cornerback in football and a Des Plaines resident — picked up a lacrosse stick for the first time as a 4-year-old in Cockeysville, Maryland.

How sizzling of a lacrosse hotbed is the state of Maryland?

Lacrosse in Maryland is akin to ice hockey in Canada and sunshine in Florida.

Taylor’s game in Illinois has been electric for years, with the way he darts and dashes and distributes. He used his stick webbing and superb instincts to dish a trio of assists (to go with a goal) in LA’s 15-7 defeat of Naperville North in a state semifinal at HCHS May 31. His combined four assists in two state games last weekend upped his total to a team-best 26.

At the other end of the field in last weekend’s state championship tilt, with LA owning a 5-2 lead in the third quarter, Taylor thrust his stick due north to deflect a rapid shot from New Trier junior middie Gavin Randle.

“Najee,” Snyder said, “does some great stuff out there. He gets to the cage, draws double teams. People come after him.”

People fire shots at LA junior goalie Dominic Urukalo. Shot takers come away empty, often. The 2017 All-American and 2018 IHSLA all-stater allowed only a goal from Randle and a goal from New Trier senior middie Johnny Maday and collected 14 saves in the state final.

“Lights out — that’s how he played,” said Callahan, a Glenview resident who played most of his youth hockey with a Kenilworth-based lacrosse club, which also developed many of NT’s current players.

“Clutch guy,” Taylor added. “A rock, a great goalie. We love playing when he’s in goal.”

“We made a million unforced errors,” Trevians coach Tom Herrala said. “Their goalie played well, and their team played well.”

“We had grinders, good fighters,” added Herrala, whose Trevs racked up a combined eight goals in the middle quarters of a 10-4 defeat of Glenbard West’s Hilltoppers in a state semifinal May 31. 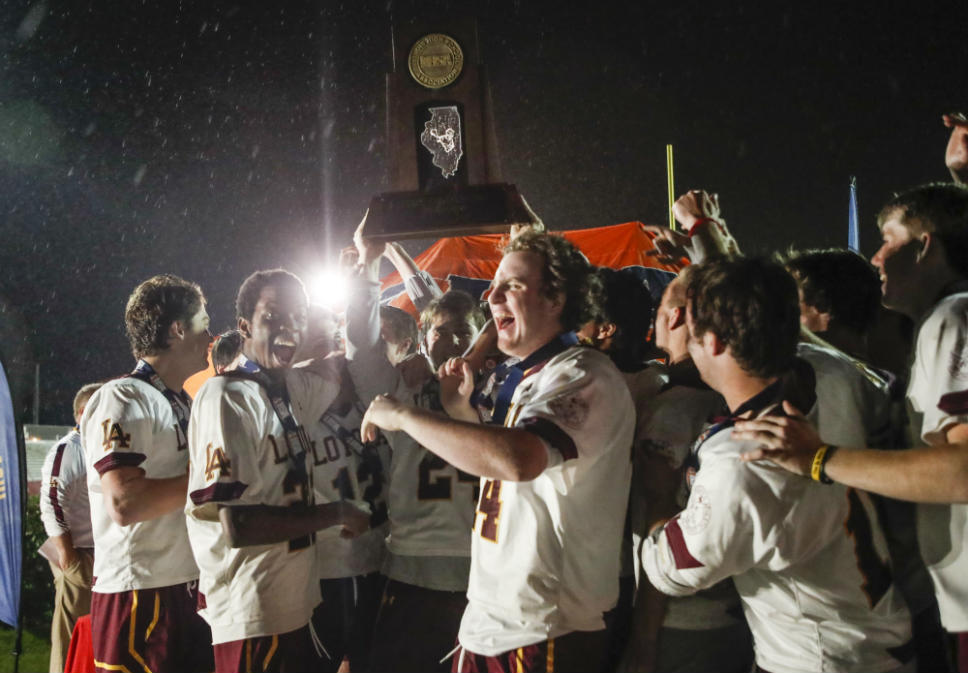 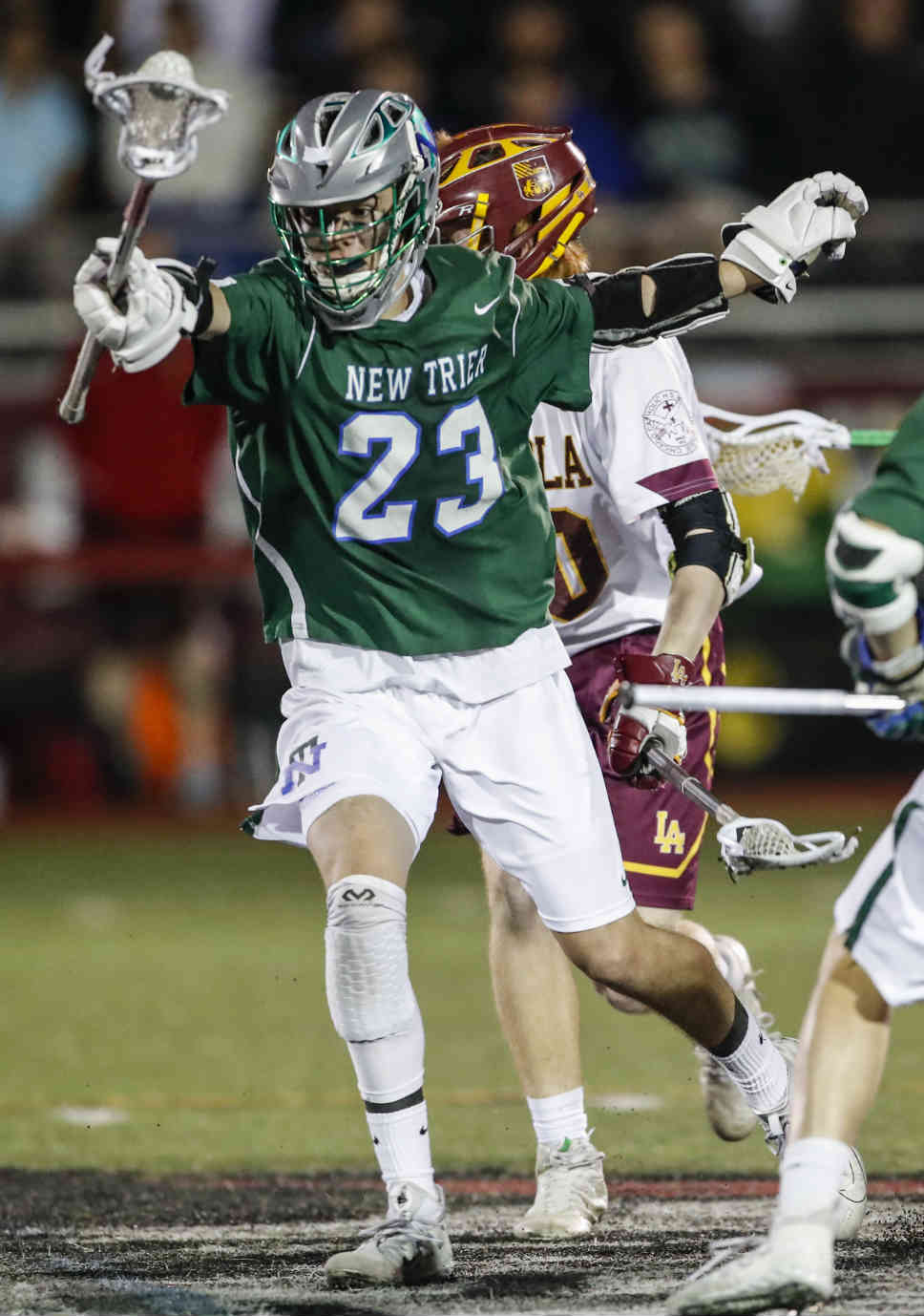 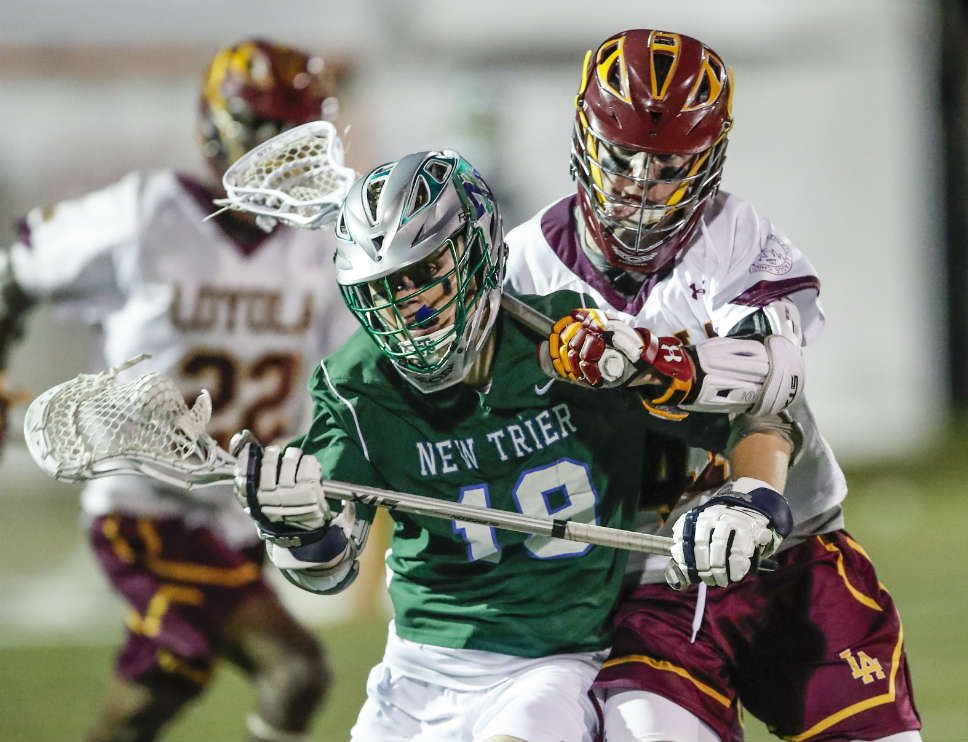 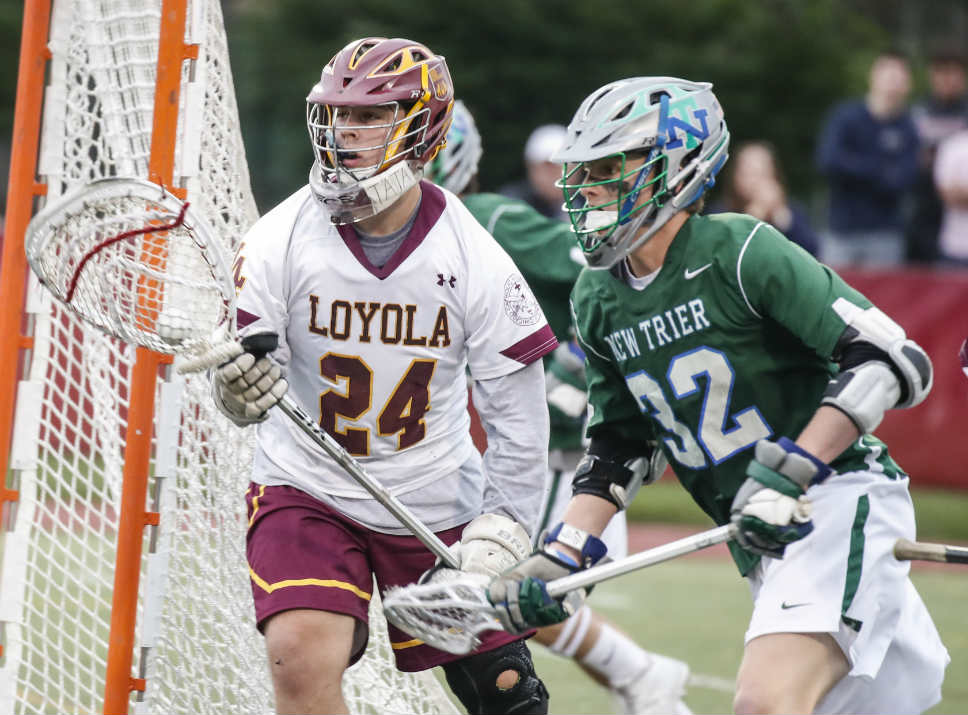 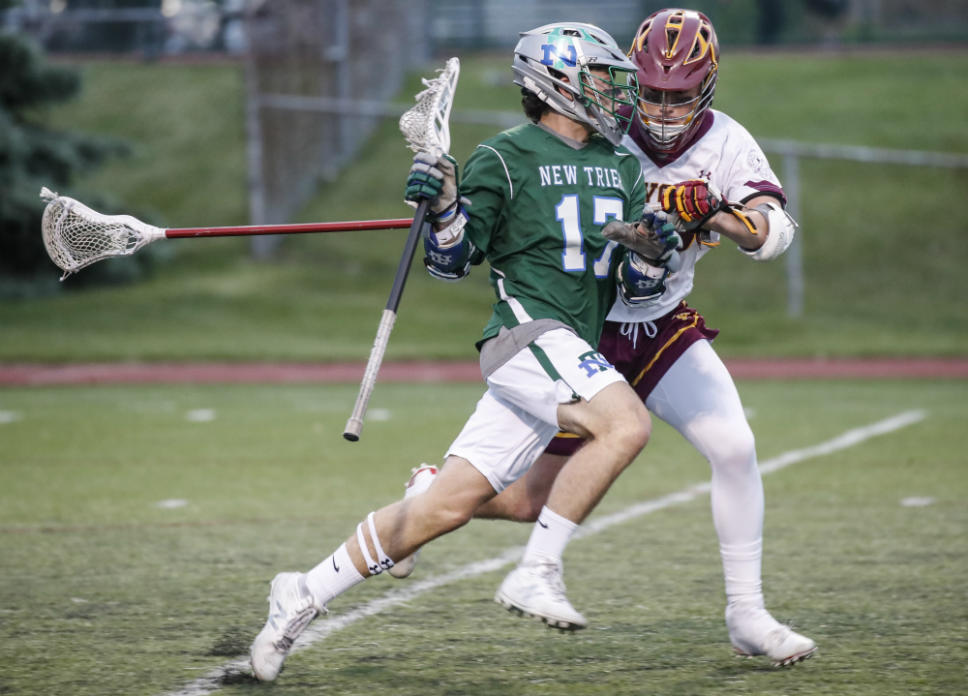 New Trier’s Henry Freedman (No. 17) attempts to sprint past a Rambler. PHOTOGRAPHY BY JOEL LERNER