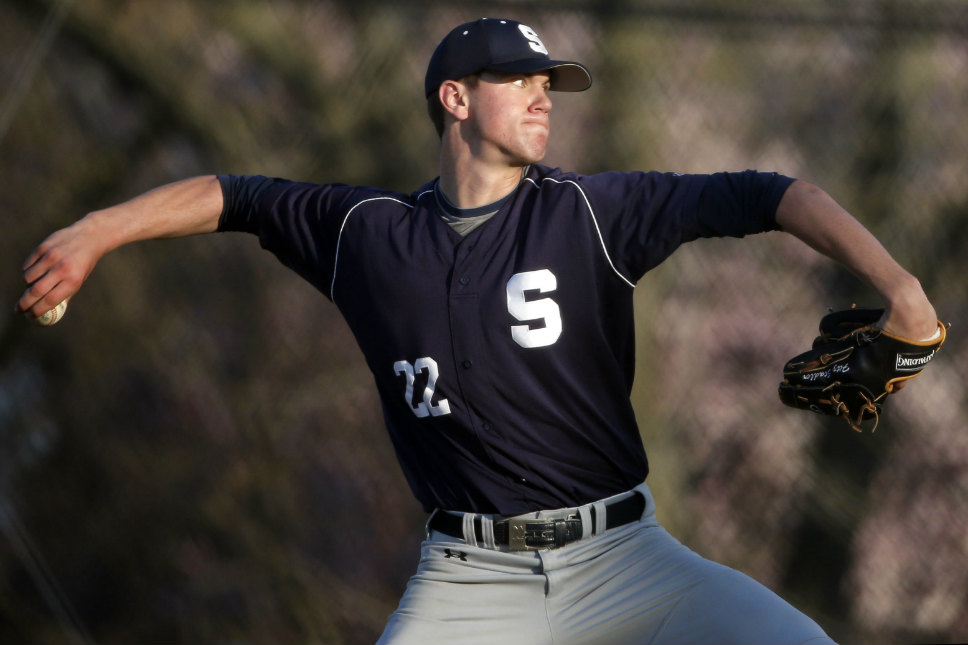 Fitz Stadler delivers a pitch during his senior season at Glenbrook South.

Editor’s Note: Glenbrook South graduate Fitz Stadler was drafted in the 18th round by the Toronto Blue Jays on June 6. The 6-foot-9 hard-throwing right-handed pitched three seasons at Arizona State University. He also was drafted in the 2015 MLB Draft by the Chicago Cubs. This story appeared in The North Weekend on April 25, 2015.

Though they are trying to blend in and be discreet, they don’t really go unnoticed.

They’re like secret service agents. Most of them were dressed in black and wearing shades on April 16. They were the fidgety ones, buzzing around and hovering behind the home-plate fence at Maine West High School trying to get a read on an 18-year-old phenom wearing a baseball cap and throwing BBs.

And they came armed … with radar guns.

Every time Glenbrook South’s Fitz Stadler headed to the pitching mound, they went on alert — like they were protecting the daughters of the President.

Stadler, as loose as they come when he’s playing the game he excels at, tried his best to take it all in stride — albeit a 6-foot-9 hurler’s stride.

He didn’t shiver or quiver. Shoot, he hardly threw a pitch wide.

Pro baseball scouts have become part of the landscape this spring — whenever the towering Stadler takes the hill, tugs the cap and toes the rubber.

“I try not to look at them, but it’s hard not to,” admits the slender 215-pound right-hander, who is flattered — and humbled — by all of the attention. “You have to go beyond it.

“But this is awesome,” he adds. “I’m definitely proud of where I am right now. I owe a lot to my coaches. And it’s good having good teammates to back me up. I’m just trying to pitch to the best of my ability.”

Stadler, who already has committed to one of the country’s best collegiate baseball programs (Arizona State), has become a known quality. He’s no longer, if you will, flying under the radar gun.

“There’s a lot to like, a lot to project with him,” says GBS pitching coach Travis Myers, a former standout hurler at Lake Forest High School and Illinois Wesleyan. “I’ve been contacted by half the league (MLB).

“So far,” Myers adds. “He hasn’t shown any signs that the pressure is getting to him. He goes out there and has fun.”

GBS head coach Steve Stanicek, who played in the majors for parts of two seasons (1987 with the Milwaukee Brewers and ’89 with the Philadelphia Phillies), knows what his prized pitcher is going through.

“This is different for him,” says Stanicek, who also has a brother (Pete) who played Major League baseball. “He’s excited and nervous at the same time.

“When he goes to the mound now, he looks up and sees 8 to 10 radar guns pointed at him. Every pitch,” the coach adds. “He’s got to stay focused.”

Unofficially, there were eight Major League scouts, including the national cross-checker for the Pittsburgh Pirates, at the Maine West ball diamond.

And Stadler — much to the delight of the scouts — had one of those shiny afternoons. He had the Masterpiece Theatre thing going … for five innings.

The Warriors didn’t get their first hit until the bottom of the sixth, when leadoff batter Jake Riportella bounced a grounder into left field.

Stadler, who features a fastball that touches 94 but sits in between 88 and 91 miles per hour, is good at missing bats. This can’t-miss prospect struck out 10 Maine West hitters in 5-plus innings in the 12-4 win. He mixed up his heaters — two-seam and four-seam fastballs — with a tight-breaking curve ball and an ever-improving change-up.

Stadler, who flashes his smile on the mound about as much he flashes his fastball, is not afraid to display his competitive fire. He pounded his right fist into his glove after the Riportella base knock.

“I was pretty disappointed,” he says. “I wanted to get out of there with a nice, clean victory. But, we got the win and that’s all that really matters.”

Stadler, a two-year starting — and throwing — quarterback for the GBS football team, pretty much has been unhittable in his last two outings. On April 7, in a 15-1 victory over host Carmel Catholic, Stadler tossed a five-inning no-hitter. He was overpowering, tossing 16 first-pitch strikes and winding up with 11 punch-outs.

“Fitz doesn’t give you a lot to hit,” says Myers, who calls all of Stadler’s pitches from the GBS dugout. “And he’s going to keep coming at you.”

No doubt, his repertoire can be challenging for hitters. He’s got a toolbox of pitches.

“That’s one of the things that I love about him,” says Stanicek. “He makes Travis’ job easier. He’s effective when he’s got two of those pitches going. And if he’s got three (or more) working, it’s like playing a video game.”

And, his delivery? It’s unusually smooth — and easy.

“It looks like he’s not hardly working out there,” Stanicek says. “He could air it out and throw a lot harder.”

He also could be doing the 100 butterfly or the 100 backstroke.

Stadler’s bloodlines are eerily good. His dad, Matt, was a Big Ten champion and All-American swimmer at Indiana University.

“For me,” says Stadler, “going to the pool or the beach is a hobby. I never got into the swimming world.”

Instead, he’s followed the huge footsteps of his two 6-4 older brothers: Walker and Sully. Walker is a former pitcher at IU. Sully is a current pitcher with the Hoosiers.

“I know he’s got a lot of support at home,” says Stanicek. “Fitz is the baby of the family, and so every one is paying a lot of attention to him.”

He’s getting plenty of mentoring.

“His older brothers are his two biggest critics. Walker especially likes to tell it like it is,” Stanicek says. “Which is okay with me.”

“I look at all that as a positive,” he says. “My brothers have taught me a lot. I owe a lot to them. They’ve carved a path for me.

“But I’m trying to be my own guy,” Stadler adds.

Last summer, Stadler did a little of his own trailblazing. He hooked up with the Downers Grove Longshots for weekend tournaments and showcases.

“It was the first time that I went out of Glenview to play for a (club) team,” says Stadler. “I continued to play for my high school team, but Coach wanted us to play more baseball.”

It worked to perfection. He competed in the Perfect Game Super 25 showcase in Phoenix. In fact, he pitched — and pitched well — on one of the backfields of Camelback Ranch Stadium, spring training site of the Chicago White Sox and Los Angeles Dodgers.

Then, during the first week in August, Stadler suited up for a White Sox team at the Area Code Games in Long Beach, California.

“I really think he already has a professional arm,” says Stanicek. “He’s got that exciting potential where you wonder what’s going to happen next with him.”