LAKE FOREST – The winners of the sixth annual Ragdale Ring Prize are Galo Cañizares and Stephanie Sang Delgado from Columbus, Ohio for their contemporary redesign of the historic garden theater originally created by architect Howard Van Doren Shaw in 1912. The 2018 design is called NOODLE SOUP, a whimsical, interactive playscape, flexible enough to accommodate a range of performances, and picturesque enough for it to seamlessly integrate into the scenery of Lake Forest. The lead designers and their team are now at Ragdale for a three-week design-build residency until June 15

The public unveiling and opening event on Wednesday, June 13 at 7 p.m. features the award-winning music of composer Jonas Friddle and the altfolk trio Sons of the Never Wrong. 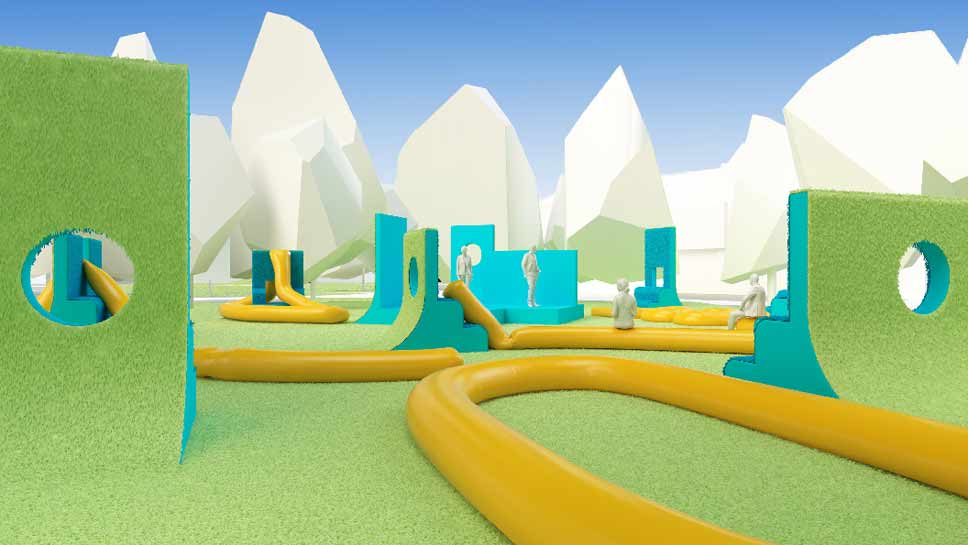 Wednesday, June 13 at 7 p.m.: RAGDALE RING PERFORMANCE: TRUE AMERICANA
The opening Ragdale Ring performance features the toe-tapping folk and country sounds of fiddle, banjo, guitar with composer/musician Jonas Friddle, his five-piece band, and the Sons of the Never Wrong. Guests are encouraged to bring their family, a lawn chair or picnic to enjoy an arts-filled evening outdoors at twilight. Admission is $20/person; $15/students and seniors, 12 and under free. Tickets can be purchased online at ragdale.org and also at the door. Ring performances take place at Ragdale, 1230 N. Green Bay Road in Lake Forest. Free off-site parking and shuttle service are available at the municipal lot on Oakwood Avenue north of Deerpath Road in Lake Forest.

2018 RAGDALE RING: Noodle Soup
The concept of NOODLE SOUP emerged from the architects’ intention to blend whimsy, playfulness and audience interaction into a transformable constructed landscape. NOODLE SOUP features a set of fixed structures around which are soft, linear, pliable pieces of furniture. The soft elements can interact with the hard structures to serve functional purposes, such as seating, but they can also act as oversized toys, freely configurable in a variety of ways. The environment will be accompanied by a small web-based app called “Ragdale’s Noodle Soup Cookbook,” which will provide visitors with possible arrangements for the landscape.

THE RAGDALE RING 1912
Architect Howard Van Doren Shaw designed the original Ragdale Ring as an outdoor theatre to accommodate the plays of his wife, Frances. Audiences of over 200 to 300 guests sat on Shaw-designed benches in a circular orchestra paved with grass and surrounded by a low limestone wall. The raised stage featured wings formed by evergreens and columns topped with baskets of stone fruit. During performances, banners and Japanese lanterns were displayed around the theater. Shaw also crafted a sophisticated lighting system with tiers of floodlights and spotlights as well as many of the theater’s props and costumes.

HISTORY OF COMPETITION
In 2013 Ragdale launched an international competition to reinterpret Shaw’s Ring as a temporary, experimental environment. This annual competition provides artists, architects, and designers with the unique opportunity to devise and construct a performance venue and gathering place on the historic Ragdale campus. Each year, Ragdale seeks inventive, large-scale submissions that explore intersections of architecture, sculpture, landscape, design, public art, and performance disciplines.

Submitted by Ragdale, a non-profit artists’ residency located on architect Howard Van Doren Shaw’s historic country estate in Lake Forest that hosts nearly 200 writers and artists each year, making it the one of the largest interdisciplinary artist residencies in the country.