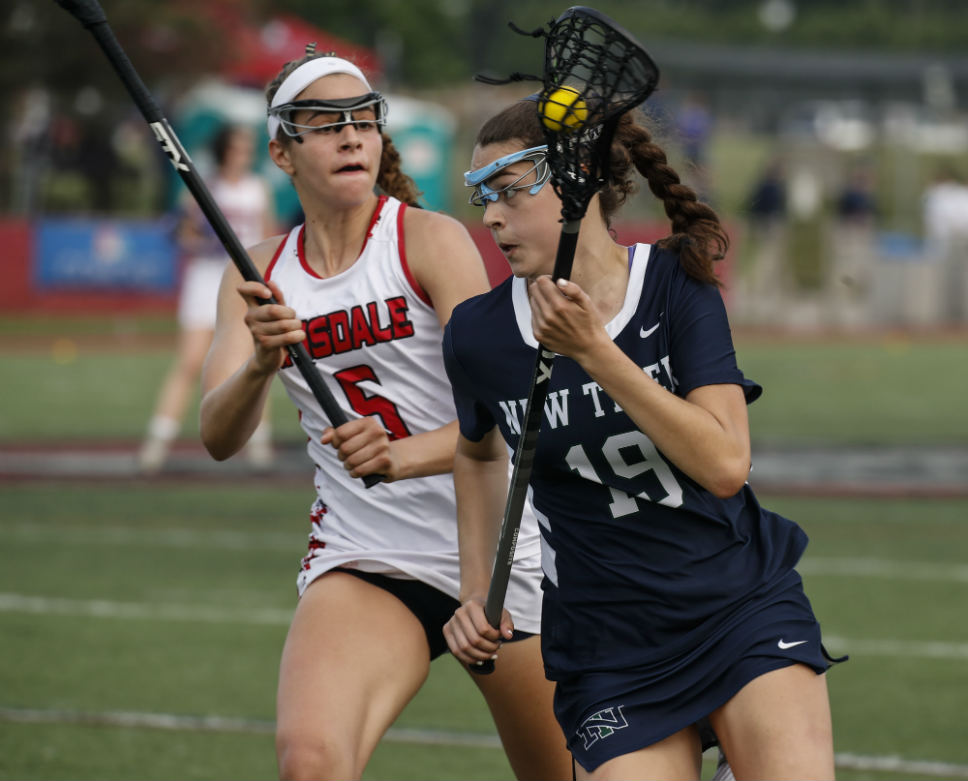 Lucy Murray of the Trevians (No. 19) drives with the ball in the state final against Hinsdale Central. PHOTOGRAPHY BY JOEL LERNER

“Hinsdale Central’s pressure in the midfield caused a lot of turnovers,” the 5-foot-10 Murray said the day after she poured in six goals and had four assists in NT’s 14-3 defeat of Naperville North in a state semifinal at HCHS.

“They also won a lot of draws and capitalized often, and their time of possession hurt us,” the 2017 All-American added. “Possession is such a key thing in lacrosse. Tough loss. Unfortunate for us. But it was an honor to play in this game.”

“[Hinsdale Central] got to a lot of groundballs, played with a lot of poise and had a great game plan,” said Trevians coach Pete Collins, whose crew had entered the championship game on an 11-game winning streak, during which it averaged 15.5 goals per game. “We played a lot of ‘D’ in the first half.”

NT got a lot of “0” from Murray this spring. The Dartmouth recruit, a savvy and tireless and tough player, paced her team in goals (83) and assists (52).

“Lucy gave us a lift with her play when we needed one,” Meier said. “We relied on her. She made the right moves. She was a great attacker who found the net so well.”

“She was a draw-control specialist,” Lucy Murray recalled.

What Spencer will be, beginning with the 2020 women’s lacrosse season at the college level: Murray’s Big Green coach at Dartmouth.

But Murray gets to play prep lacrosse with Meier (33 goals, 27 assists in ’18) for one more season, and that thought made Murray smile after the state title game last weekend.

“Charley,” Murray said, “is such an amazing all-around player, from one end of the field to the other. Unreal; she is unreal. Gets every ball, gets every interception, makes great cuts.”

Trevians senior and University of Massachusetts-Amherst-bound Courtney Kaskey scored NT’s second goal against HC last weekend, bouncing a shot past Red Devils senior goalie Kelsie Chisholm at 21:26 of the first half to tie it at 1.

“A good blend of girls,” Collins said of his state runner-up squad. “Lot of fun. The kids cared about their teammates, and every day they made it fun for me.

“I enjoyed being around them and coaching them.” 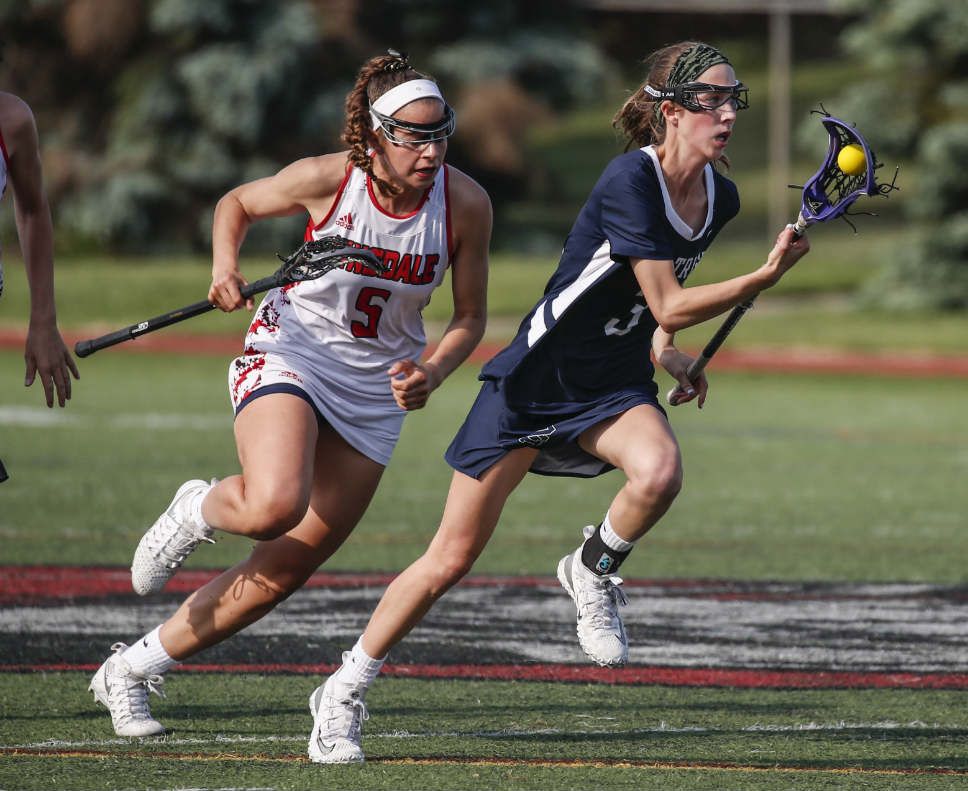 Charley Meier of the Trevians starts a rush during the state final. PHOTOGRAPHY BY JOEL LERNER 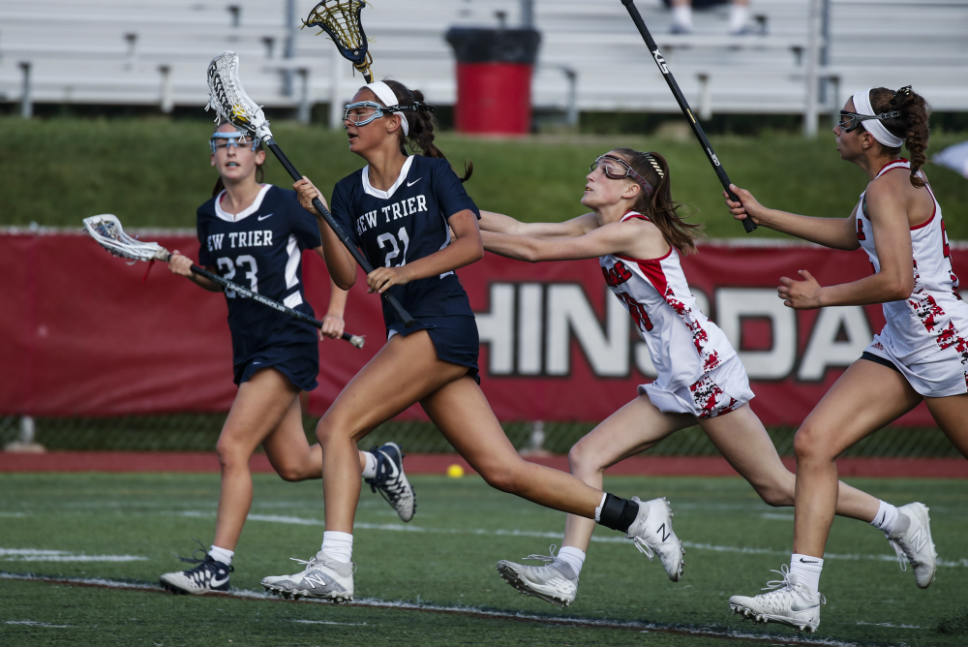 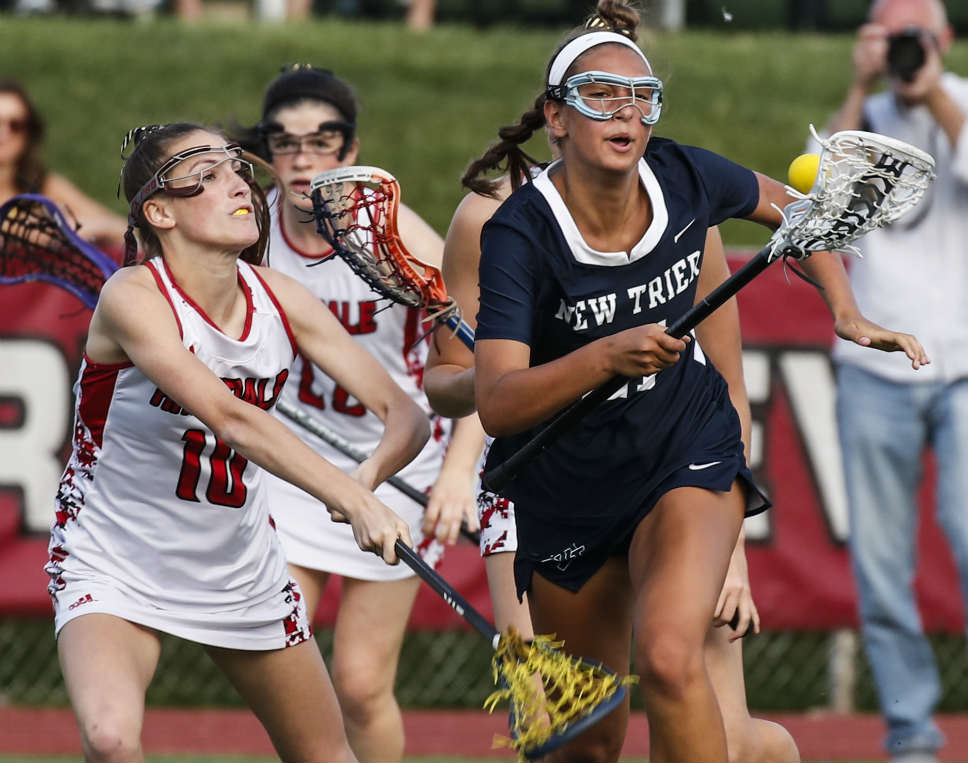 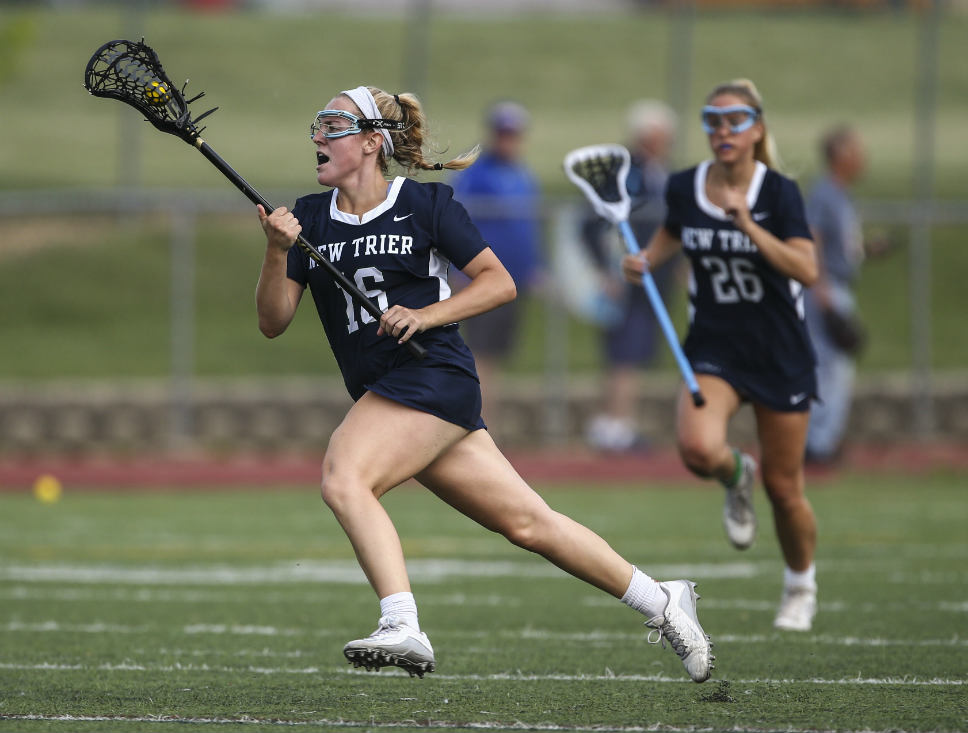 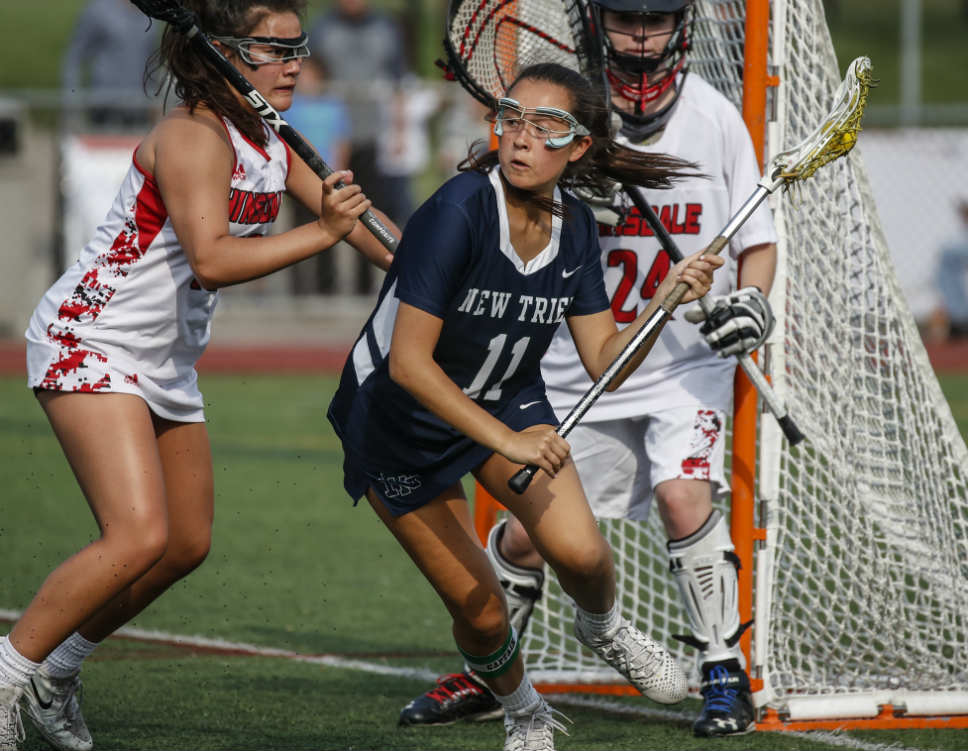 Sophia King of the Trevians deals with a Hinsdale Central defender. PHOTOGRAPHY BY JOEL LERNER 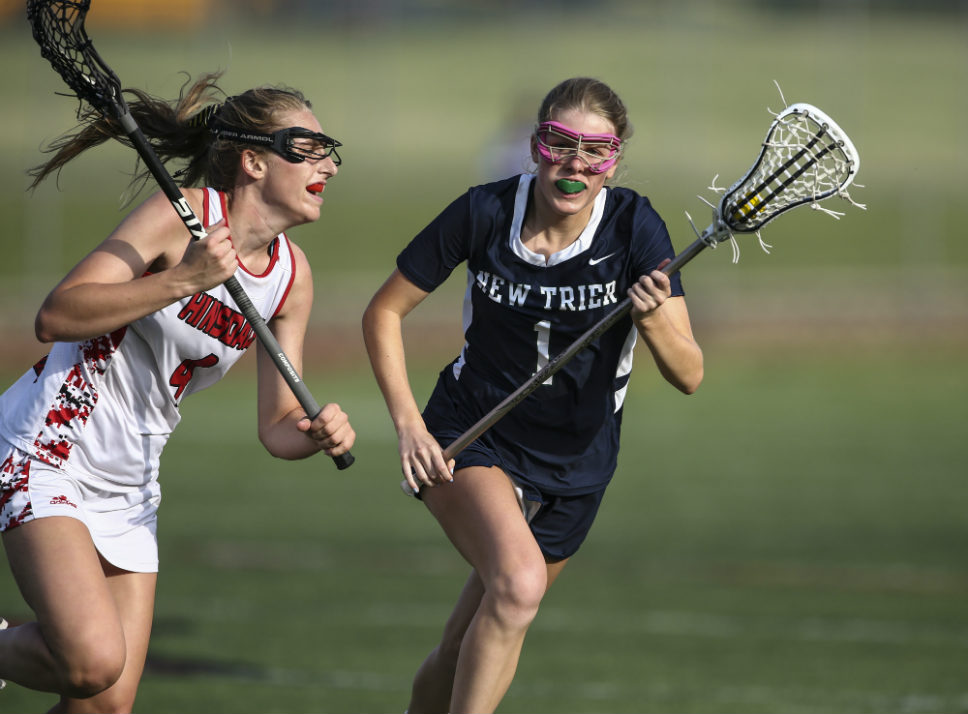 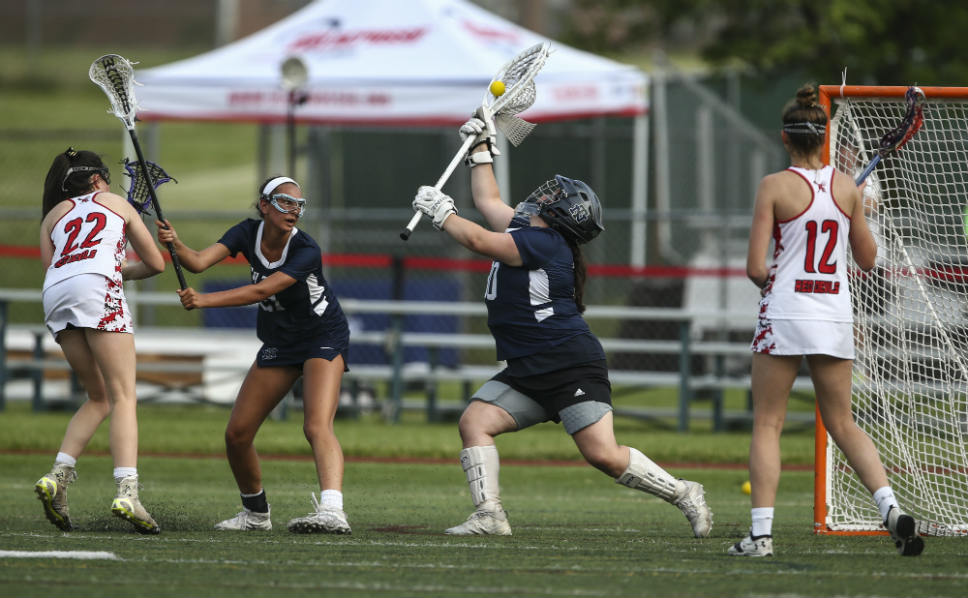 Goalie Sabrina Rice reaches to make a high save. PHOTOGRAPHY BY JOEL LERNER