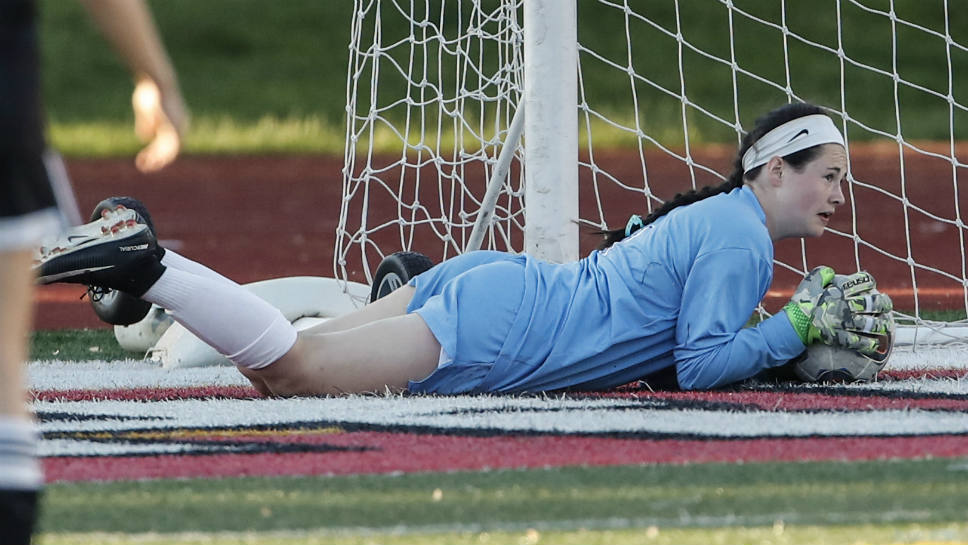 New Trier junior goalkeeper Meghan Dwyer, seen here making a save in the state semifinal against Andrew High School, came up with three PK saves in her team’s 2-1 loss to Barrington in the Class 3A state title game at North Central College on June 2. PHOTOGRAPHY BY JOEL LERNER

In the waning seconds of the second 10-minute overtime period, New Trier goalkeeper Meghan Dwyer had a strong inkling that it would come down to this.

That soon — and very soon — all eyes would be on her.

The stage was set for Dwyer to take center stage.

“Nerve-racking,” said the Trevians junior. “With about 30 seconds [left in the second OT], I got a pain in my stomach [that the game would come down to penalty kicks].”

Bring on the floodlights.

Shine the beam on her.

And … so much for her freaking out.

Instead, the PK shootout in the Class 3A girls state soccer championship at North Central College in Naperville on June 2 illuminated Dwyer’s amazing and uncanny abilities.

One of NT’s hidden gems is hidden no longer.

The understated and unheralded Dwyer made a hat-trick full of saves in the first PK session. She “guessed right” and made three diving stops.

Her effort was resplendent.

“Tough one for our kids,” said New Trier head coach Jim Burnside, who has guided the Trevians to six state titles and three state runner-up finishes during his illustrious coaching career (508 wins, 74 losses, 32 ties). “Our girls did everything possible to win.

“It was a wonderful season,” he added. “One of the greatest groups of kids that I’ve ever coached. They’re high class. They match so many of the other great teams we’ve had.”

“Meghan played great, and she has played great for us all season,” said Burnside. “She’s a great athlete, and she reads the game well.”

Ten minutes after the game, New Trier senior Nicole Kaspi shook her head and smiled. She was amazed by Dwyer’s work.

“Her ability to guess right was incredible,” said Kaspi, an all-sectional honoree who will play college soccer at the University of Chicago. “She was right place, right time.

“She did big things for us all year,” she added.

No doubt, the Trevians (24-1-2) went into the shootout session with some confidence — especially with Dwyer wearing her poker face and staring down opposing shooters.

Earlier this season, in a semifinal game at the Naperville Invitational, Dwyer came up with two saves in a PK shootout win over Neuqua Valley.

Her stops on Saturday night came against Barrington’s Michayla Herr, Madi Rosen and Tina Teik. She made sliding saves to her left twice and went to her right once.

“I was pretty hyped up, when I saved the first one,” said Dwyer, fighting back tears. “I got even more excited after the second one. And then, after the third one, I thought for sure that we were going to win.”

But her counterpart, Barrington’s Samantha Schmitz, also was up to the task. Like Dwyer, she allowed only two shots — one by Kaspi and one by Emma Weaver — to reach the back of the net in the first PK session.

The two goalies also stood out in regulation.

Schmitz made some solid stops early. But she could do nothing about stopping a clever unassisted goal by Kaspi with 13:41 left in the first half.

Kaspi, who can be a magician with the ball, used a deke move to beat a defender and then caught Schmitz in no woman’s land to give the Trevians a 1-0 advantage.

“Had to score … for the team,” said Kaspi, who finished the season with a team-high 18 goals to go along with six assists.

Barrington (20-3-2) tallied the equalizer with 36:11 left in the second half, when Prell got behind the NT defense, accelerated downfield and drilled a shot past a diving Dwyer to make it a 1-1 game.

Before picking herself off the ground, she pounded the turf several times with her right fist.

She didn’t stay agitated for long. After staving off three corner kicks in a four-minute span, Dwyer arguably came up with the “play of the game” by aggressively coming out of the net and stopping a point-blank bullet by Teik with exactly 11:00 left to play.

“Had to make up for the goal I gave up,” said Dwyer, a first-year varsity starter. “Wanted to get one back.”

Notable: New Trier advanced to the championship game with a convincing 4-0 victory over Andrew High School in a state semifinal game at North Central on June 1 (see online story at DailyNorthShore.com). The Thunderbolts (21-5) got out to a tough start. They fell behind 1-0 in the second minute of the game, when they scored an own goal. The Trevians took over from there on goals by All-American Sydney Parker, Nell Martin and Whitney Hoban. Sophomore all-stater Emma Weaver was credited with three assists, while goalie Meghan Dwyer earned the shutout with the help of defenders Parker, Caroline Iserloth, Meredith Nassar and Josie Crumley along with midfielders Hoban, Weaver and Lily Conley. … Parker, a DePaul University recruit, finished the season with 17 goals and three assists. Weaver, who will play at Villanova, ended up with 15 goals and 22 assists. Senior forward Victoria Flannagan produced five goals and two assists, while Hoban, who will play at Trinity College in Connecticut, had seven goals and nine assists. … NT’s all-CSL South picks included Conley, Dwyer, Hoban, Iserloth, Nasser and Martin.