WINNETKA – When School of Saints Faith, Hope and Charity 7th grader Aiden Lee began his science project “Invisible Fluid,” he had a hunch he could create an illusion that a glass rod submerged in liquid was invisible.

Call it a hunch, or in scientific terms, a hypothesis that turned out to be true and ultimately led Lee to claim second prize in a statewide science fair at Bradley University in Peoria, where he competed against more than 1,000 students in 7th to 12th grade. Lee originally created the science experiment with a fellow student, Tommy Enrietto, who wasn’t able to attend the science fair

The experiment involved filling three glass beakers half way with light corn syrup, vegetable oil and baby oil, and then dipping a glass rod into each beaker, Lee said. Lee was exploring which liquid would allow a glass rod to appear invisible due to light refraction angles of the glass and liquids. He hypothesized that the liquid with the closest index of refraction to the glass beaker could make the glass rod appear invisible, and he was proven correct. The beaker with vegetable oil made the glass rod appear nearly invisible, after 10 girls and 10 boys viewed the experiment.

Lee said he has always been interested in invisibility — having seen plenty of special effects in movies — and wanted to simulate invisibility in real life. After a lot of research, Lee and his partner combined two experiments that they had read about to create “Invisible Fluid.” They also spent a lot of time choosing the appropriate liquids, going through about 10 different liquids before settling on vegetable oil, baby oil and corn syrup.

Going to a large science fair was a new challenge for Lee. “It was kind of intimidating when you see the magnitude of it,” he said. The fair had rows and rows of tables where students set up their science projects.

This project was a first for him as well — Lee had never actually participated in a science fair before — and he spent a lot of time preparing. Lee carefully prepared an eye-popping board, as well as a speech that he would have to give to the judges who visited his table. After going over his research fastidiously, and reading his speech repeatedly to his mom, Lee was able to answer all of the judge’s questions.

While the experience was challenging, overall Lee found it to be fun and rewarding.

“I like researching topics and really going in-depth on a certain topic and not rushing through,” he said. Lee also enjoyed completing an experiment where he had the opportunity to test his hypothesis and observe the results like a real scientist.

Lee has always loved science and math, and he is particularly interested in physics.

“I’ve always liked science, it has always intrigued me. I like math as well and how they are tied together,” he said. While he doesn’t have any ideas yet for another science project, Lee is already thinking about competing at fairs in high school where he can continue to explore his interest in science.

“I love physics and how it affects everything in our life,” Lee said. 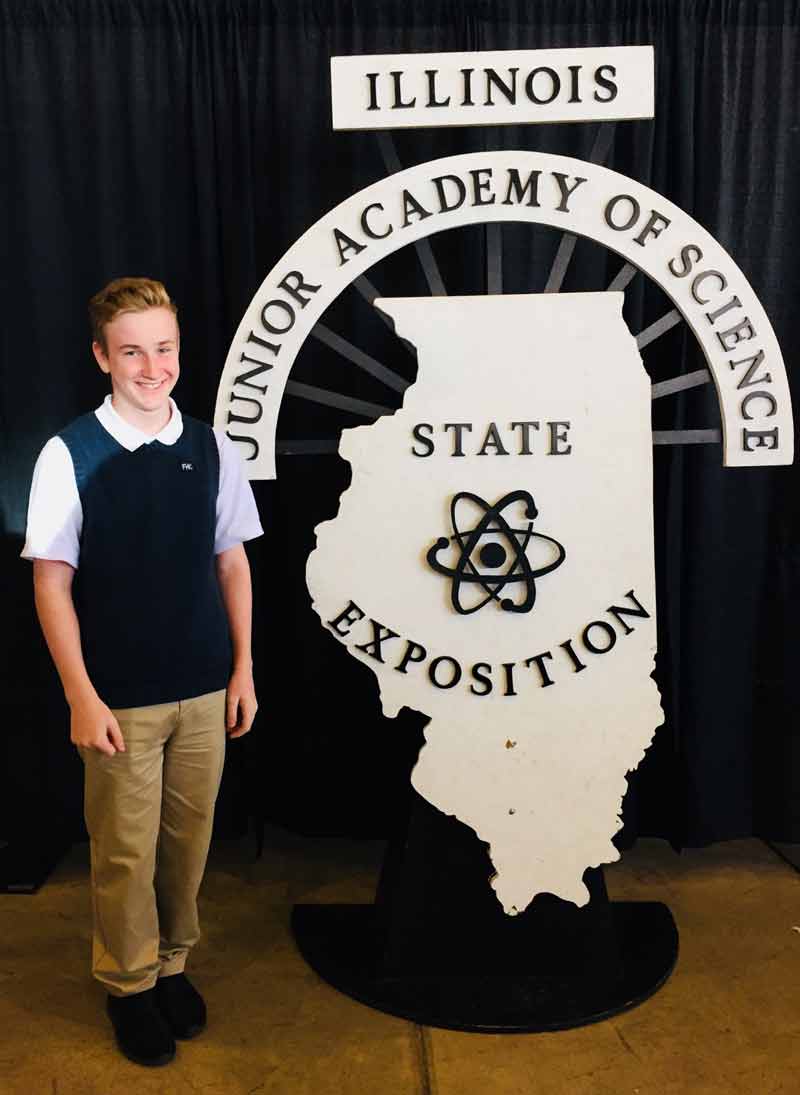 Aidan Lee at the Junior Academy of Sciences state fair.