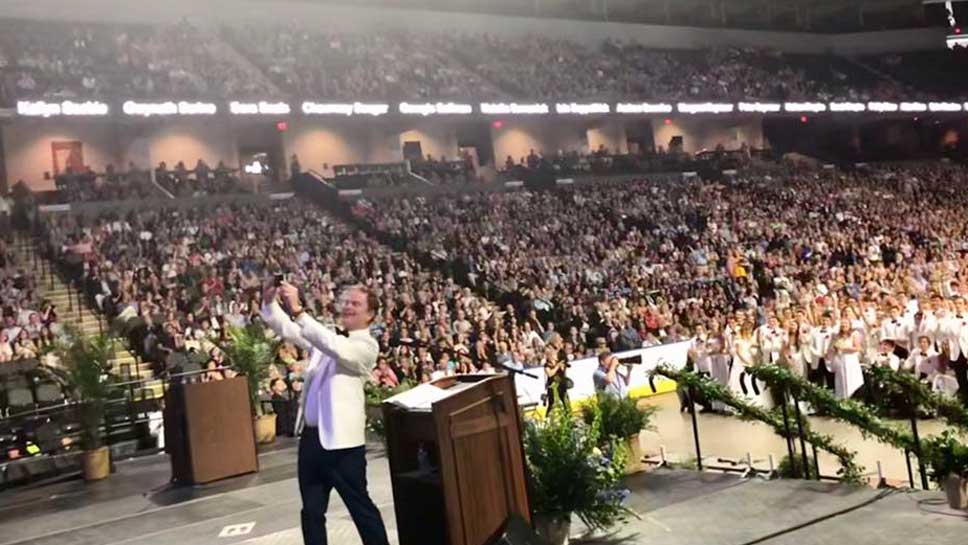 Rainn Wilson in a selfie that he took while addressing New Trier Township High School’s (his alma mater) Class of 2018.
PHOTOGRAPHY FROM RAINN WILSON’S TWITTER FEED

New Trier Township High School alumnus Rainn Wilson, known to millions as Dwight K. Schrute on the U.S. version of The Office, implored his alma mater’s Class of 2018 to be change agents in the world and to use the privilege of growing up on the North Shore and attending a school “with a dance wing, a full orchestra, eight theater productions a year and even a radio station” not to seek personal comfort and status but to help others.

Wilson graduated from New Trier in 1984 and became famous as the “assistant (to the) regional manager” of Dunder Mifflin, a fictional paper distribution company in Scranton, Pennsylvania, that was the center of The Office during its 2005 to 2013 run on NBC. He also has starred in many movies.

In his commencement speech, Wilson spoke of his “hippie, Bohemian,
Bahá’í parents,” who moved from Seattle to work at the Bahá’í National Center in Wilmette, where he eventually got his first job — as a security guard.

He spoke of the influence New Trier and its teachers had on his life, specifically Raissa Landor, who taught Great Books, and drama instructors Michael Routenberg, who died in 2006, and Suzanne Adams. Landor and Adams are now retired.

Wilson said: “But my life was changed by this school not because of the facilities, although they are state of the art, not by the philosophy of the school, as comprehensive as it is, but because New Trier attracted some fierce, wonderful teachers that pushed us all to be our very best, and to think and feel as deeply as possible.”

Of Landor, he said: She “coaxed and urged and inspired us to look at the profound questions of philosophy and spirituality. She spoke with inspiration as we read Plato, Rousseau, Kant and the Bible, examining all of them for the ongoing human conversion that has been happening since we lived in caves: ‘Why are we here? Is there a God? How do we find the truth? Is there fate or free will?’ And finally, ‘What’s love got to do, got to do with it?’ “

Of Adams, he said she inspired him to pursue acting, but not until after first living:

“Ms. Suzanne Adams was a true inspiration for me, as an aspiring young artist. I started doing plays at New Trier, and found I was good at it and could make people laugh. I was incredibly insecure, and I had never met anyone in my life that had ever received a paycheck for a creating a work of art. … So it was a tremendous act of courage on my part as a skinny, pimply 17-year-old to go into Ms. Adams’ office and say to her, to implore her, do you think maybe one day, possibly, I could potentially, maybe, be an actor? And Ms. Adams’ reply was “Oh yes! Absolutely you must try! But first you must travel the world, and fall in love, and read lots of books and go to college and study everything you could possibly study. You must live a rich, wild and luscious, beautiful life!”

In an email to The North Shore Weekend, Adams said her memory differed somewhat: “I don’t remember ‘skinny and pimply.’ I do remember Intelligent, Sensitive and Open. I cast him as Christian in Cyrano de Bergerac, a character noted for his beauty – no mention in the script of pimples. What I saw in Rainn as a young actor was his willingness to use himself in the service of an art form.”

She added: “I loved Rainn’s talk, as I have loved seeing what he’s been doing with his life: Lide, an arts and literacy organization Rainn and his wife founded in Haiti to help girls; Soulpancake; The Office, and most recently The Doppleganger with Steppenwolf. I’m delighted if I played any role in cheering him on along the way. Rainn is a pretty darn good example of New Trier’s aspiration ‘To commit minds to inquiry, hearts to compassion, and lives to the service of humanity,’ which is part of what Rainn underscored in his speech.”

In his address to the Class of 2018, Wilson also spoke frankly about white privilege:

“But I want to say something about this privilege. This is not something I ever want you to feel bad about. What privilege means is that we have an opportunity. We come from a life of abundance and our entitlement is not to be entitled, not to be superior, but to acknowledge our privilege and do whatever we can to help those who don’t have it. … We come from abundance and we can use this abundance to help the poor, the subjugated, to make the world a better place. We have an opportunity to create jobs, nonprofits, to help fund arts organizations, help make science make tremendous strides forward, and to use our education for the greater good rather than merely seeking personal comfort and personal status. …

“Not so long ago, it seemed like enough to just simply want a comfortable life—a nice family, a house on the North Shore, to make a living doing something in a career you could at least tolerate, to take care of your immediate family and have a nice life. The mantra for a very long time in America was to be a good person and just don’t hurt anyone else.

“But it’s really not this way anymore, unfortunately. The world is hurting from disunity and injustice, and we need to do more. As you grow on your journey, I beg of you to seek to move beyond comfort, status, material wealth and the care of your immediate family, but to see the world as your immediate family, and your self as a change agent. It is our privilege to be change agents in this world,
to be of maximum love in this world, of maximum service, to make every school on this plant as great as the incredible New Trier High School.”

Wilson closed his speech with a quote from Dwight Kurt Schrute: “If an idiot would do a thing, do not do that thing.”