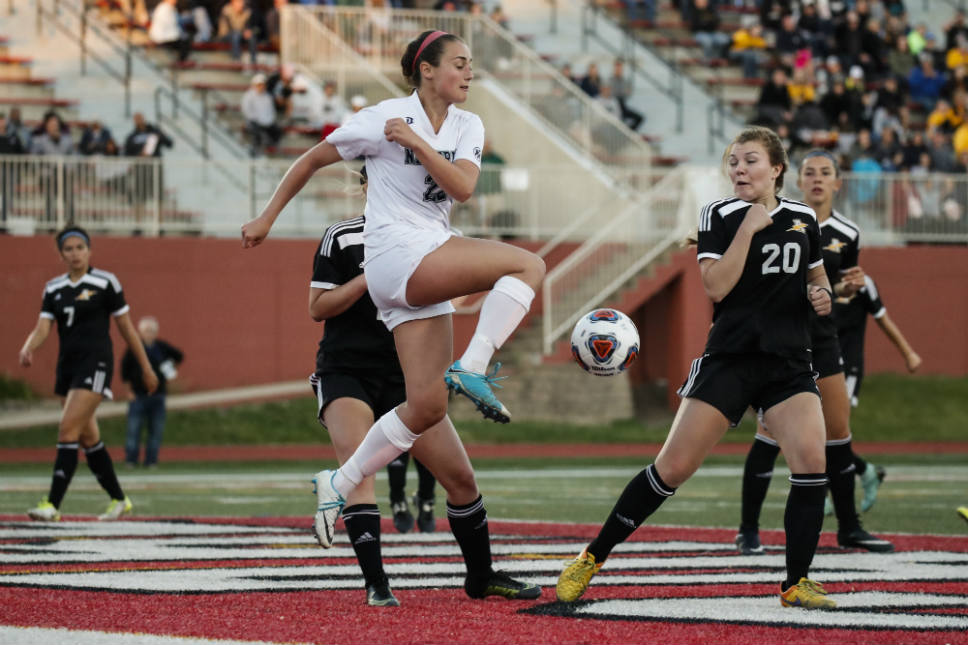 New Trier’s Whitney Hoban takes possession of the ball during play in the state semifinal at North Central College. PHOTOGRAPHY BY JOEL LERNER

Switching Whitney Hoban to center midfield has turned out to be a brilliant coaching move.

The versatile and tenacious New Trier senior has taken to the “new” position. In fact, she’s become extremely adept at it.

Hoban played it to near perfection — again — in NT’s 4-0 victory over Andrew High School in a Class 3A state semifinal game at North Central College in Naperville on June 1.

“She does a great job of shutting down other team’s attacks,” said Trevians head coach Jim Burnside, who will prepare his team for Saturday’s state title game against Barrington (7 p.m.).

“And talk about players who inspire,” the coach added. “Whitney is one of those players. She inspires her coaches — and her teammates.”

Meanwhile, her tendency to drift towards the opposition’s goal probably can’t be helped.

Hoban has a bent — for scoring.

“[Until this year], I’ve always been a forward,” said Hoban, who teams with Caroline Iserloth, Nicole Kaspi and Sydney Parker on her FC United club team. “That’s been my position my entire life.”

So, it was hardly a surprise to see her convert a goal with a well-aimed header off a corner kick by Emma Weaver with 29:15 left in the second half to give New Trier (24-0-2) a 4-0 advantage.

It was Hoban’s seventh goal of the season to go along with nine assists, including two in her team’s 5-1 win over Carmel Catholic in the Evanston Supersectional on May 29.

“With this team, you never know who’s going to score the goals,” Burnside said.

Parker put the Trevians ahead 2-0 with 9:17 left in the first half, when the senior defensive ace rammed in a header off a corner kick by Weaver. It was her 17th goal of the season.

Scoring was a different kind of experience for the exuberant Martin, who usually lines up on the defensive end. It was her first goal of the season to go along with one assist.

“Goals don’t come my way all that often,” said Martin, who made it a 3-0 game. “Victoria [Flannagan] crossed it to me. She did all the work.”

Burnside loved what Martin brought to the field.

“We needed some senior calm out there,” said the coach. “She’s a soccer player. She knew where she needed to be on that play.”

Meanwhile, Andrew (21-5), which defeated a solid Downers Grove North team 2-1 in the Andrew Supersectional on May 29, opened the game on shaky ground.

The Thunderbolts (21-5) fell behind 1-0 in the second minute of the game, when they scored an own goal.

Despite taking three corner kicks in the first 25 minutes of the game, Andrew never really got its offense untracked.

Hoban, who will play college soccer at Trinity College in Hartford, Connecticut, definitely had a say in that. She consistently stymied potential Thunderbolt runs.

Her intensity and work rate is unquestioned. She plays the game in fiery fashion.

Winning balls in the air is what sets her apart.

Notable: The championship game between New Trier and Barrington figures to be a heated battle. NT lost last year’s state title game to the Fillies in a penalty-kick shootout. … Barrington (20-3-2) claimed a 1-0 victory over Naperville North in the other semifinal. … New Trier coach Jim Burnside, who picked up career win No. 508 against Andrew, will be looking for state title No. 7. 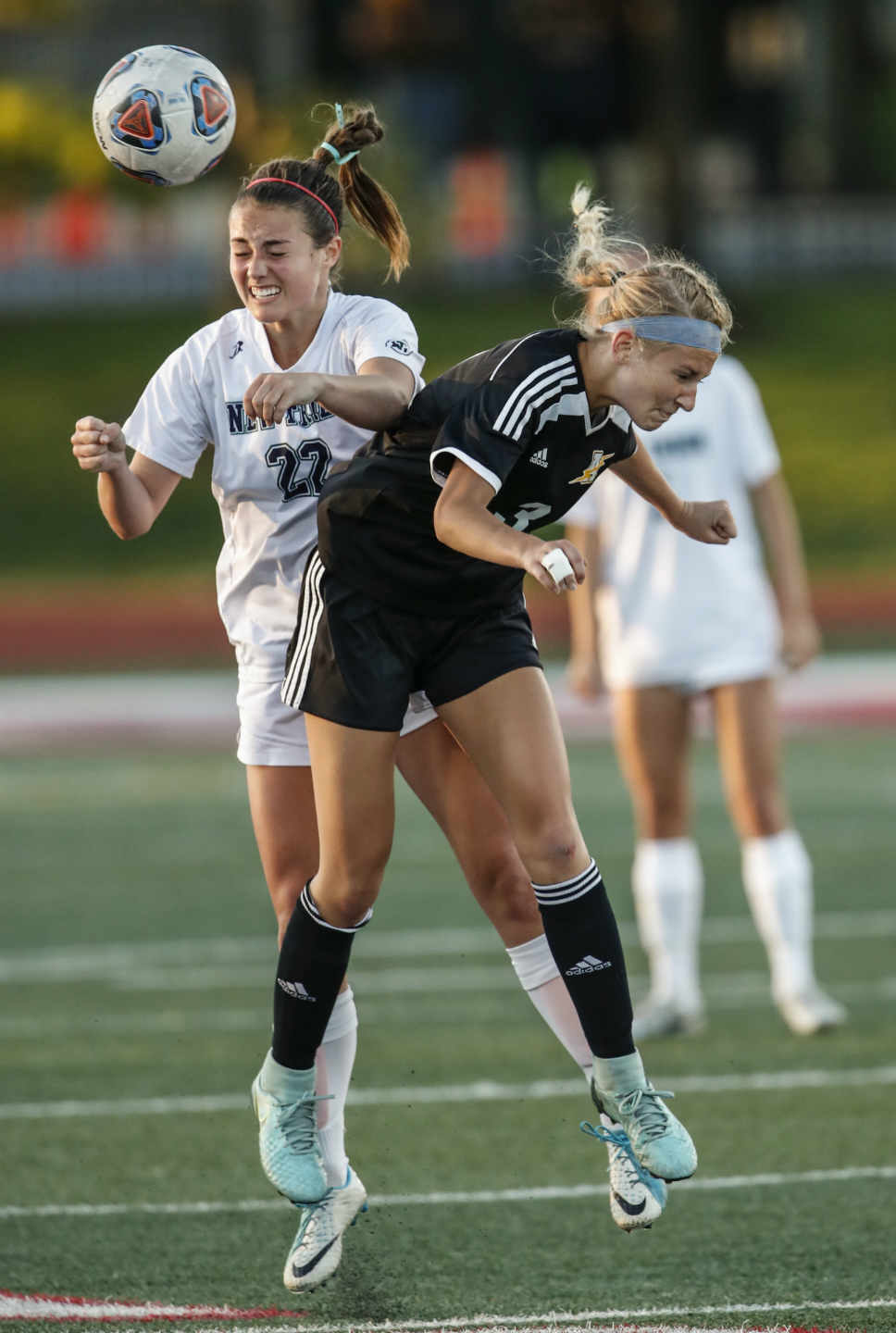 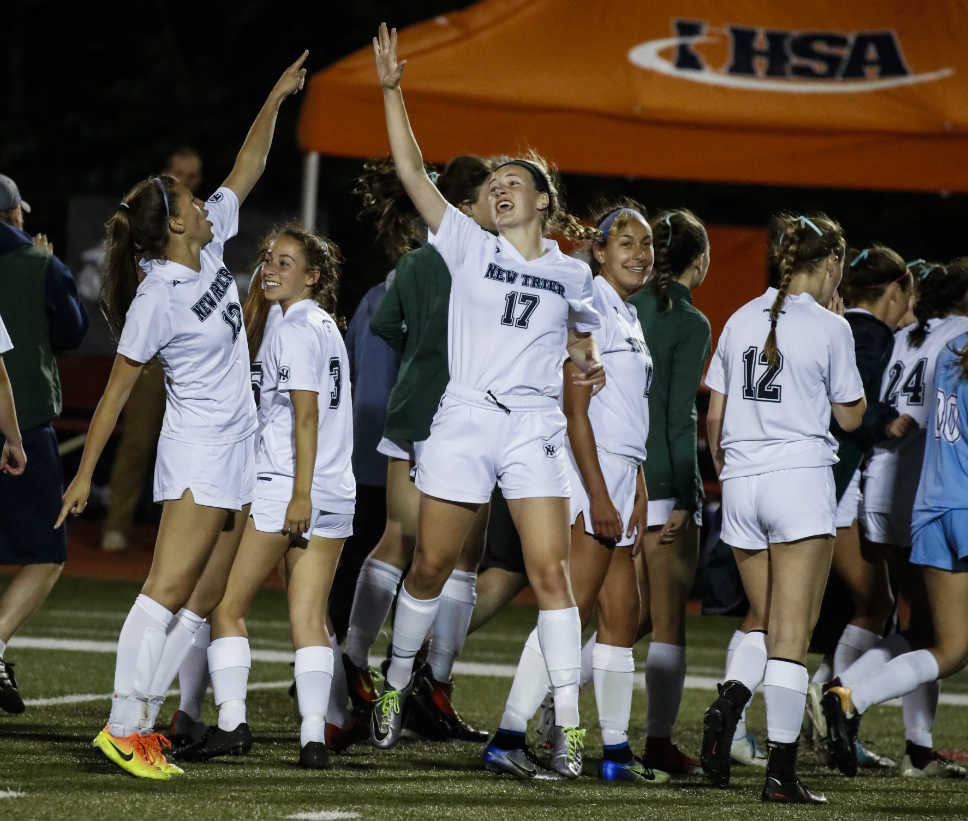 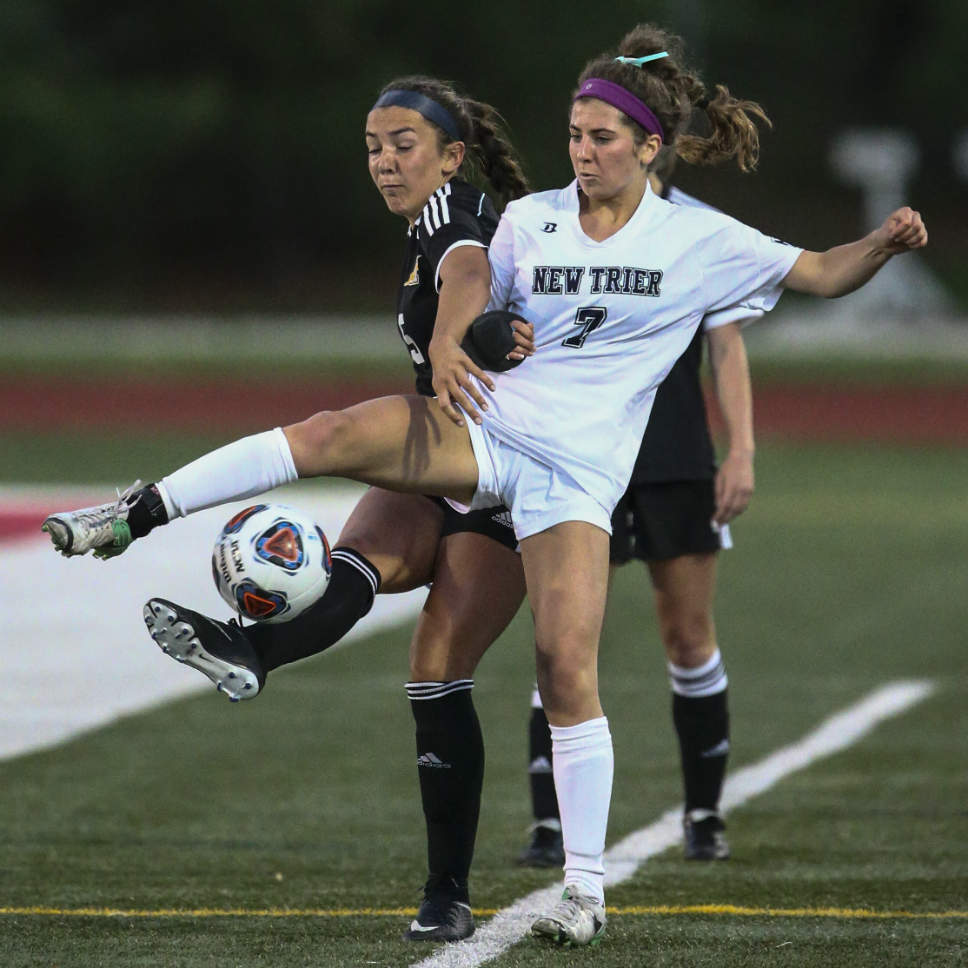 Meredith Nassar of the Trevians (No. 7) battles an Andrew’s Megan O’Neill. PHOTOGRAPHY BY JOEL LERNER 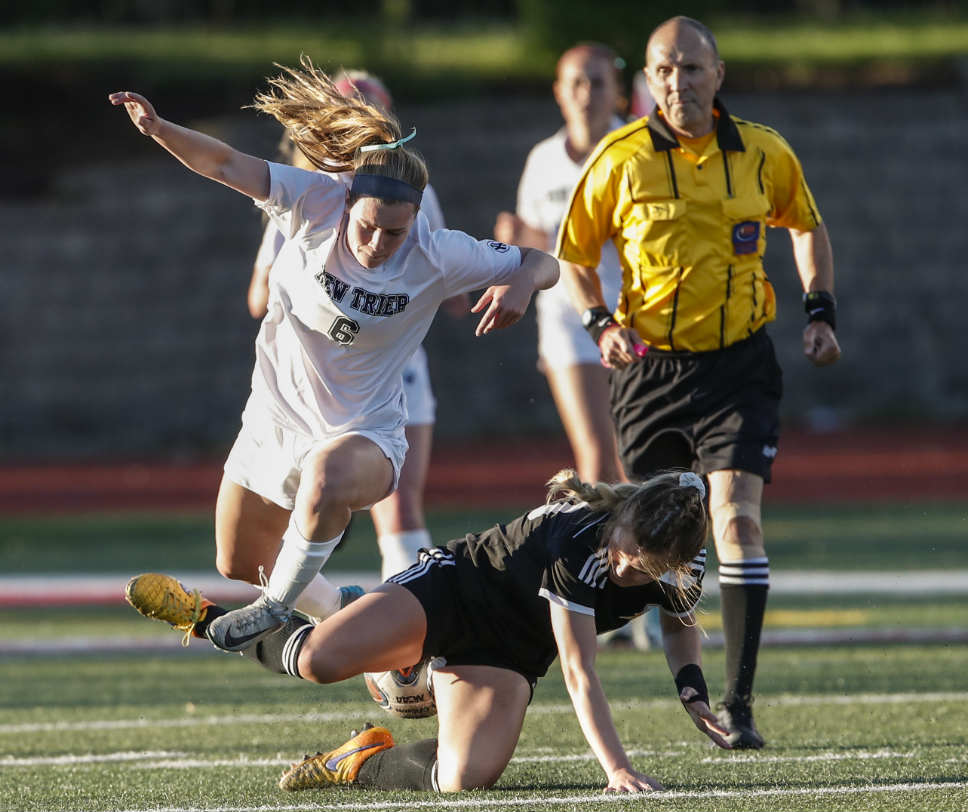 NT’s Lily Conley (No. 6) hurdles over an Andrew player. PHOTOGRAPHY BY JOEL LERNER 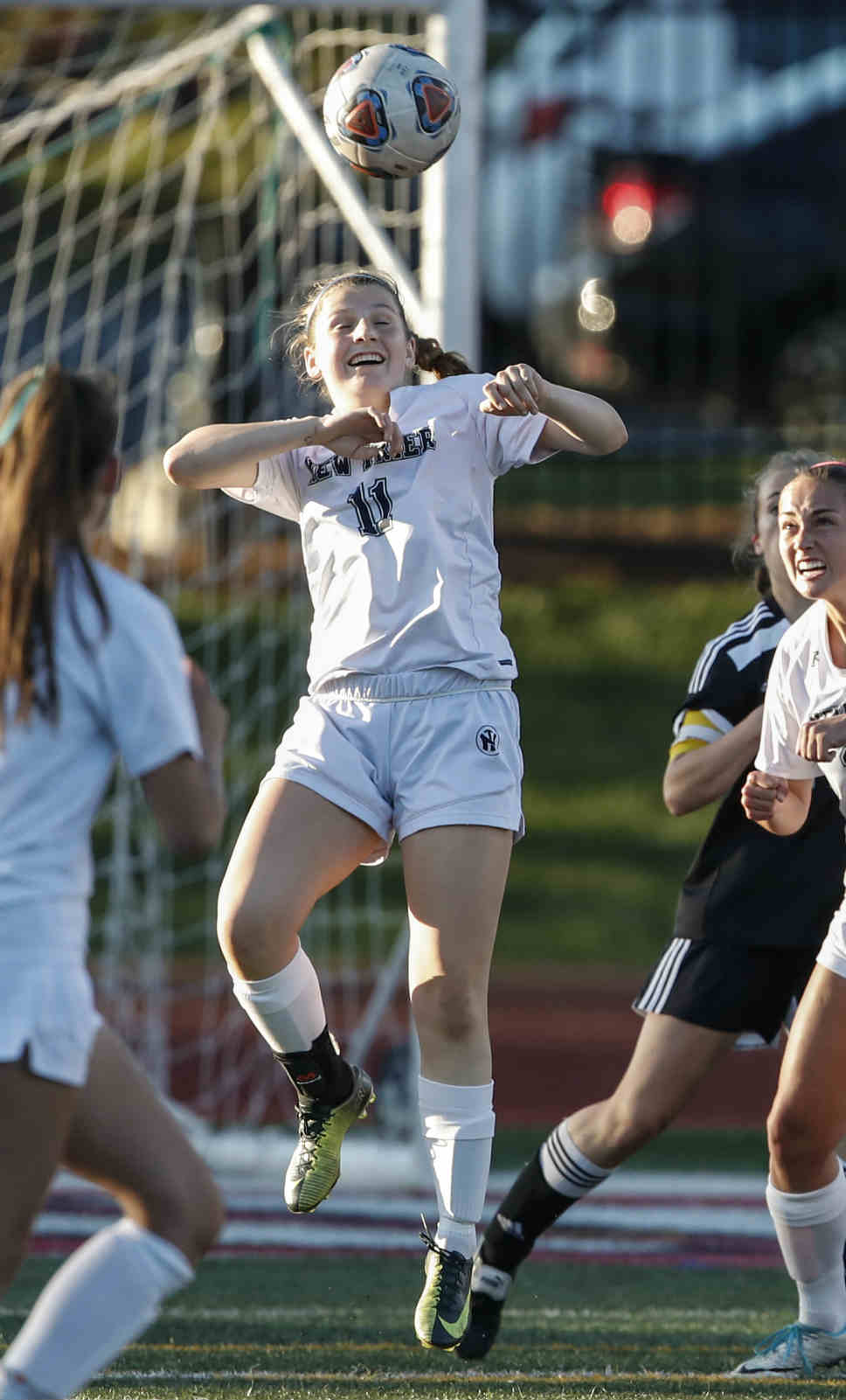 Jose Crumley of the Trevians heads the ball away from the NT goal. PHOTOGRAPHY BY JOEL LERNER 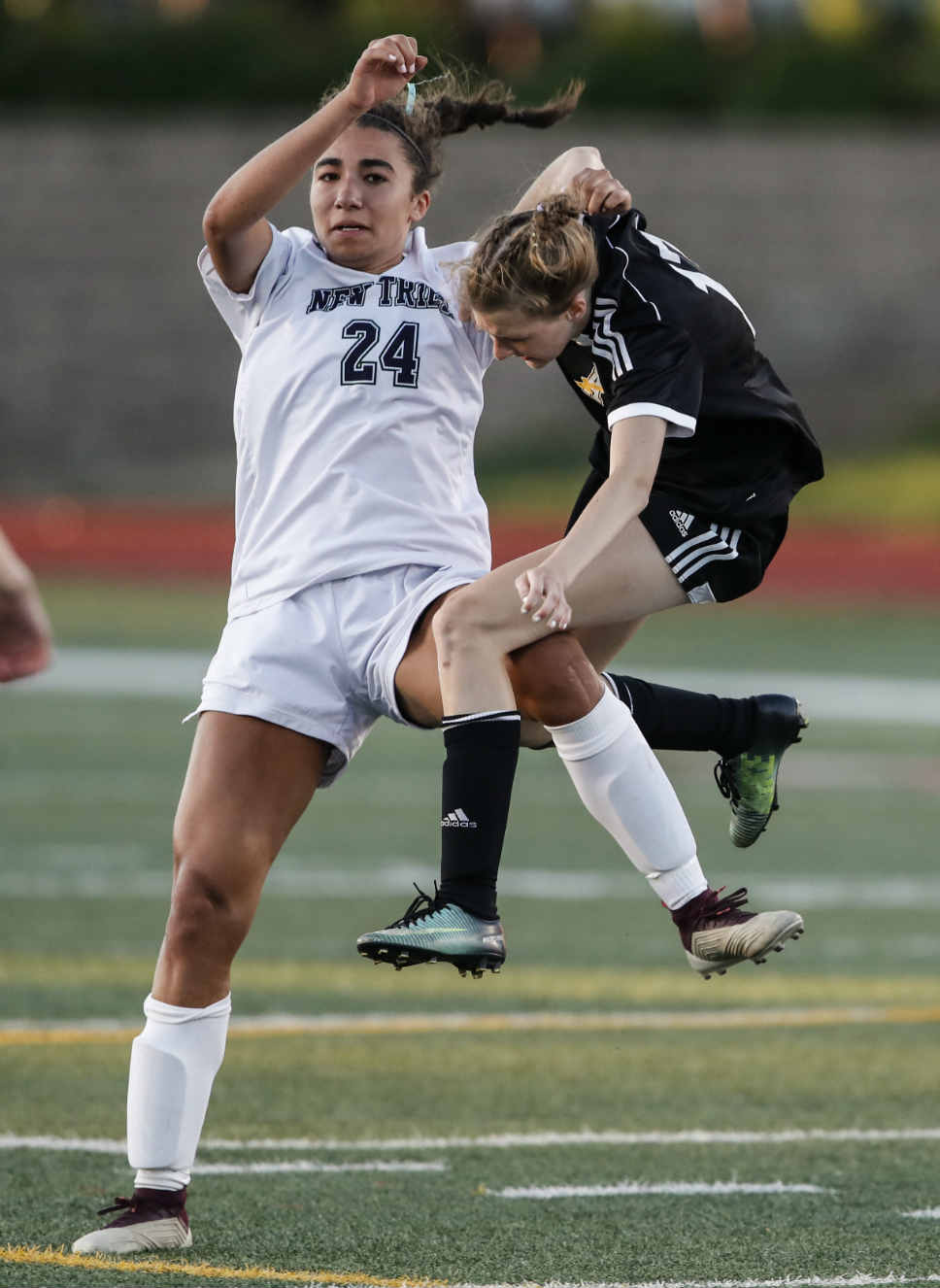 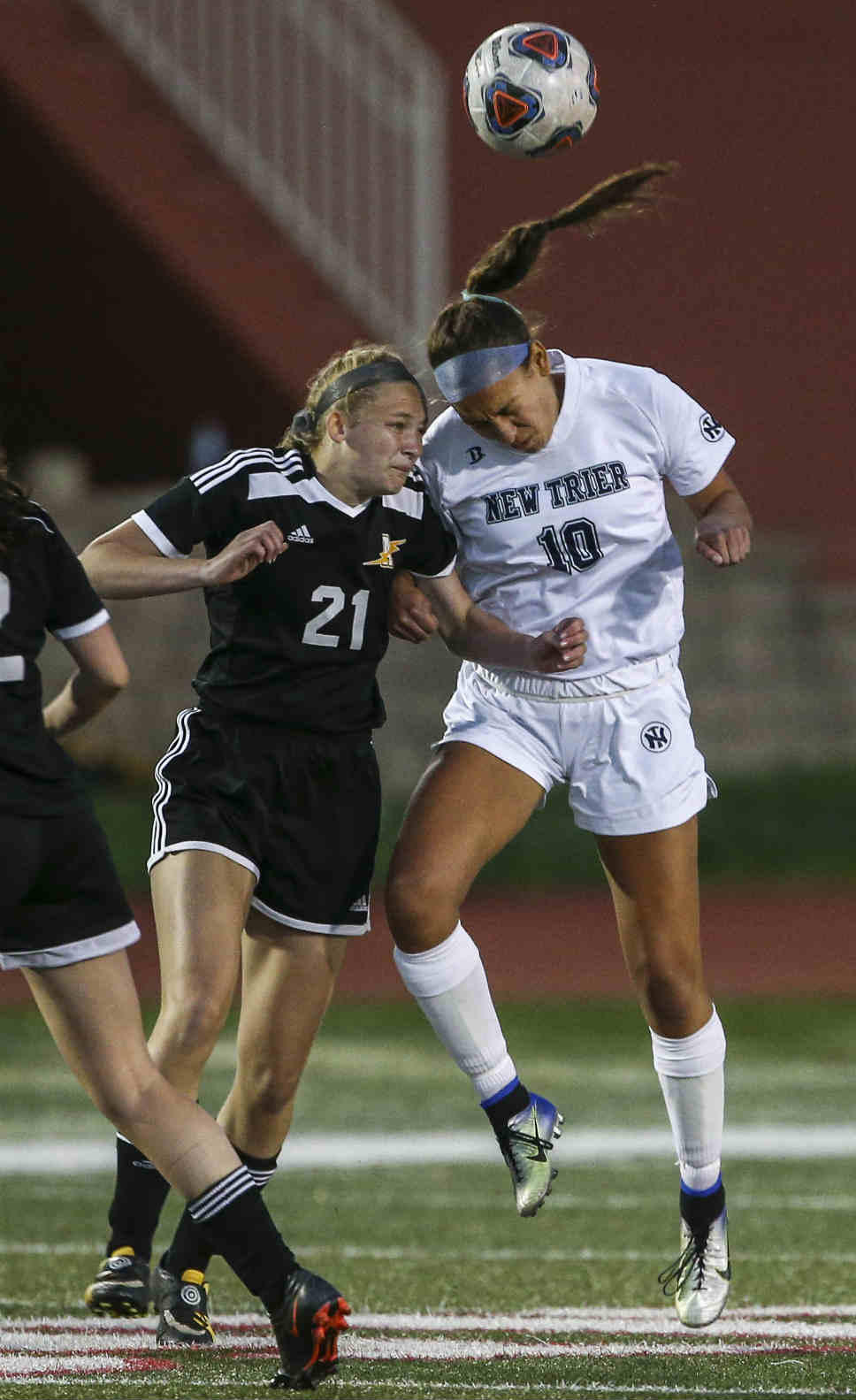 Katie Weix (No. 10) of the Trevians heads the ball away from Andrew’s Makayla More. PHOTOGRAPHY BY JOEL LERNER 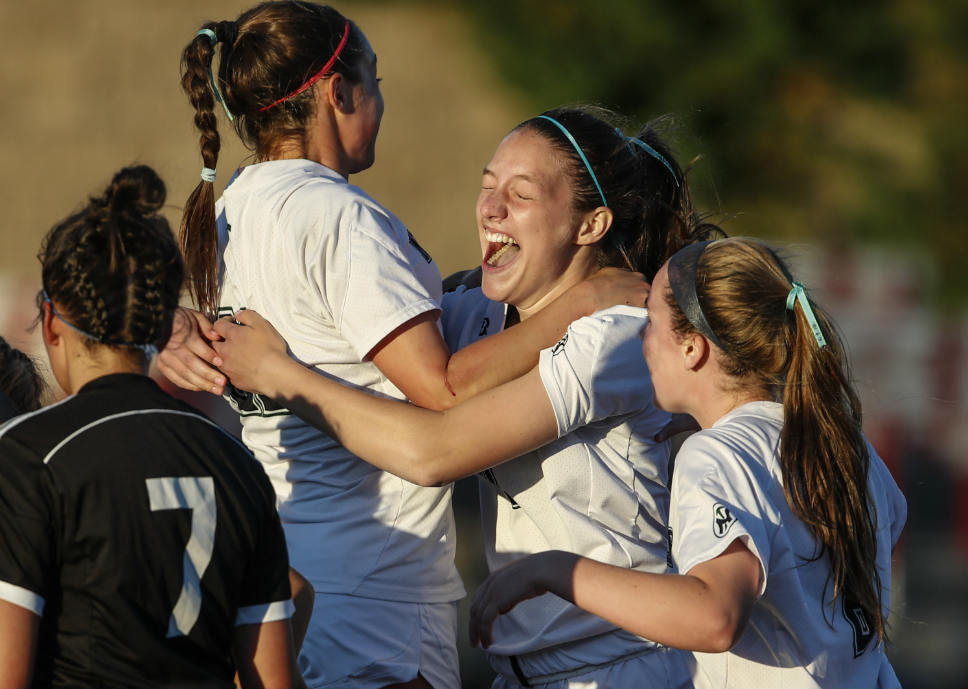 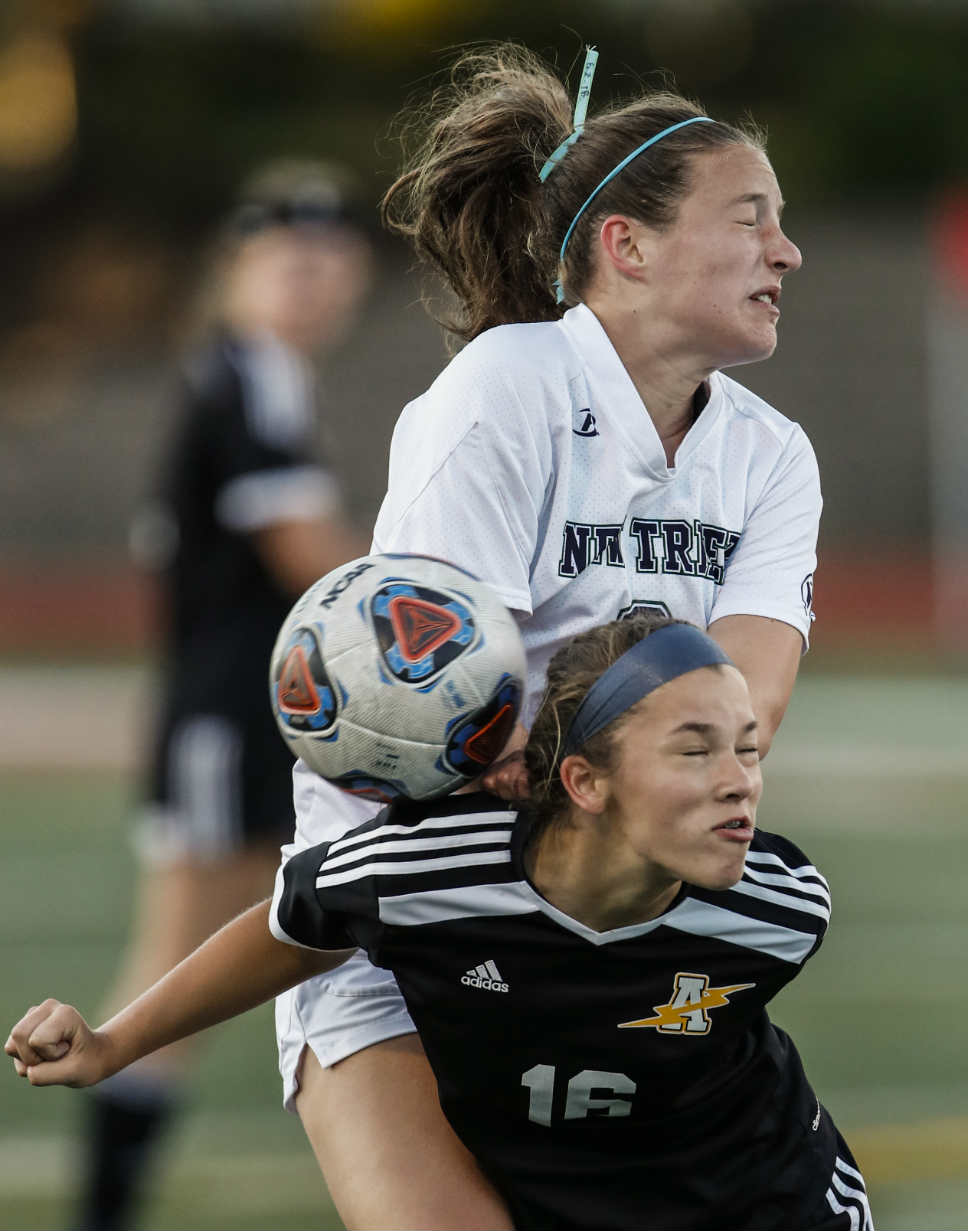