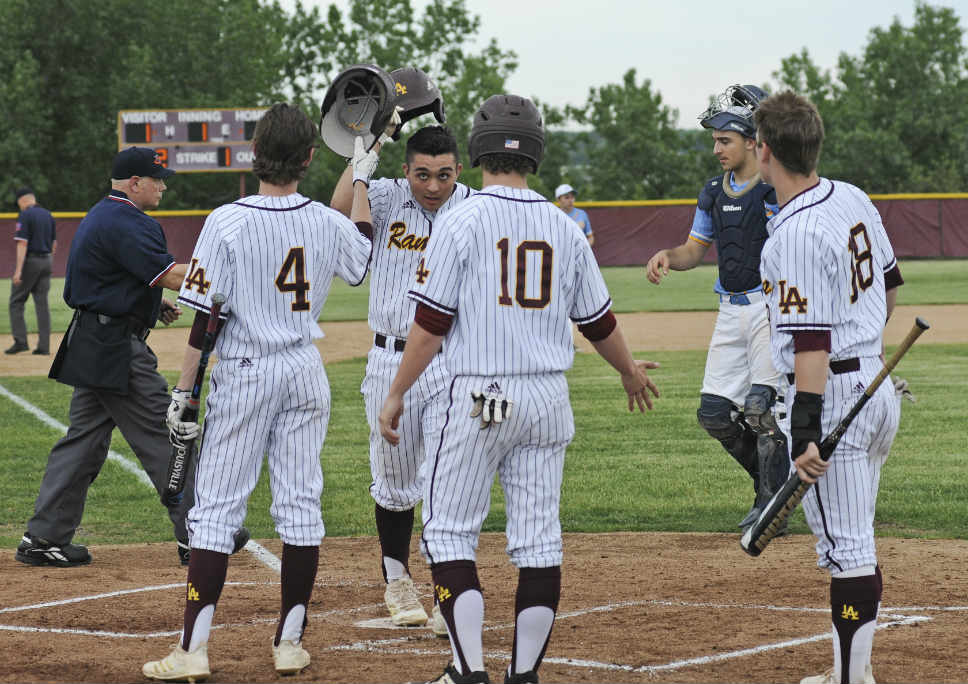 Helmet off, Daniel Hrvojevic gets greeted by Jack Moran, Matthew Raymond and Will Jackson after hitting a three-run homer in the first inning. PHOTOGRAPHY BY GEORGE PFOERTNER

Being a P.O. — pitcher only — just wasn’t cutting it for him.

Thus, following the 2017 baseball season, Loyola Academy’s Daniel Hrvojevic decided it was time to reinvent himself.

Time for a position change.

He left the mound for the greener pastures of first base.

“Talked to coach [Nick Bridich] about it,” said the solidly built 5-foot-11, 205-pound Hrvojevic. “He told me to try first base … nothing was set in stone there.”

After giving up football and focusing solely on baseball, it didn’t take Hrvojevic long to win the starter’s job at first base. He has been a fixture on the right side of the LA infield since Game One of the season.

His bat? It’s got some pop.

Hrvojevic certainly came up huge in LA’s 12-6 win over visiting Maine West in a Class 4A sectional semifinal at Munz, a suspended game which was completed on May 31.

“I went up there with open mind, a clear head,” said Hrvojevic, who cranked out a slider.

He got it all.

And so did many others wearing the Loyola pinstripes.

The Ramblers also banged out five doubles and one triple.

Bridich loved the thump — especially since it came from up and down the order.

“Our hitters really handled themselves well,” he said. “I’m happy with the balance of our lineup.”

Torain was the igniter. After blasting a home run in the bottom of the first, he added a leadoff triple in the second and an RBI double in the third.

The senior right-fielder made a bid to hit for the cycle. But he grounded into a fielder’s choice in the fifth and was retired on a hot grounder to shortstop in the sixth.

Jackson nearly matched Torain. After hitting a two-run ground-rule double in the first inning, he went yard in the third inning.

Vrbancic legged out an infield hit in the fourth.

The senior backstop was even more excited with his ringing bases-loaded, ground-rule double down the left-field line in the sixth.

“It was awesome to get those runs in for us,” Vrbancic said. “You live for that.”

Moran not only played solid defense, but the No. 8 hitter also went 3-for-4 with a pair of doubles.

And, how about LA’s No. 9 hitter: Mejia. The left-handed hitting senior third baseman hit a rope over the right-center fence. It was gone in an instant.

“I just went up there looking to hit the ball hard somewhere,” said Mejia. “Hit it hard and see where it goes.”

Maine West also came up with some pretty good offense. Justin Schroller ripped a solo homer in the first, while Emmett Olson drilled a two-run shot in the seventh.

LA (21-9-1) used three pitchers in the contest: starter Joe McKermitt and relievers Jake Novak and Jackson. Novak worked innings No. 4, 5 and 6 to earn the win. He had five Ks in the three innings.

The Ramblers will face Evanston in the sectional title game at Munz on June 2 at 10 a.m.

The Wildkits beat Lane Tech 9-7 in the other semifinal. 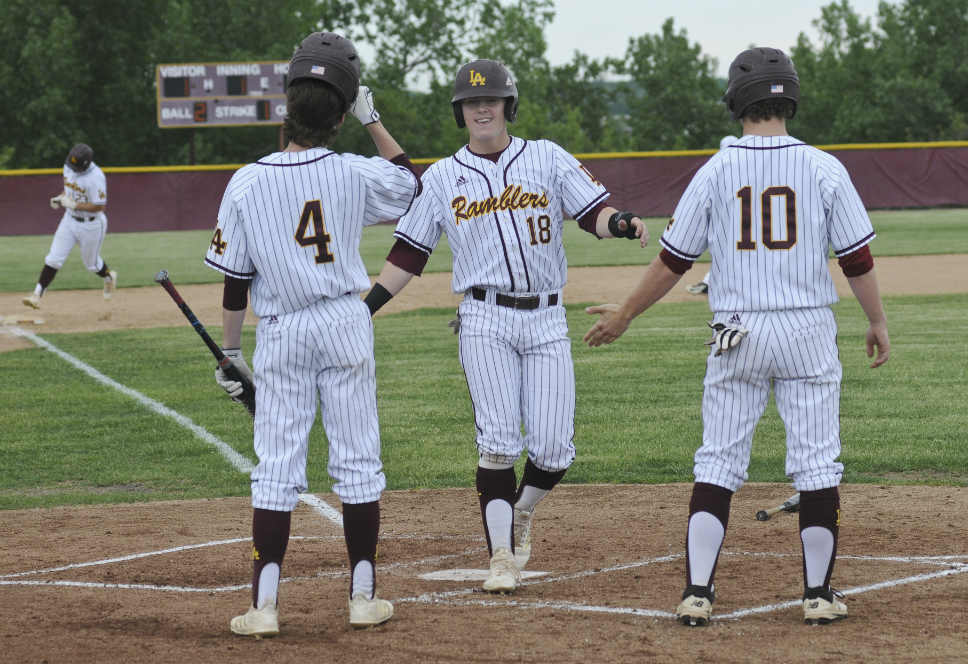 Will Jackson (No. 18) crosses the plate, while Daniel Hrvojevic circles the bases. PHOTOGRAPHY BY GEORGE PFOERTNER 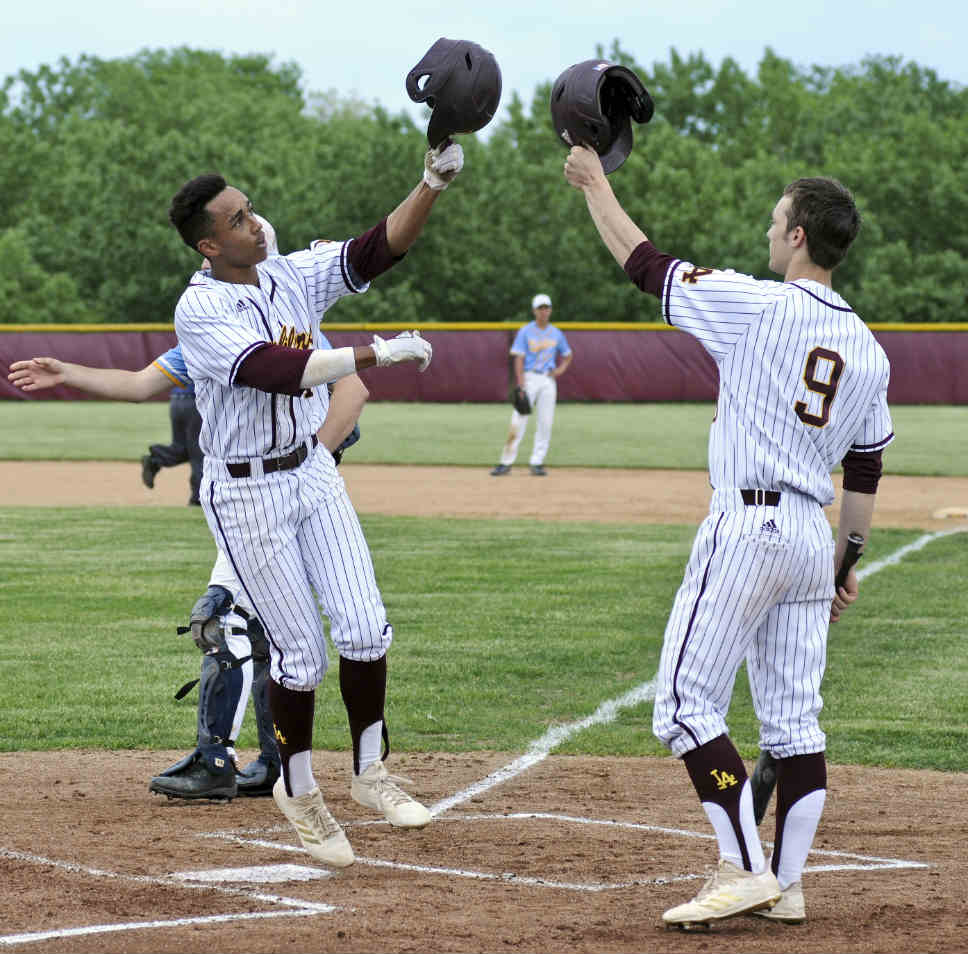 Trey Torain of the Ramblers taps helmets with Henry Haracz after hitting a homer in the first inning. PHOTOGRAPHY BY GEORGE PFOERTNER 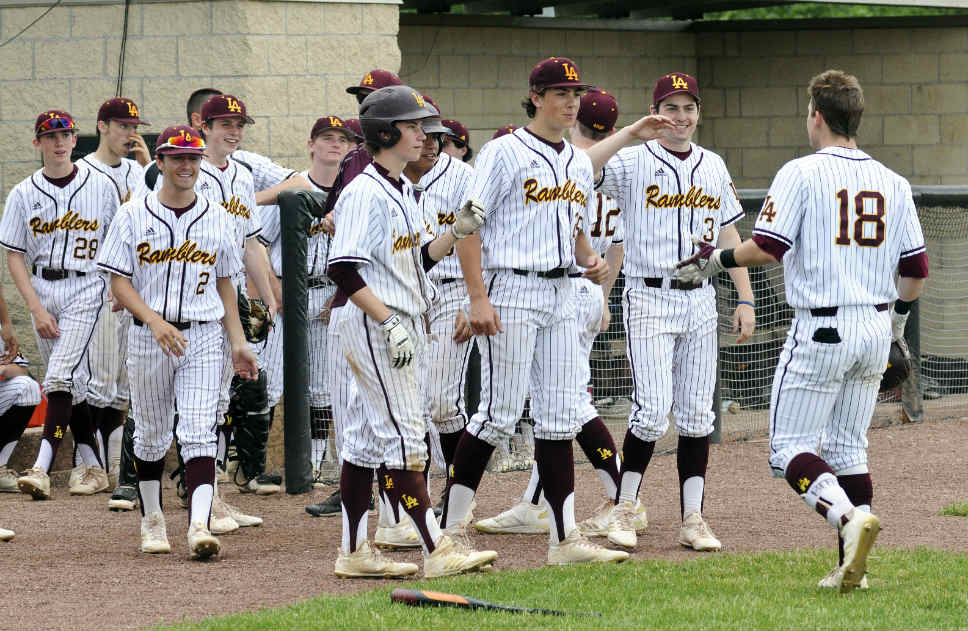 Will Jackson (No. 18) heads to the dugout after hitting a solo home run in the third inning. PHOTOGRAPHY BY GEORGE PFOERTNER 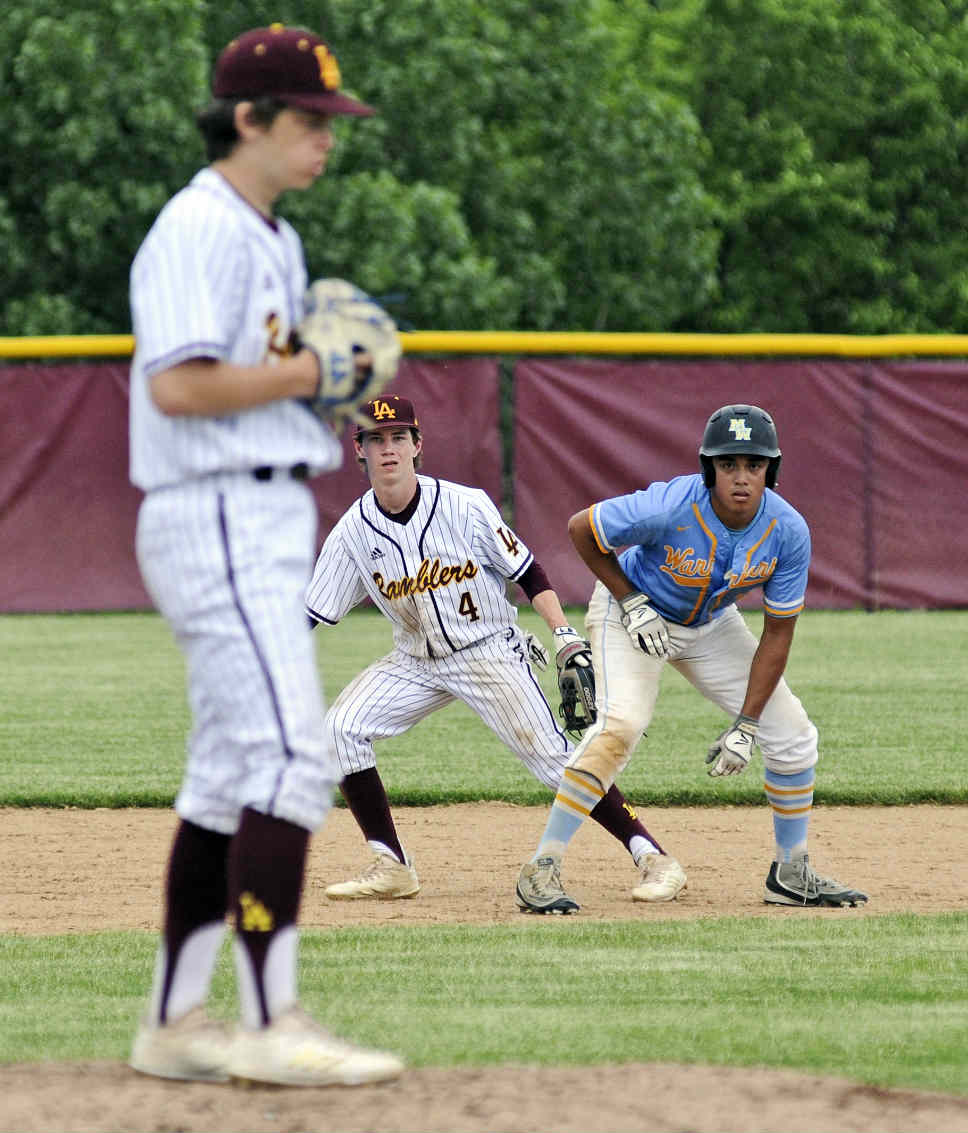