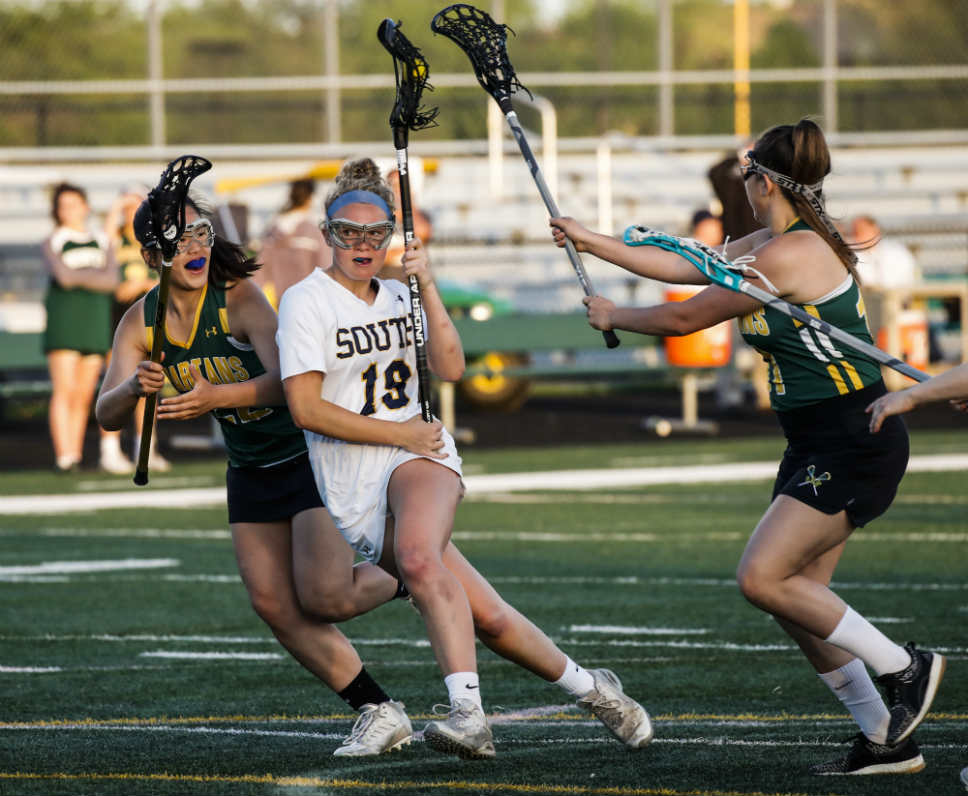 Glenbrook South’s Greer Bireley (No. 18) drives to the goal during the sectional semifinal action against Glenbrook North. PHOTOGRAPHY BY JOEL LERNER

Go ahead, call Greer Bireley’s post-goal celebration in lacrosse games an Irish jig. The Glenbrook South junior attack would love the reference to the island in the North Atlantic.

And get quite a kick out of it.

Bireley typically jumps straight up after scoring a goal and, upon landing, directs an inimitable look at a teammate or two.

“That’s her scary, cheery face,” Kahle says. “Then she throws her arms up.”

The aficionado of all things Ireland played like an All-America lacrosse player in a Glenbrook North Sectional semifinal May 23, whipping in a team-high seven goals — all in the first half — in South’s 19-5 defeat of the host school. The team’s top scorer this spring and third-year varsity player also finished with three assists in the playoff game, with one of them landing in the webbing of freshman sister Meg Bireley’s stick.

“Greer’s stick is a magnet,” Titans coach Annie Lesch says. “She’s the quarterback of our attack, and she’s a selfless player who goes hard, loves to compete and has a true passion for the game. Very coachable, too. She’s always asking, ‘Did I do that the right way?’ ”

“Greer doesn’t just put points on the board in a hurry for us,” Kahle says. “She has this way about her, a quality that keeps her teammates’ energy up, especially if we hit a rough patch. That’s a huge asset; it gets us in the right mindset. Her personality is magnetic. She makes everybody laugh. She keeps morale high.”

Bireley’s deceptiveness in games keeps opponents flustered and frustrated — and, more often than not, envious.

“Greer is very good at fooling defenders,” Kahle says, adding Bireley’s quick feet often allows her to leave those guarding her in a tangled, reeling mess. “She fakes you out, and before you know it, she’s already behind you, preparing to take a wide-open shot. Her shots and passes this year [compared to last year] are smarter.”

Palatine native Kelly Bireley, a soccer player and track and field athlete in her youth, signed her daughter up for a spot on a lacrosse house league team when Greer was a third-grader. Greer had played other sports, but the other sports took either a back seat or a trunk seat to lax in no time.

“The strategies involved, how competitive it is, the team aspect of it — there’s a lot to like about lacrosse,” says Bireley, who burned St. Ignatius with a nine-goal effort April 30.

About those nine goals …

Bireley refuses to take full credit for any of them.

“My teammates,” she recalls, “fed me nice passes. There’s no way I would have scored any of those goals without the help of my teammates. We’re a good team because we don’t have any superstars; we all work together.

“My favorite moment in lacrosse, in any game, is a transition sequence, when our ‘D’ controls the ball and starts passing it, with the ball eventually traveling all the way to our attack and ending up as a goal.”

Two years ago, in her freshman season on varsity, Bireley finished a crisp Titans transition with a game-winning goal against Lyons Township. Lindsey Karsh, then a Glenbrook South junior middie (and now sophomore-to-be and Big Red middie at Denison University in Ohio), delivered the clutch assist to Bireley in the second overtime.

“What a pass,” Bireley says.

What a humble teen, with a unique first name.

“My papa [grandpa, on her mother’s side] was named Gregory, and Greer is the female version of Gregory,” says Bireley, the daughter of Loyola Academy graduate and Wilmette native Matt Bireley. “He died [in 1998] before I was born. My mom told me her father was a very nice guy, a funny man.

Glenbrook South’s girls lacrosse program, to the delight of Lesch and others, gets to row, row, row its “boat” with Greer Bireley in it for one more season.