LAKE FOREST – The Lake Forest Preservation Foundation, with the City of Lake Forest, will host an Open House and Celebration of the completion of the 1900 east train station rehabilitation, including the just-completed interior renovation, on Sunday, June 10, from 1 to 3 p.m. The public is invited to join the Preservation members, volunteers, donors, design professional, sub-contractors, and city staff who have contributed to the completion of the project begun a decade ago.

The event will include self-conducted touring of the new spaces, with informational posters and docents to give background. Refreshments for all ages, appropriate for early afternoon, will include cake and summer treats.

Attendees will have the opportunity to see the 2016-completed superb restoration of the 1900 exterior, and on the interior the rehabilitated Waiting Room and Ticket Area, as well as the all-new Restrooms in the original baggage room at the south end of the building. This much more accommodating space was completed earlier this year with the last the federal funds for the exterior. 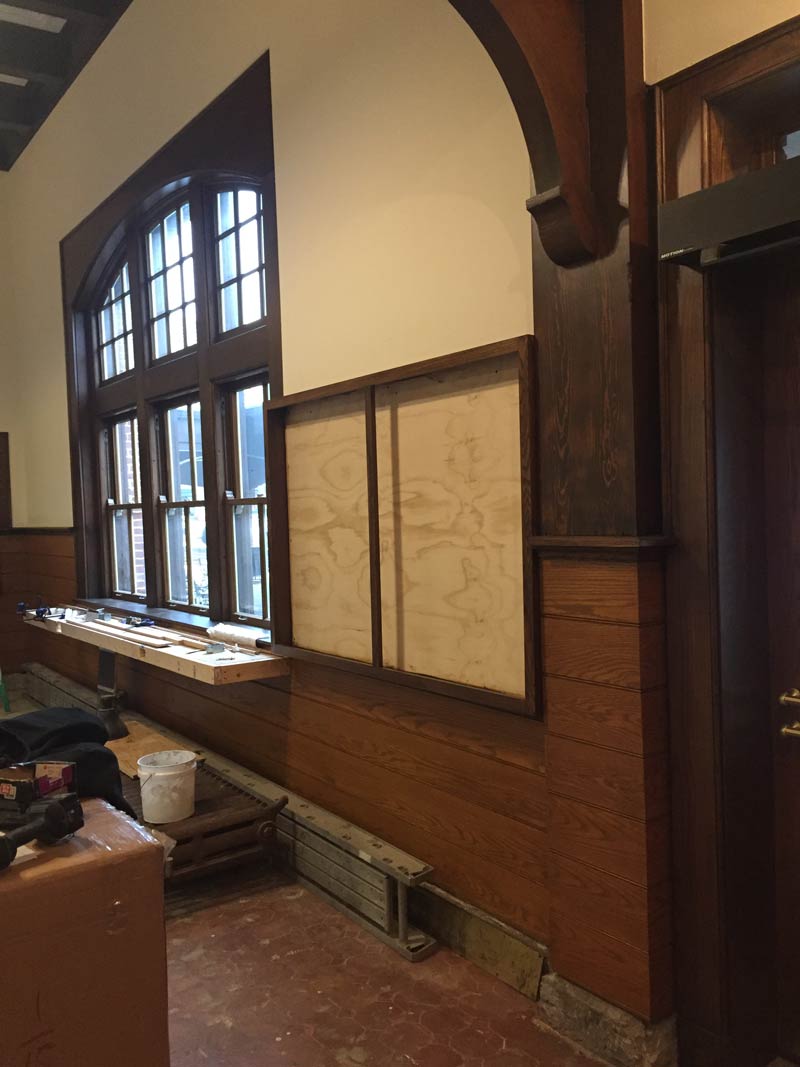 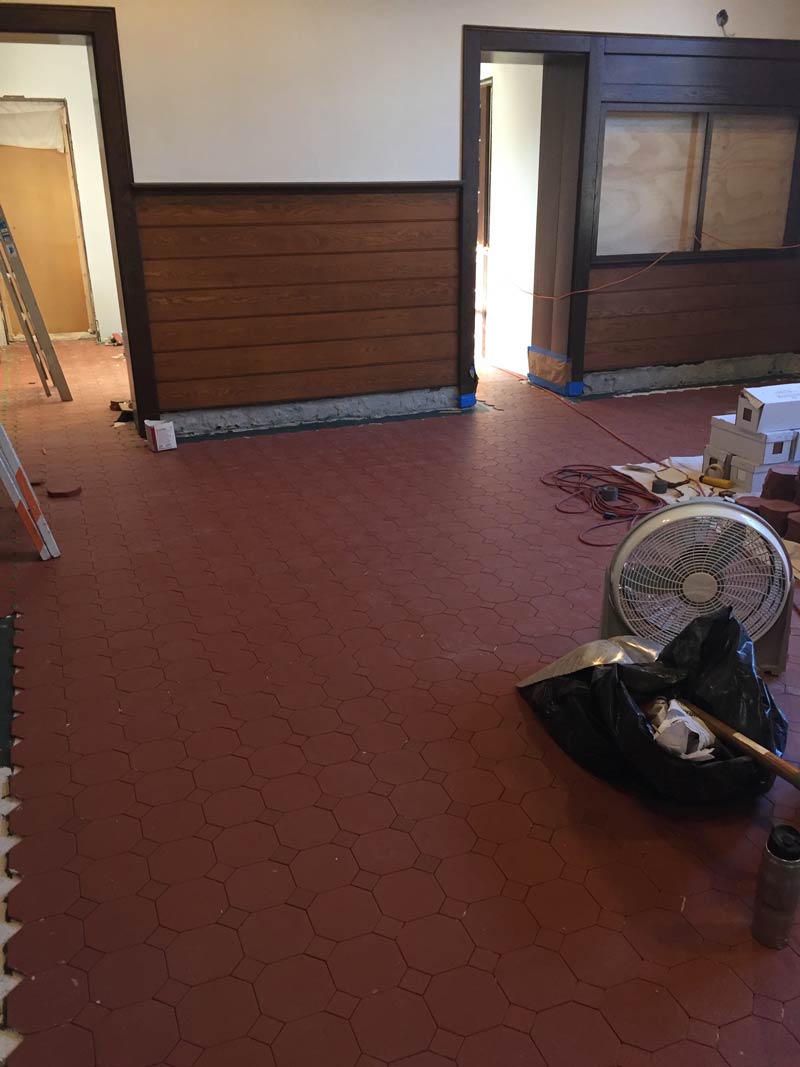 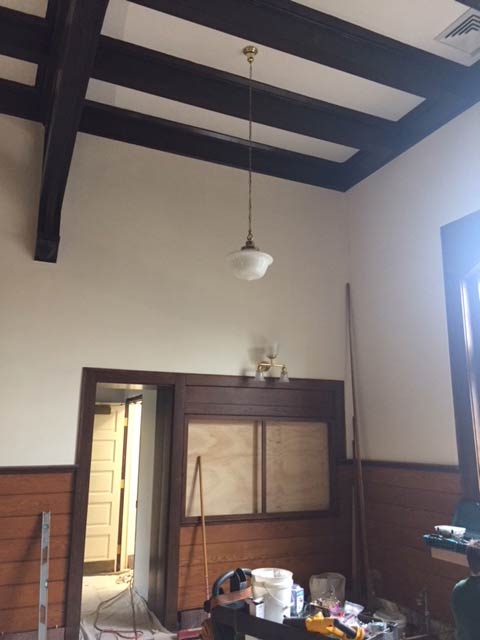 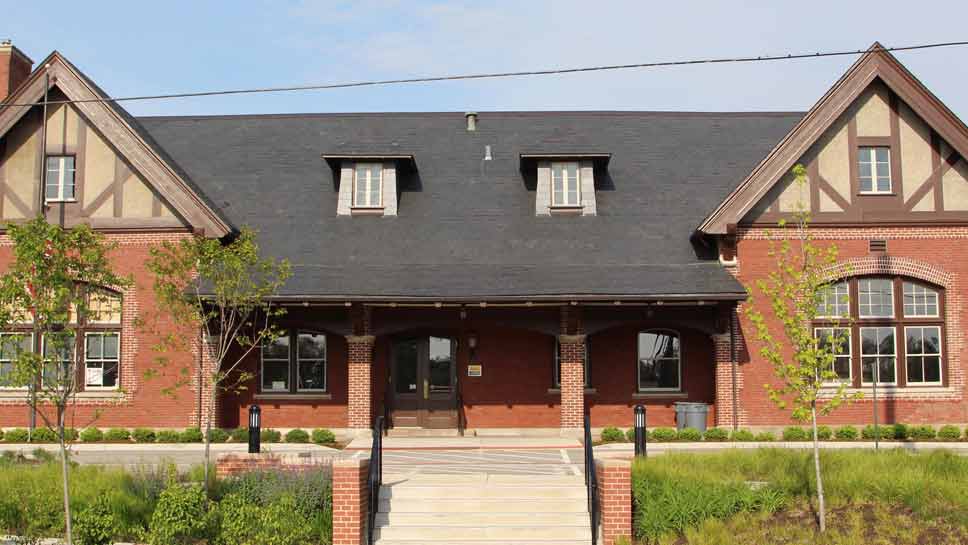 The original floor has been reconstructed, using identical red tile, found in England. The 1900 horizontal red-oak wainscoting of the waiting room has been uncovered and restored, with reconstructed marble splash guards at the base. The original benches have been restored. New display cabinets have been designed and built by project manager and Preservation Group President Jim Opsitnik.

A new gallery and passageway, the area of the former restrooms, connects the waiting room to the new restrooms. Here are a bulletin board for all community notices and a new display for the popular book exchange operated by the Friends of the Lake Forest Library, both designed and built by Opsitnik.

The east entry and ticket area is illuminated by a facsimile skylight, recalling the original of 1900, lit naturally by two roof dormers east and west. Two-part lighting fixtures on both sides of the ticket window recall the combination gas and electric lights, since electricity was available from Highland Park only after 4:30 pm and until 1 am. Another such light is above the south wall display case.

Not historic but for the convenience of 21st century Metra passengers is a new charging station counter that has been installed over the west wall’s functioning original radiator. Other changes are a bright new Farrow & Ball “Pointing” off-white paint for the walls, chosen by former Preservation board member Frank Ponterio. The ceiling lights and fans, never part of the original plan, are new also and designed to keep the focus on the restored woodwork, floor, and benches.

The city’s rental spaces in the station include the barber shop, its visually-adjacent walls also repainted by Preservation, and the shoe repair kiosk by the east door. Still to be leased and decorated is the north, 1900 Ladies’ Waiting Room and former First National Bank of Lake Forest (successor Northern Trust) extension from the 1960s, almost two decades before branch banking was permitted in Illinois.

The occasion will include tours of the 1900 to 1970 operated tunnel between the east side main station and the west side station, now Pasquesi’s. Now used for utilities, the tunnel had been accessed by stairs down south of the east side entry and coming up in the Pasquesi interior space. Most people have not seen this survivor of another age, tours given only very occasionally by David Mattoon, local railroad historian. Mattoon has contributed vital historical information about the history of the station at every stage over the past decade. He also discovered the 1901-published Railway Age photograph of the station’s interior at its grand opening on November 10, 1900, now enlarged and framed in the east entry.