This May, Anna Krolikowska, a Northbrook-based family law attorney, won the hotly contested seat for third vice-president of the Illinois State Bar Association (ISBA), the largest voluntary state bar association in the country.

Krolikowska will move up the organization’s ranks to second and first vice president over the course of the next three years and ascend to the IBSA presidency in 2021, making her the fifth female president of ISBA since the organization was founded in 1877.

“I wasn’t expecting that result, but it tells me that my campaign message resonated,” said Krolikowska, who campaigned intensely for several months, traveling thousands of miles and giving more than 60 speeches to ISBA’s constituents in communities across the state. “Women can bring a different perspective and voice if we have a seat at the table.” 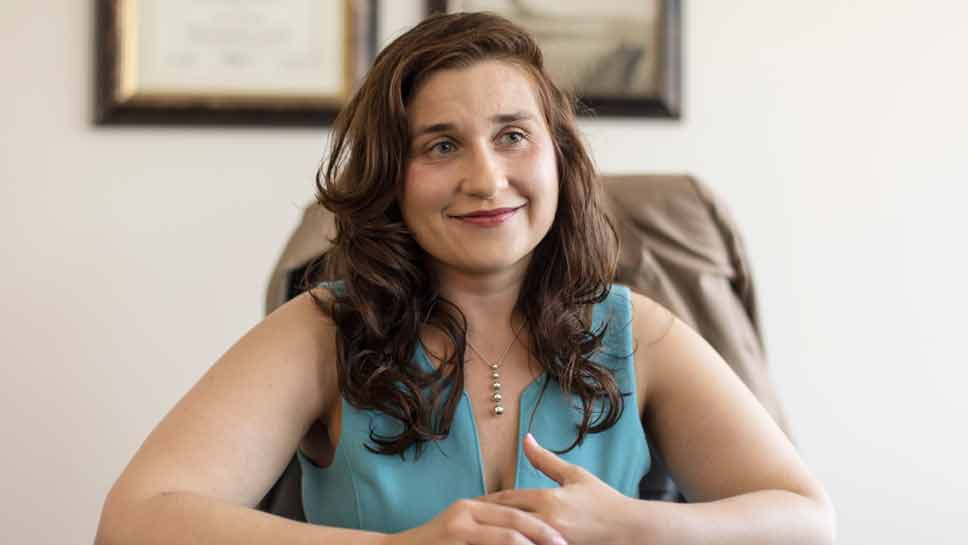 At 37, Krolikowska will also be one of the youngest ISBA presidents in the organization’s 141-year history.

“Anna will bring a new vision and focus to the ISBA during her leadership,” said supporter Emily Masalski, a Chicago-based environmental law attorney. “She’s aware of the many issues facing lawyers from all disciplines in Illinois and she’ll be a tireless advocate for each and every one of them.”

A voluntary organization of 28,000 members, the Illinois State Bar Association’s primary focus is to assist Illinois lawyers in the practice of law and to promote improvements in the administration of justice. ISBA members receive benefits such as 15 hours of free continuing education, free access to online legal research, and career assistance.

ISBA presidents often take a stand on issues during their elected, one-year term.

Krolikowska, a Chicago native who received both her undergraduate and law degrees from Loyola University of Chicago, has ambitious plans to be a voice for young, female and underrepresented minority attorneys in Illinois.

“It’s important that we mentor and create a pipeline for future leaders,” she said.

Although many of ISBA’s Chicago, Springfield and Peoria-based members work in large law practices, Krolikowska plans to advocate for the large contingent of association members who are solo and small-firm practitioners in rural parts of the state.

Saddled with heavy law school debt, but unable to charge Chicago prices for legal services, many downstate attorneys are finding it difficult to make a living, Krolikowska said. At the same time, parts of Illinois are now defacto attorney deserts, where the local population has limited access to professional legal services.

“My mission is to support these solo and small-firm attorneys by helping them market their services and manage their practices,” said Krolikowska.

Krowlikowska, who lives with her husband in Palatine, immigrated to the United States from Poland as a teenager, settling on the northwest side of Chicago with her family. After quickly learning English, Krolikowska tested into Lane Tech College Preparatory High School before heading off to Loyola University to earn her B.A. and J.D.

It was an interesting, nuanced class in law school that convinced Krolikowska to pursue family law.

“I felt I could help people at a difficult time in their lives,” said Krolikowska. “That’s always the goal.”

Krolikowska is now a partner in the Northbrook law firm of K&R Family Legal Services, where, as a litigator and trained mediator, she works to offer her clients diverse, creative approaches to resolving marital disputes.

It’s this very skill set, Krolikowska said, that will serve her well as ISBA president.

“I deal with people who are experiencing strong emotions and under tremendous stress, which lends itself to leadership roles in general,” said Krolikowksa.

She credited her membership in ISBA with giving her a leg up as a young attorney starting out in practice 10 years ago, and said there’s intrinsic value in community bar associations to introduce like-minded law professionals.

“I met wonderful mentors through ISBA who taught and encouraged me,” said Krolikowska. “We are stronger together than apart.”