The evening’s excitement began with an interview with NBC Channel 5 reporter Michelle Relerford. He told her, “I’m a storyteller and then my love of music … it’s music and children that’s the secret.”

In a portion of the document, it read, “On behalf of the entire Northbrook Community, I proclaim profound gratitude and appreciation to Bill Vaananen for his exemplary service and his many contributions to our community, especially his professionalism, and dedication of over four decades to the school children of Wescott School…”

Throughout the night, there were celebrations of his 70 musicals and over 400 songs that were performed at Wescott School. Current students who addressed the audience were Cailyn Kelsen and Daniel Fliman. Alumnus Bill Prokopow sang Beatle John Lennon’s ballad “Imagine” to him; which was followed by Josh and Adam Carl and other alums, who spoke of Mr. V’s amazing influence and called him a “hidden treasure” in Northbrook. 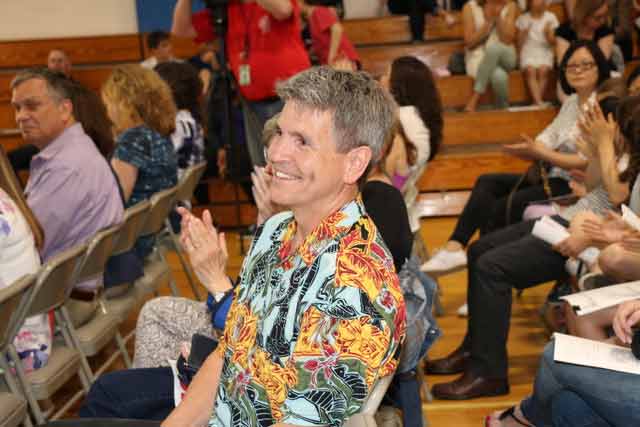 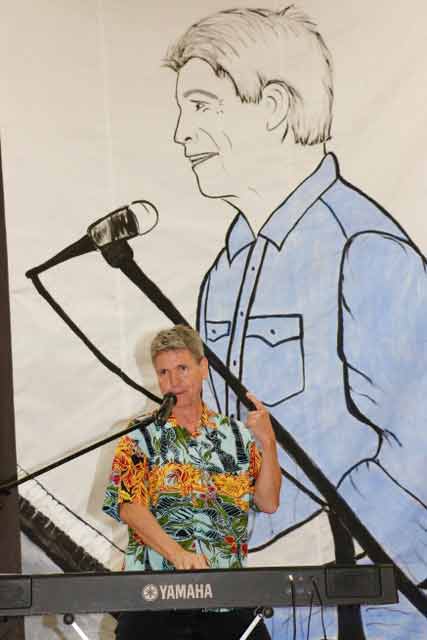 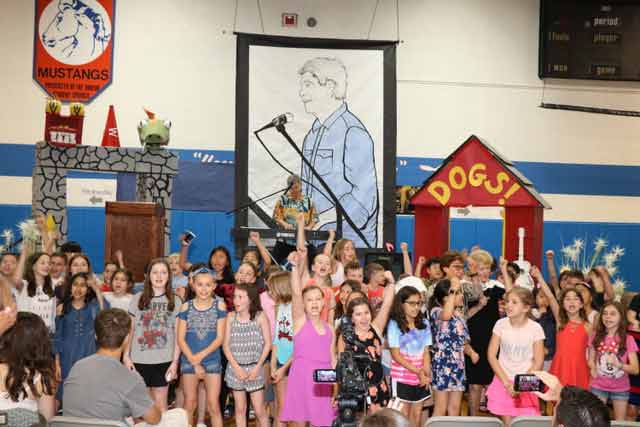 However, he’s never been completely hidden. He wrote “A Village by the Stream” in 2001 to commemorate Northbrook’s centennial, which is showcased in a bronze statue in Village Green Park! He has received so many awards, honors and certifications throughout his career, for example the esteemed Golden Apple Award for Excellence in Teaching, the Human Rights Award, and the National Star of Teaching Award.

Former Principals Dr. Judy Frank-Gonwa and Dr. Terri Carman were in attendance and reminisced with the audience. Former Superintendent Dr. Harry Rossi was traveling, but sent a farewell video!

At the evening’s conclusion, everyone joined in singing many of Mr. V favorites, “One Big Family,” “Just Read A Book”, “The Science Mash”, “Dogs”, “Joe Creek”, “Just Plain Folk,” and so many more! This was followed by a surprise appearance of the famous “Wescott Sausage mascots” and Elvis Presley, aka alumnus Andrew Braverman, who played “The King” in one of Mr. V’s musicals back in the 90s!

After retiring, Mr. V has said that he would like to be an artist-in-residence at schools, and publish his songs so that his shows and songs may find a life in other schools nationally and possibly worldwide!

The beat will go on, and the wonderful memories living inside the heads of over 15,000 present and former students will remain. Like the conclusion of the Wescott theme song, “One Big Family,” it is quite probable that Mr. V will “keep on rolling and never stop…at Wescott everyone is family.” That is forever. Happy trails Mr. V!