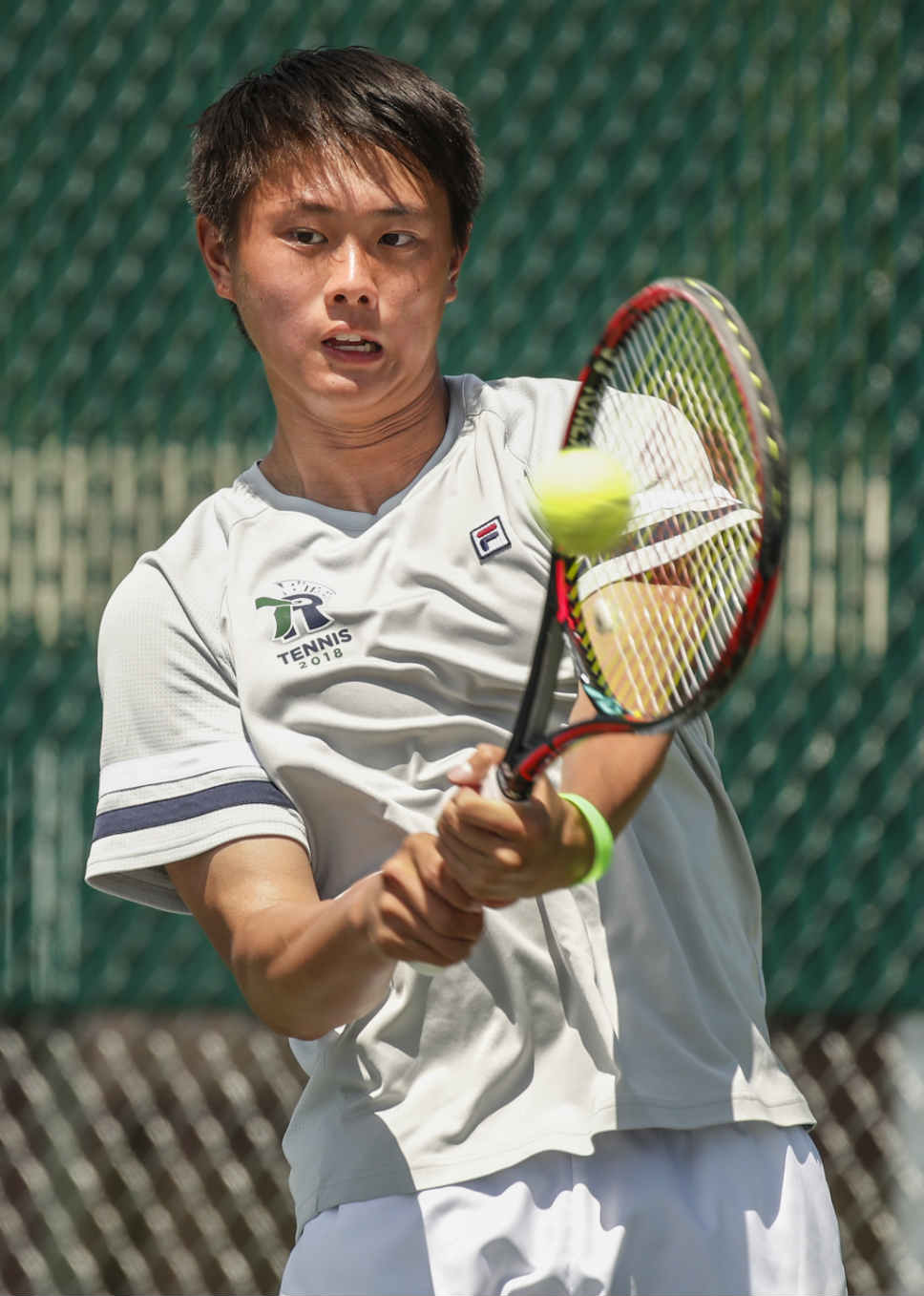 It was the roar heard round Arlington Heights last spring.

And it was belted by none other than Jeffrey Chen — a quiet, unassuming, respectful tennis player from New Trier — after a singles victory in a quarterfinal at the 2017 Class 2A state meet.

Chen had just defeated a higher seed, Glenbrook North’s Nick Marino, 6-2, 2-6, 6-2 when he opened wide and turned into a racket-wielding lion on a Hersey High School court, some 27 miles north of Brookfield Zoo.

“I’ll remember that moment for a while,” New Trier junior Brent Saltzman said at last weekend’s Class 2A state tennis meet. “Jeffrey clenched a fist and then yelled. I mean, really yelled. No one expected that to come out of his mouth.

“That was such a great moment to witness, seeing him get excited like that,” half of the Trevians’ No. 3 doubles team added.

Chen, then a junior, ended up fourth at state.

The tri-captain — seeded 5-8 once again in singles — ended his decorated tennis career with another state medal and with a few more celebratory eruptions last weekend, topping Stevenson junior Zachary Kim 6-2, 6-2 in the match for third place at Hersey in sunny, steamy Arlington Heights May 26.

Two years ago, as a sophomore at state, he teamed up with then-senior Michal Kusznerko to place fifth in doubles for the state champions.

“Such an exemplary leader on the court,” Trevians coach Tad Eckert said of the Brandeis (Massachusetts) University-bound Chen. “He, along with our other captains (seniors Reed Bianucci and Peter Leutz), showed the young guys so much, motivated our young guys.

“Our younger guys this weekend wanted to do well for our captains.”

Captain Chen almost didn’t survive his third-round match against Highland Park junior Jeremy Learner last weekend, after falling behind 6-2, 3-1 May 24. Chen needed an assist in mid-match, and the impressive shotmaker got one — from NT assistant coach Kevin Andersen.

“Weathered that storm,” he added with a look of relief.

Chen, Andersen noted, looked way too tight at the outset against the Giant, missing shots he normally whacks for winners.

“Jeffrey loosened up, got steadier and ended up wearing Jeremy down,” Andersen said. “He then played a good, smart, considerably cleaner match in the next round [against senior and reining state runner-up Danilo Kovacevic of Maine South], hitting higher percentage shots than he had against Learner.”

Chen’s control and power proved too overwhelming for an exhausted, ailing Kim in the match for the bronze.

“Jeffrey,” Saltzman said, “fights and works hard in every match, and he has every shot known to mankind. He motivated all of us all season. Watching him this weekend makes me want to play on Saturday [Day 3 of the state tournament] next year more than ever.”

Fear gripped Saltzman when he was paired with Chen for a doubles match last spring. But the trepidation had nothing to do with the netters on the other side of the net.

“I was scared of not playing well, of disappointing Jeffrey,” Saltzman recalled.

As Chen left the court following his final prep match last weekend, family members and teammates and friends and other well-wishers caught up to him and congratulated him. Before heading indoors for relief from the stifling (summer in May!) conditions, the polite Trev stopped to answer a few questions.

“One of my guys told me, ‘What a different feeling, finishing second this year compared to last year,’ ” Trevians coach Tad Eckert said. “We had to work hard all weekend, especially [May 26, Day 3 of the three-day tourney]. A lot of things had to go right for us, and they did. Our kids got over the disappointment of not being able to go for the top prize [after Hinsdale Central had clinched its fifth state championship in seven years well before the end of action on the final day].”

Zipoli/Drier lost only once in seven matches, with the 6-3, 6-2 setback coming in a quarterfinal May 25 to eventual state champs Trevor Hamilton and Andrew Buhelos of Hinsdale Central. The Red Devils duo had entered the state meet with an undefeated record.

“Jake and Dylan had many moments of truth this weekend,” Eckert said. “They did such a good job, coming up big for us.”

“Max played so well this year when he had to face an opponent a second time,” Eckert said. “He made the adjustments he had to make the second time around — rare, that’s rare for a freshman.”

“They’ll definitely be missed, all of them,” Eckert said. “You know what? I don’t want to even think about that right now.”

Lake Forest HS: The Scouts finished in a tie for ninth-place (10 points) at last weekend’s Class 2A state tennis meet behind Yusef Alsikafi/Oleksyi Vyshyvanyuk’s sixth-place showing in doubles. Seeded 9-16, the pair downed 5-8 seed Joseph Li/Mark Polowczak of Naperville Central in a fourth-round match and again in a consolation-semifinal match.

Lake Forest’s coaching staff paired Vyshyvanyuk, a junior and standout singles player, with Alsikafi, a senior and a veteran doubles player, late in the season. Smart move.
“They’d been getting steadily better and better,” Scouts coach Corky Leighton said. “They played more aggressively, with a better understanding of what it takes to play winning doubles. They were a good fit, chemistry-wise, and they created opportunities for each other with the way they attacked.”

Alsikafi/Vyshyvanyuk won five of seven matches in the three-day tournament. Each received a medal May 26.

Scouts junior Will Zordani won two consolation-round singles matches after a loss to eventual state runner-up Dominick Cuchran of Lyons Township in the first round May 24. 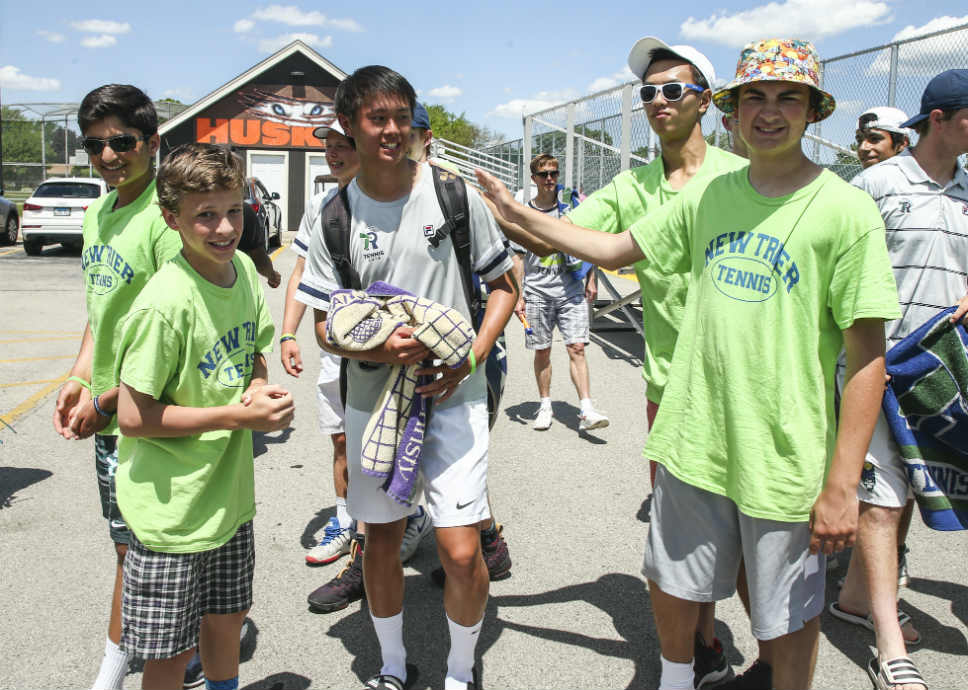 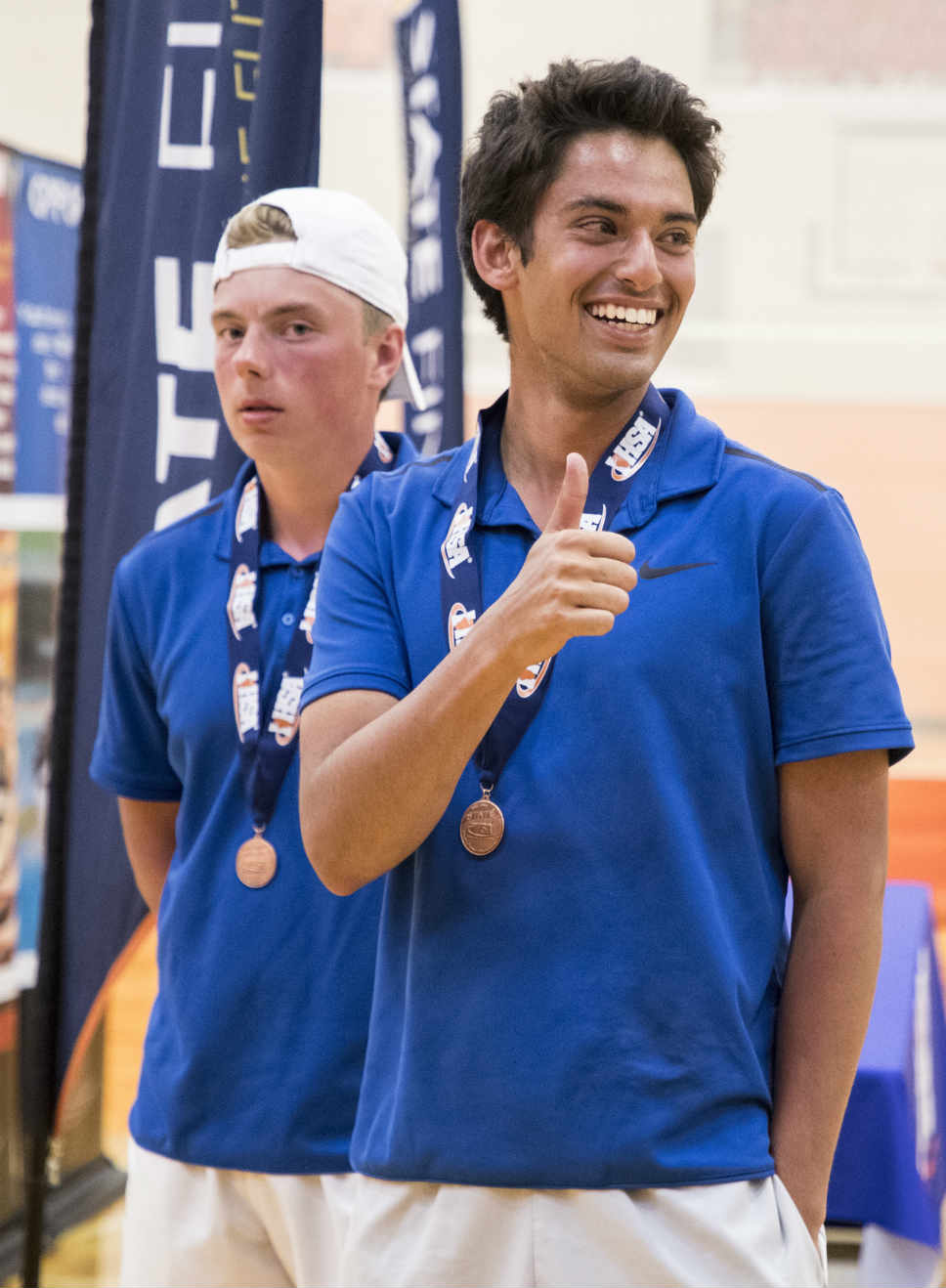