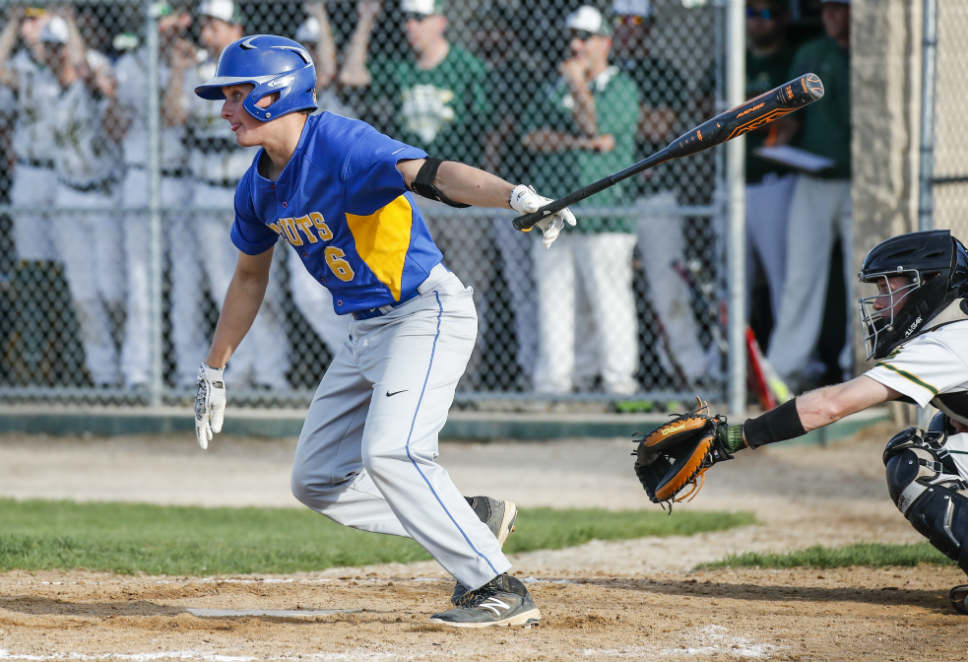 Andrew Gough has played a ton of baseball over the years. So he pretty much knew the ball was going out the second he hit it.

No, that’s just not Andrew Gough.

But, for the record, the Lake Forest High School senior did milk it for all it was worth. He savored the moment. Had fun with it.

First, Gough pointed his “finger to the sky” — and kept it there. And then, he wasn’t exactly Speedy Gonzalez — or, Mario Andretti — circling the bases.

Relish the occasion. Why not?

Gough’s clutch home run — his second of the season — over the left-field fence in the top of the sixth inning was enormous. It gave the 13th-seeded Scouts a 3-2 lead over Warren in the Class 4A regional championship game at Glenbrook North on May 26.

“I didn’t even look up after I hit it … just pointed my finger to the sky,” said Gough, an all-North Suburban Conference second baseman. “I knew it was gone.”

But the celebration, as it turned out, was short-lived.

The Blue Devils, seeded No. 6, tallied one run in the seventh and added another run in the eighth to claim a 4-3 victory to oust the Scouts from postseason play.

Gough, who will take his game to Middlebury College next fall, plans to major in philosophy.

Maybe he’ll pick up a minor in psychology — especially after this gut-wrenching loss.

As a three-year varsity starter, Gough had his share of big moments.

But none bigger than that Big Smack against Warren’s Riley Kocen.

Gough, who was 0-for-2 (two fly outs} against the Blue Devils right-hander, strolled to the plate as the cagey veteran in the sixth inning.

Like a poker player, Gough detected a tell from Kocen.

“After he missed with a fastball outside, I figured that he’d try to mix it up,” said Gough, who teamed with Kocen in club baseball (Slammers).

“Typically, he’s not going to give me another fastball right there,” Gough added. “I saw him digging into his mitt —like he was going to throw a curve.”

Gough’s picturesque swing did the rest.

What didn’t go as planned for Gough this spring was … Gough, the Pitcher.

A key hurler during his sophomore season, the right-hander had big plans entering the 2018 campaign.

“I was supposed to be our No. 1,” said Gough. “I worked real hard on my pitching in the offseason.”

But that went by the wayside, when he sustained a shoulder injury in his second outing of the season.

“I couldn’t throw a ball for two weeks,” said Gough. “Had to be the DH [designated hitter] for a while.”

“We had a junior and three sophomores who really stepped up and filled the void,” said Gough. “I trusted them. All of them did amazing jobs.

“And that’s what I loved about this team,” he added. “The seniors looked at the juniors and sophomores as equals. The chemistry on this team was great.”

Once his arm came back, Gough focused on hitting cleanup and playing second base full time.

The keystone combination of Gough and senior all-conference shortstop Caleb Durbin, who also hit a solo home run in the regional final, was top notch.

“For a coach, it was very comforting knowing that you had Andrew and Caleb out there,” said Del Fava. “A pretty good double-play combination.

“Both of those guys gave it their all,” the coach added. “They left everything on the field. We will be okay with pitching next year. We’ve got a lot of depth there. But replacing guys like Andrew, Caleb and Drew [Golde] will be a problem.”

Turning to his right and not seeing Durbin will be an adjustment for Gough.

The Philosophical Gough thought about that for a second — as he ended a postgame interview.

“It’s pretty disappointing to think that I will never play [on the same diamond] with Caleb again,” he said. 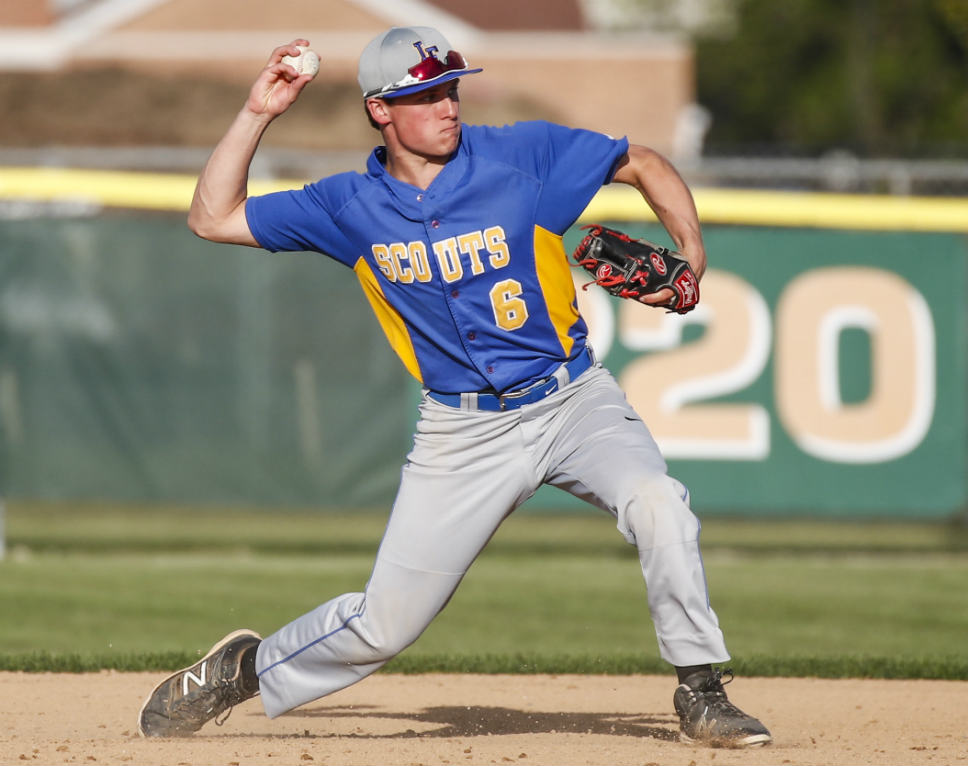 Andrew Gough of the Scouts makes a play at second base during the regional semifinal at Glenbrook North. PHOTOGRAPHY BY JOEL LERNER 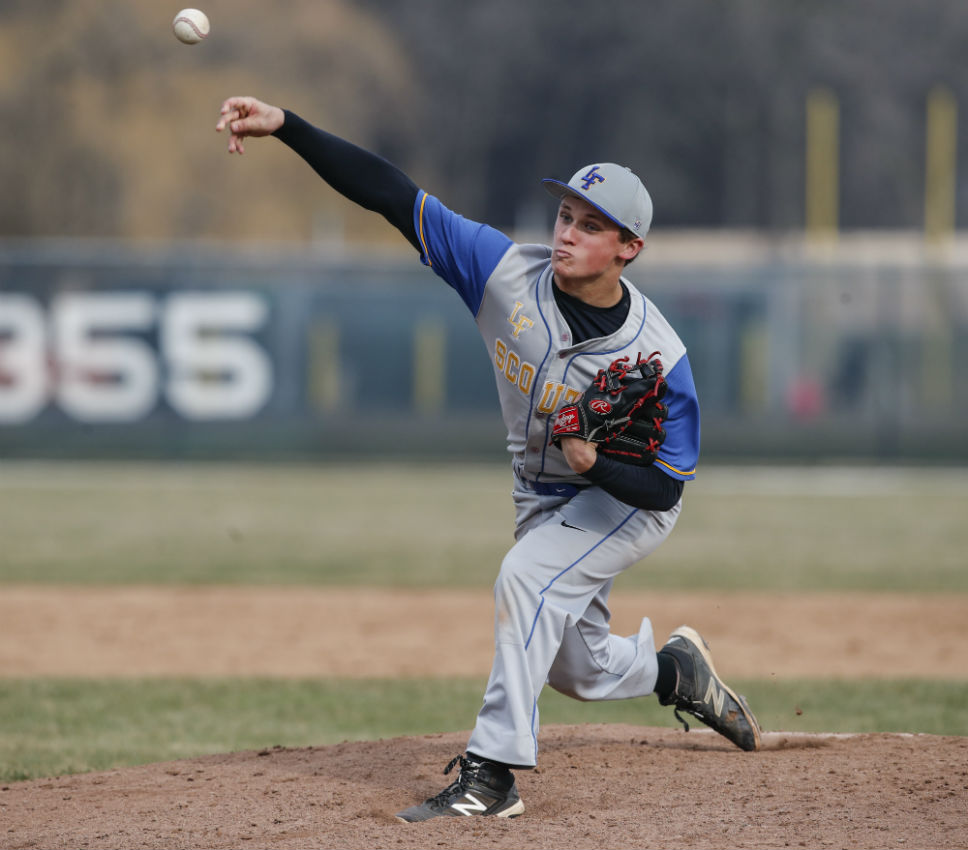 Andrew Gough delivers a pitch during an April game against Stevenson. PHOTOGRAPHY BY JOEL LERNER