NORTHBROOK – With jamming bands, burgers & beers, buckets, raffles, kids’ games, and inflatables, there’s something for everyone at this year’s Block Party @ St. Norbert.

Headliner Mr. Blotto takes the main stage at 8:30 p.m. Chicago’s favorite jam band draws from a 300+ playlist, jamming hits from country to reggae, from the Grateful Dead to The Velvet Underground, with a few originals added in too.

After that, acoustic group Crawford’s Daughter takes the stage with songs from artists including Fleetwood Mack, Rolling Stones, Marvin Gaye, and Little Big Town. At 7 p.m., EarthMother takes over the stage. Influenced by 60s and 70s rock from funk to progressive rock to country, EarthMother keeps their “music dripping with psychedelia.”

You won’t want to miss a special surprise treat during the concerts, as Marcello’s restaurant in Northbrook will be honored for their supportive 10 years of sponsoring Block Party @ St. Norbert.

Entry fee for Block Party is $5, but doubles after 7 p.m., so come early and stake out your spot. Food and beverage gardens open at 3 p.m., with craft beer offerings, fresh grilled foods, and new menu items, including corn on the cob and watermelon. There will also be a 50/50 drawing and raffles for a bike, necklace, and Orange Theory Fitness membership. Be sure to sign up for the popular Bags Tournament, which starts at 5 p.m.

To make the most out of this year’s Block Party, start out the day with a 5K Fun Run/Walk and Kids Dash, which steps off at 8 a.m. and winds through the beautiful Techny Prairie Park. This year’s proceeds will support St. Norbert’s Youth Ministry’s annual Habitat for Humanity trip. Registration opens at 7 a.m., and awards will be given to overall male and female finishers and to first place male and female in each age group. Sign up before May 31 to take advantage of the reduced early registration fee, which also includes free admission to Block Party and a commemorative long-sleeve T-shirt, featuring the Chicago city flag.

Block Party @ St. Norbert is steps away from the Northbrook stop on Metra – Milwaukee District/North Line. 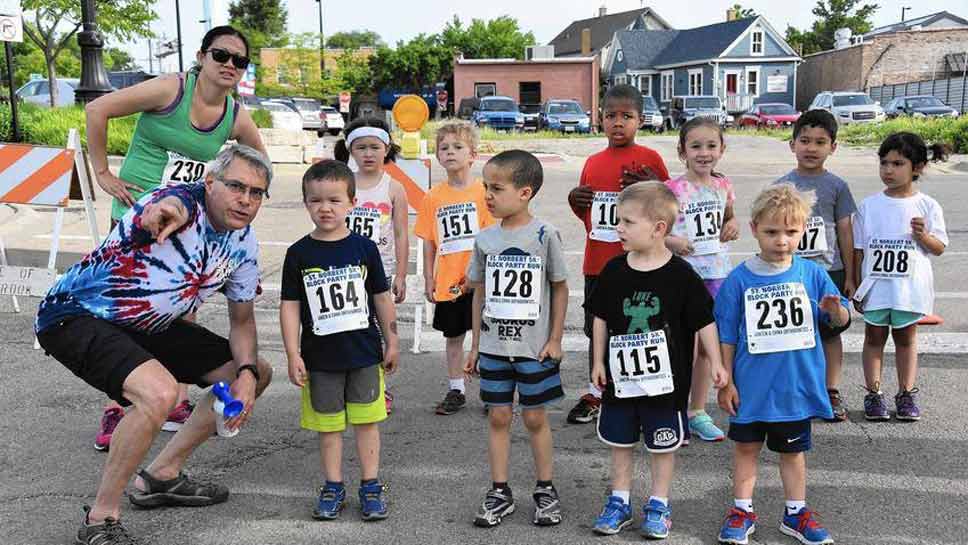 Kids get ready … and set… at a previous Block Party at St. Norbert’s.