On June 2 and 3, Morris will read excerpts from her latest novel, Gateway to the Moon, in Wilmette and Northbrook as a featured speaker in the popular North Shore Books ‘n’ Bottles series, where book lovers meet notable authors in a social, intimate setting.

“I left (Highland Park) at 18 for college, but the pull of home has never left me,” said Morris in a telephone conversation from her home in Brooklyn, New York. “I go back whenever I can. It’s my charging station.”

Morris is the author of numerous novels, including The Jazz Palace, A Mother’s Love, and House Arrest, and the travel memoir Nothing to Declare: Memoirs of a Young Woman Traveling Alone. She is the recipient of the Rome Prize in literature and the 2016 Anisfield-Wolf Award for fiction. 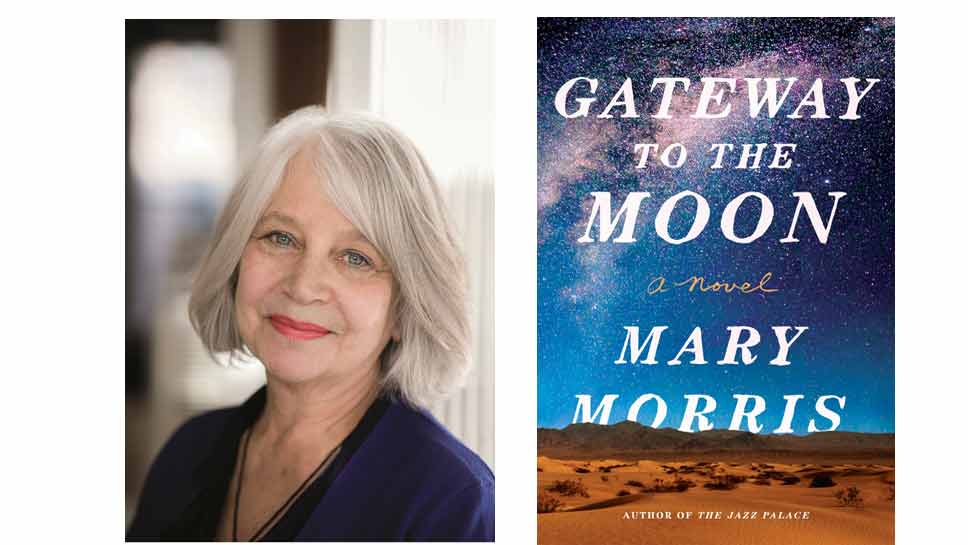 At left, Highland Park native Mary Morris in a photo by Zoé Fisher, and the book jacket for “Gateway to the Moon”, the author’s latest novel.

Gateway to the Moon is set in 1492 during the Spanish Inquisition, when Jewish and Muslim populations were expelled from Spain and Christopher Columbus had set sail for the New World. The book tells the story of the Spanish Jews who chose not to flee persecution, resolving instead to convert to Christianity in name and continue observing their Jewish beliefs and rituals in secret.

Gateway to the Moon weaves a fictional narrative around the true story of Luis de Torres, a historic figure who served as Christopher Columbus’s translator, and of de Torres’s modern day descendants – America’s crypto-Jews – who settled centuries later in the hills of New Mexico.

Morris discovered the phenomenon of the crypto-Jews while living in Santa Fe, New Mexico 25 years ago.  It was a Catholic babysitter who first told Morris of his family’s long-standing practice of lighting candles on Friday nights, similar to the Jewish observance of Shabbat, and their custom of avoiding food made with pork.

Morris spent years inside libraries and museums in North Africa, Spain, Portugal and New Mexico, researching the Spanish Inquisition, reading the journals of Columbus’ first two voyages, and studying early maps of the United States and the expeditions of the Spanish conquistadores.

“What I learned from writing this book is there are certain myths we grow up with,” said Morris. “One is that Columbus was a great explorer, and the other is that America is all about the pilgrims. But once you realize that the Hispanics and the crypto-Jews were in the New World, you know there are other stories to tell.”

A professor of writing at Sarah Lawrence College, Morris left the Midwest more than 50 years ago but frequently writes about the region, often drawing on her childhood memories of Highland Park, when many parts of the village were still heavily forested and wild. Many of Morris’s short stories and early novels are set in the fictional town of Winona. “Winona is Highland Park,” said Morris.

An original free-range kid, Morris would often play on the banks of Lake Michigan, following Indian trails along the bluff and reading books in the bent-over trees that served as natural trail markers.

“I spent a lot of time roaming,” said Morris, who attended Elm Place Elementary School before graduating from Highland Park High School. “As a little girl, I would imagine the lives of Highland Park’s Native Americans. That legacy and layered history is part of what made me write Gateway to the Moon.”

The author of three travel memoirs, Morris says she’s nurtured by her adventures abroad, perhaps a byproduct of her mother’s passion for all things French.“My mother was a Highland Park housewife who loved France so much, she named our first dog Renoir,” said Morris, who is fluent in both French and Spanish.

In between writing and teaching, Morris continues to explore parts unknown. She’ll soon embark on a family trip to Italy before gearing up for her next book, set in Jamaica.

“Since I left Highland Park, I’ve been on a journey,” she said. “A lot of my work is about the tension between home and away.”