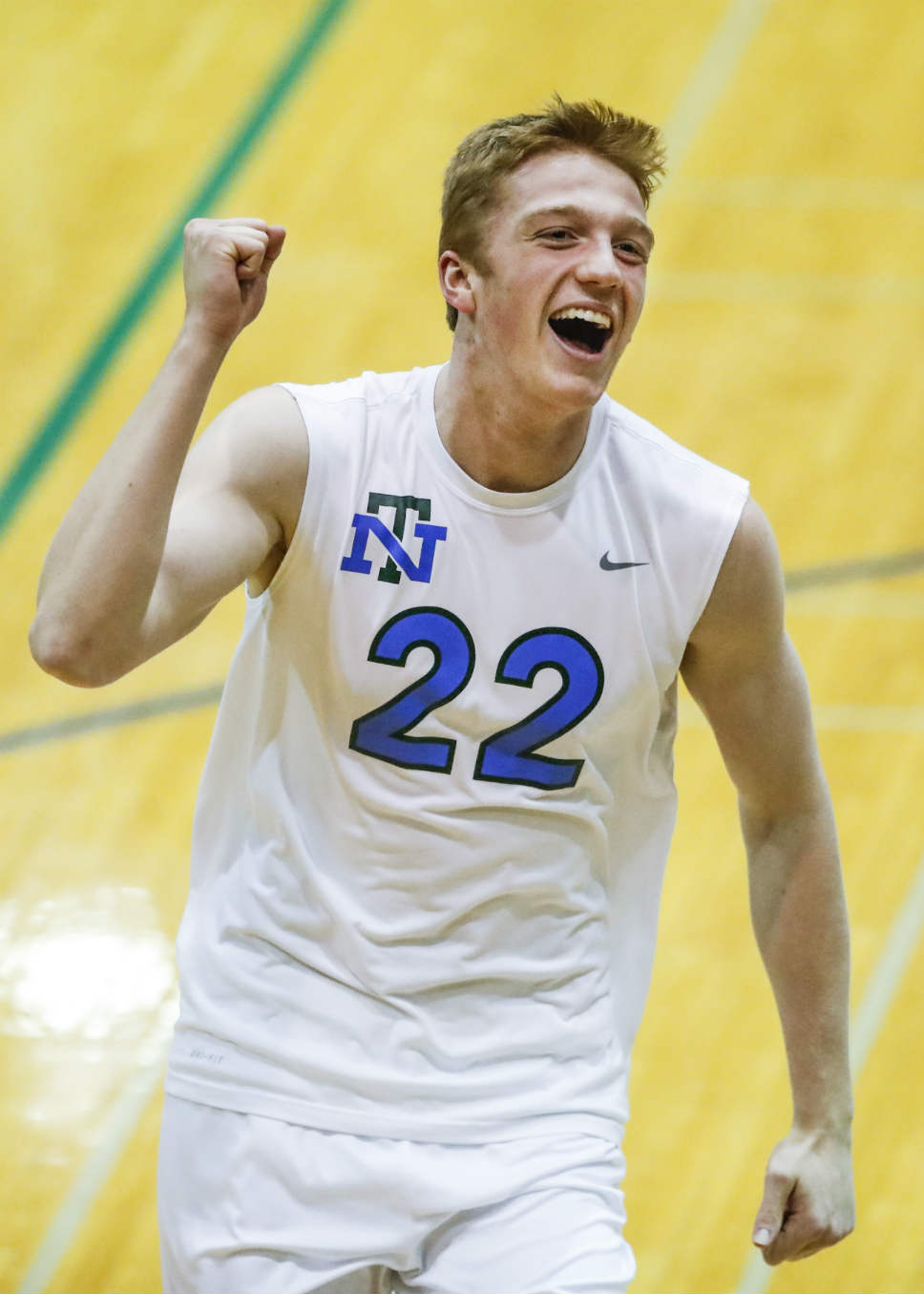 James Snyder, seen here in earlier action this spring, and the Trevians beat Loyola Academy to advance to the state volleyball tournament. PHOTOGRAPHY BY JOEL LERNER

New Trier’s boys volleyball team played for a sectional championship Tuesday night, and the Trevians turned the gym into a dog kennel.

NT’s bench players unleashed a chorus of celebratory barks after either a big NT kill or a resounding NT block throughout the Glenbrook South Sectional final against Loyola Academy May 29.

“That’s so helpful, hearing our guys get as excited as they do,” said New Trier senior middle and Loyola University recruit Joe D’Attomo, who finished with a match-high 12 kills in the Trevians’ 25-17, 26-24 victory — their third in as many matches versus LA’s Ramblers (27-13) this spring.

“They know … our bench guys know when it’s time to get really loud,” the 6-foot-6 force added with a grin.

D’Attomo bludgeoned the ball for two kills in a three-point stretch in the first set, with the second giving NT a 17-12 lead and triggering a Loyola Academy timeout. His block widened the gap to 19-12, and his sixth kill of the set puffed NT advantage to 21-13.

“It was intense, both sets; we like to play with intensity,” D’Attomo said. “It gets as intense, if not more, when we practice. We love to get after it in practice.”

Loyola Academy turned up the heat after falling behind 14-8 in the second set. Ramblers junior Jack Howard (4 kills, 2 blocks) struck for consecutive kills, before a block by senior Drake Johnson (6 kills) narrowed NT’s lead to 16-15. LA took a 19-18 lead — its first lead in the second set since winning the first point — and saved two match points after trailing 24-22.

D’Attomo sealed matters with a kill and block in the final two points.

“Loyola hits hard and executes well,” Haak said. “We played well defensively, came up with big blocks. On offense, going against a team like that, we knew we’d have to put on a variety show.

“Total team effort,” the coach added. “We’re deep; we have so many great volleyball players, so many contributors.”

NT sophomore outside hitter Colin Heath finished with six kills and an ace; senior setter Tergel Gandelger lofted 22 assists; junior libero Aaron Schatz had five digs; and senior Marty Tatosian popped for three blocks, none bigger than the one that put NT up 22-21 in the second set.

“Timing it right, pressing over the net,” Gandelger said of the keys to thwarting a kill attempt.