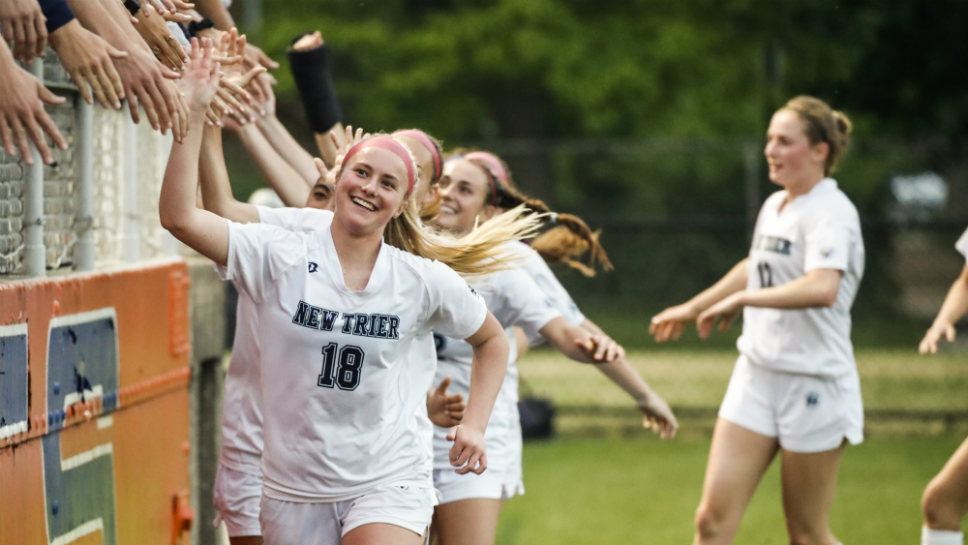 The ball and the right foot of Emma Weaver worked in tandem and were seldom apart — or, so it seemed — in the Class 3A girls soccer supersectional at Evanston High School on May 29.

In fact, the ball and Weaver were downright chummy as New Trier stormed past Carmel Catholic 5-1 to advance to the state tournament for the fifth year in a row. The sophomore superstar, a Villanova University recruit, ignited the Trevians’ attack with two goals and two assists.

Weaver, with her patented pink headband, was ever-present and ever-dangerous.

“[When she’s on the field] it’s great to be a spectator,’ the coach added. “She’s as dynamic as all get out. Phenomenally dynamic.”

“I saw their goalie lined up at the near post, and so I just ripped it to the far side,” said Weaver.

It was one of those don’t-blink-or-you’ll-miss-it shots.

It left a jet stream.

“That’s the thing with Emma,” said Burnside. “One moment she’s got the ball, and then next thing you know the ball is rattling around in the cage.”

The NT coach loved the way his squad jumped out on top.

“I thought we did a good job of matching their energy [in the early going],” Burnside said. “Scoring that first goal was key.”

Weaver’s next big moment came with 37:37 left in the second half, when she took the ball down the right side and sent a perfect cross to a waiting Victoria Flannagan.

Flannagan, who continues to step up her game in postseason play, calmly punched it in to make it a 2-0 game.

“Victoria is pretty amazing at getting to that near post,” said Weaver.

A little over five minutes later, New Trier fans got a peek into the future, when freshman forward Grace Walker scored on a feed from Hoban to put the Trevians (23-0-2) up by a hat trick.

And the rout was on. Well, not quite.

The Corsairs (16-5-1) eventually got on the board, when Olivia Salvi slipped a hard shot past NT goalkeeper Megan Dwyer.

“Carmel is very athletic and very well-coached [Ray Krawzak],” said Burnside. “We were worried coming in. We always worry.

“But tonight happened to be our night,” the NT coach added.

For good measure, the Trevians sealed the win by adding two more goals in the final 17:13 of the game on goals by Weaver and Nicole Kaspi.

And according to Burnside, playing the final weekend of the season at North Central College in Naperville never gets old.

“We never want to normalize [going to the state tourney],” said Burnside. “Because it’s not normal. Getting there is hard work.”

Two seniors — Kaspi and Caroline Iserloth — will be playing in their fourth straight state tournament. They were part of two state championship teams (’15 and ’16), while they helped NT to a state runner-up finish last spring.

Burnside, who went over 500 career wins earlier this season, has guided NT to six state crowns and two runner-up finishes. 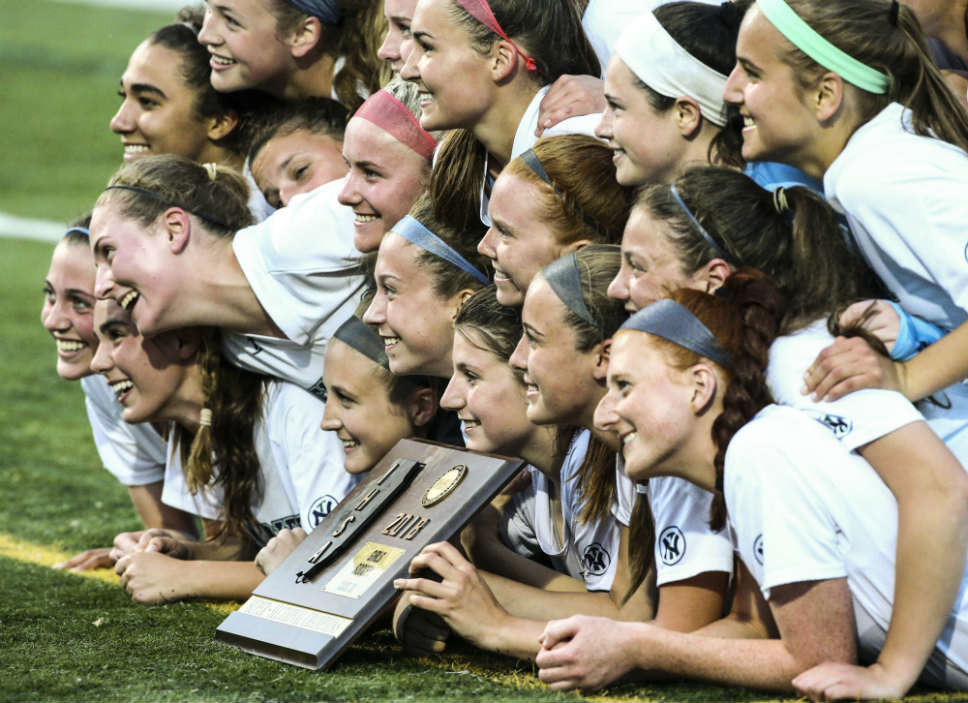 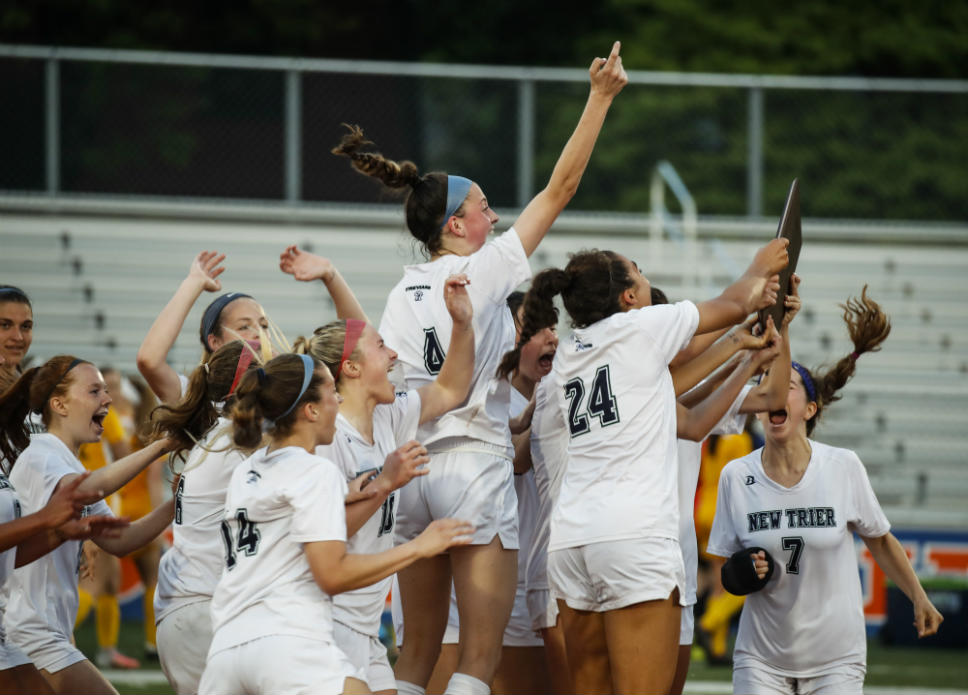 The Trevians celebrate their win over Carmel Catholic. PHOTOGRAPHY BY JOEL LERNER 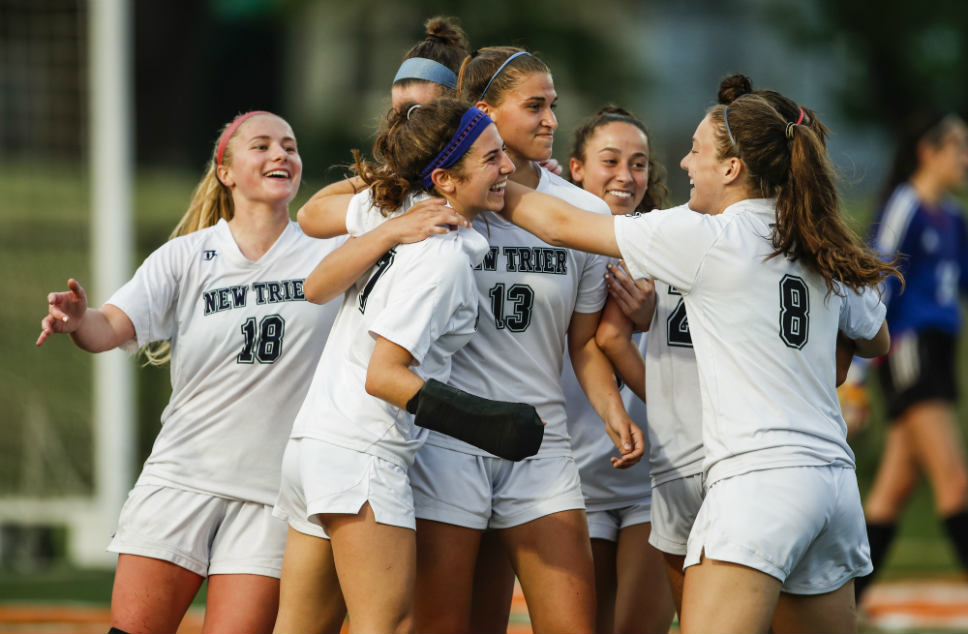 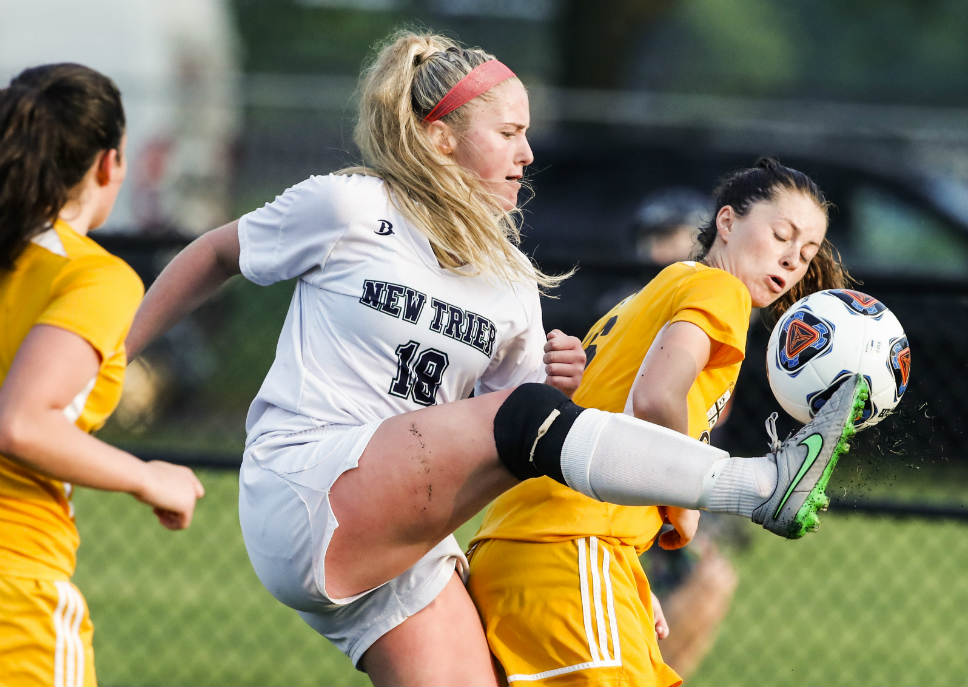 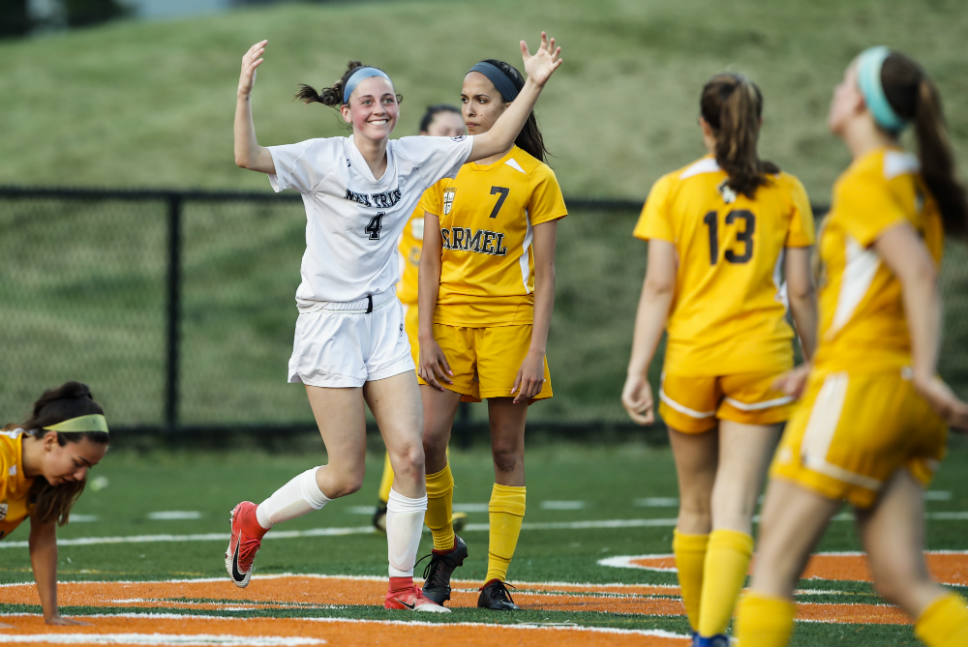 Victoria Flannagan of the Trevians reacts after scoring a goal in the second half. PHOTOGRAPHY BY JOEL LERNER 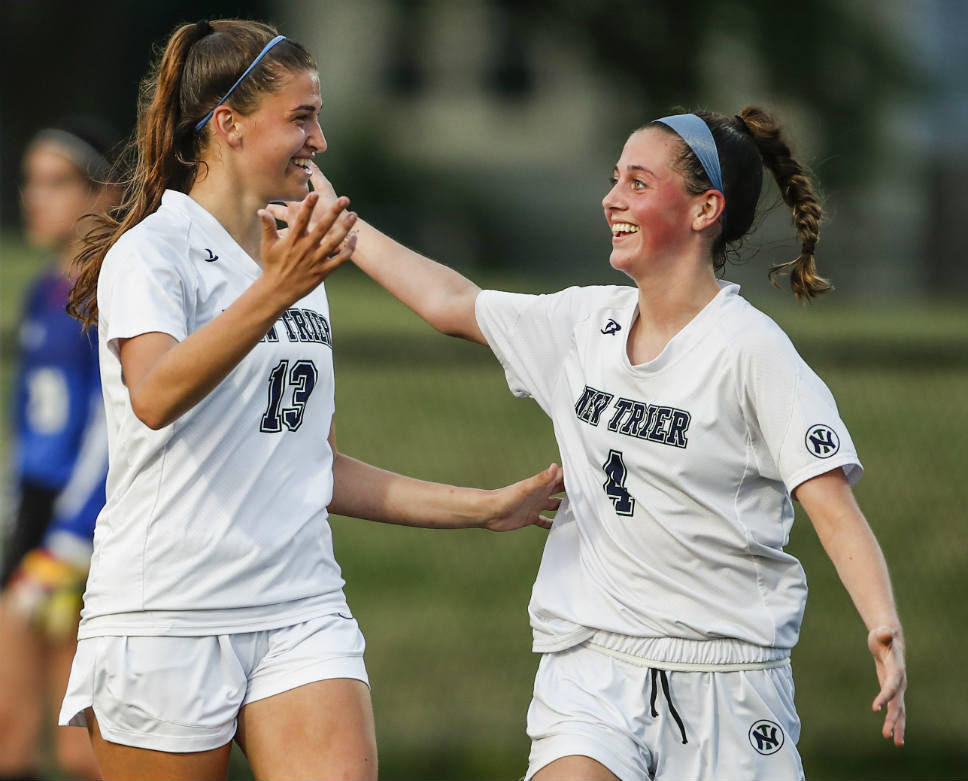 Nicole Kaspi (left) and Victoria Flannagan are all smiles after NT goes ahead 5-0. PHOTOGRAPHY BY JOEL LERNER 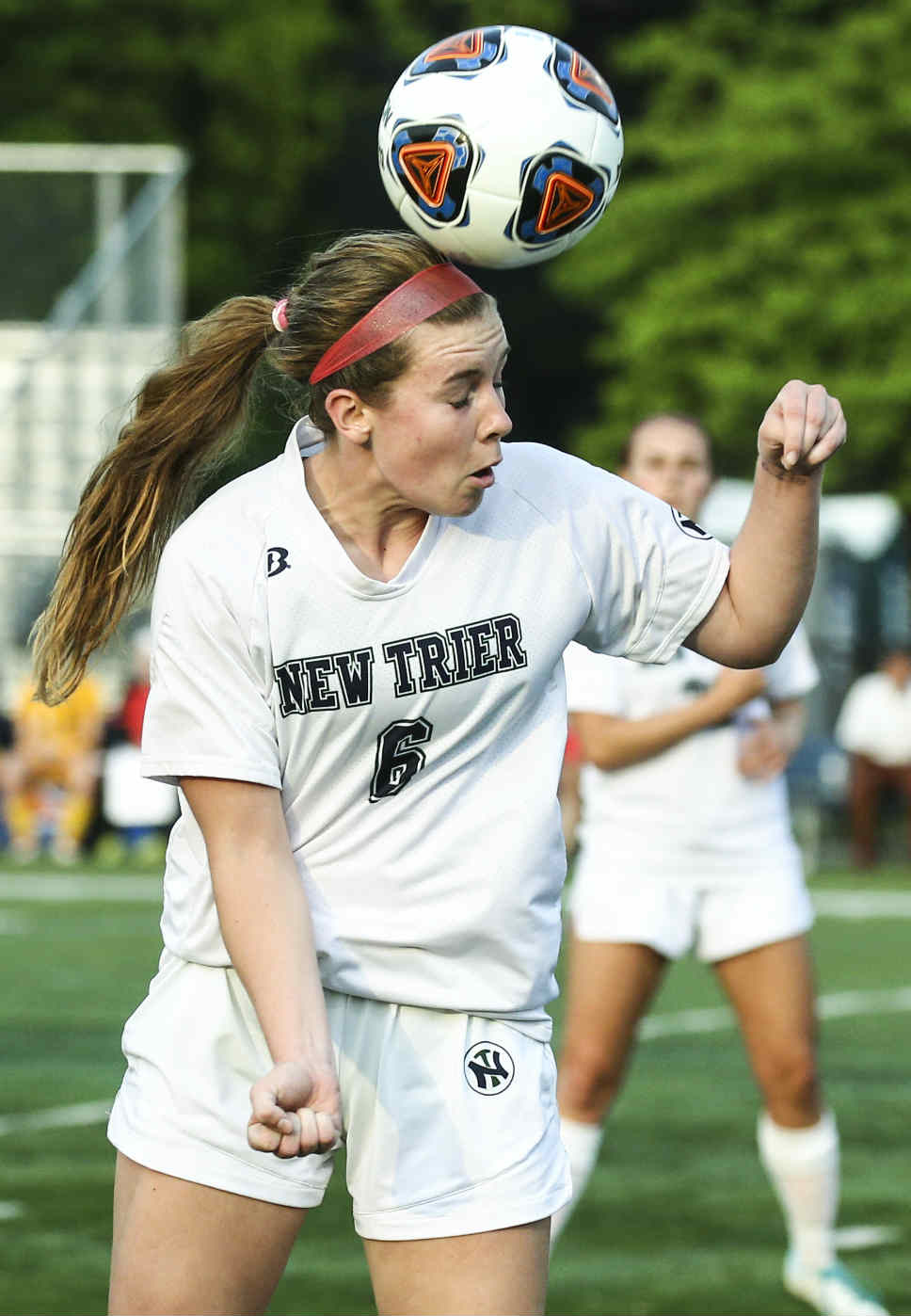 Lily Conley of the Trevians comes up with a header. PHOTOGRAPHY BY JOEL LERNER 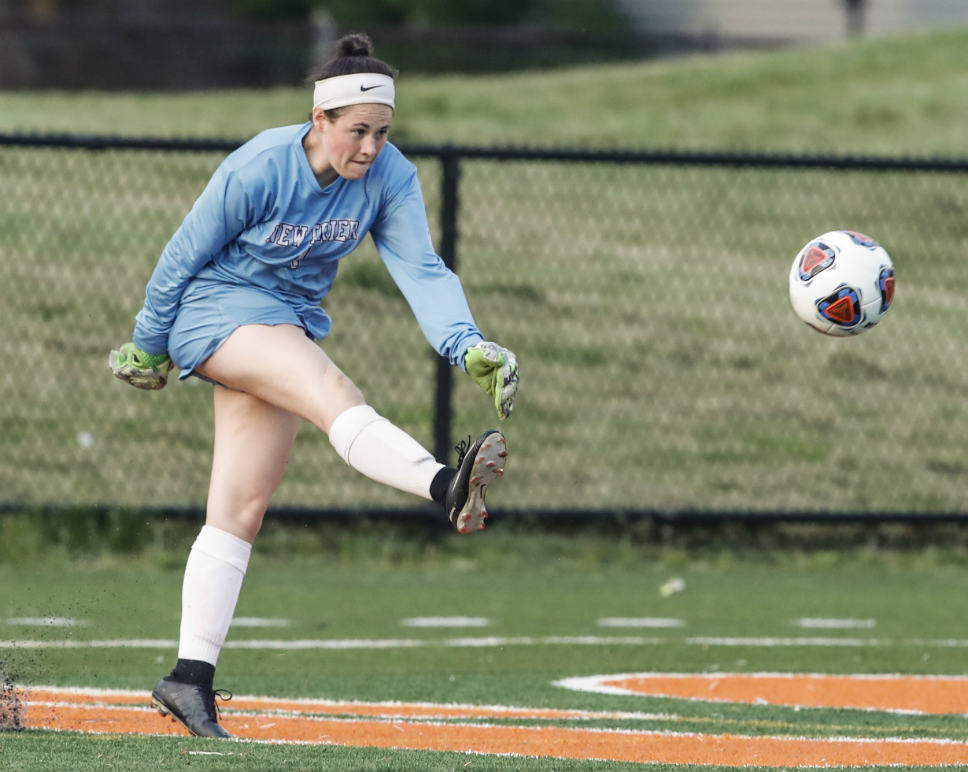 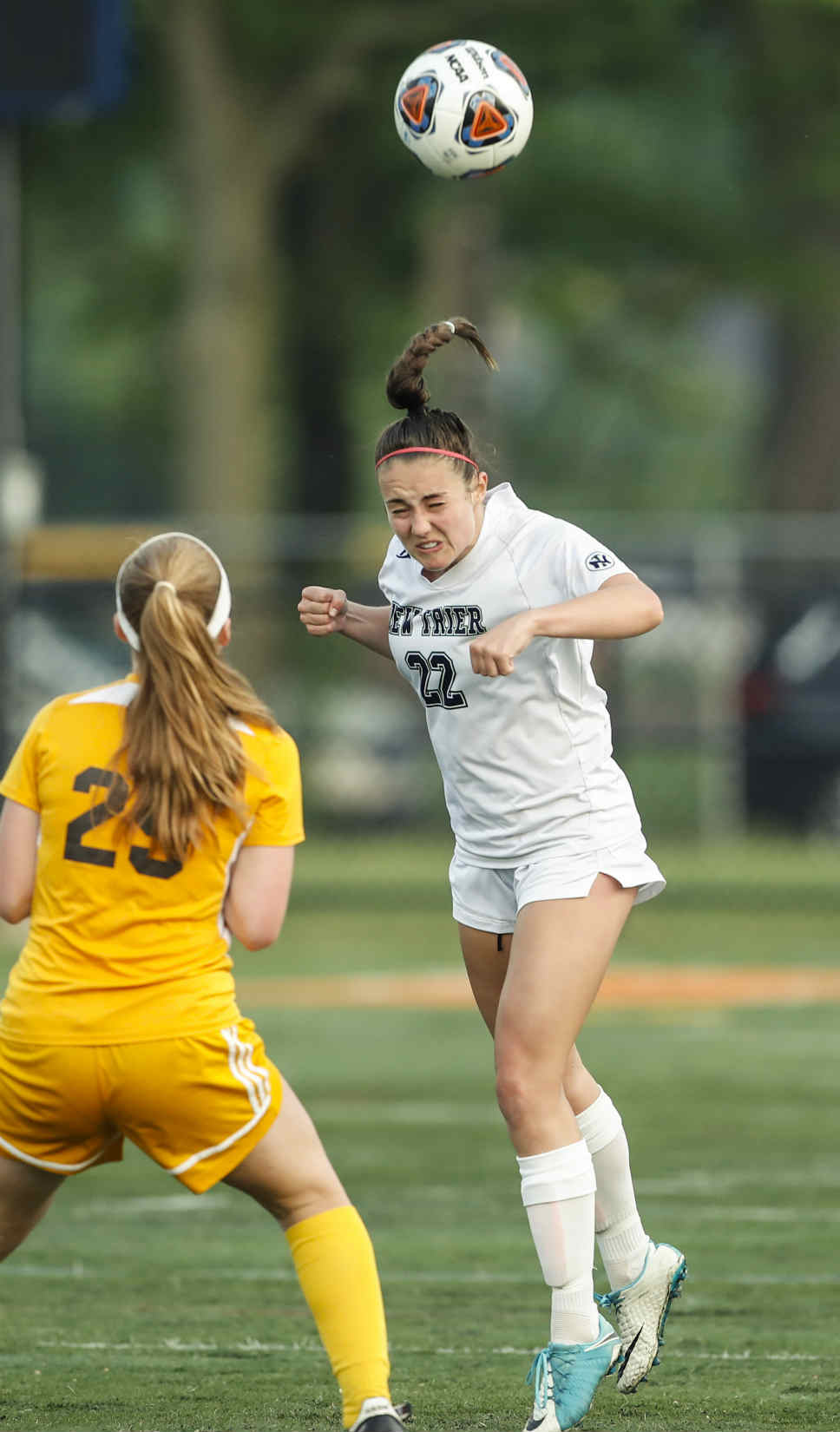 Whitney Hoban of the Trevans heads the ball in front of Carmel’s Lucy Tarcha. PHOTOGRAPHY BY JOEL LERNER