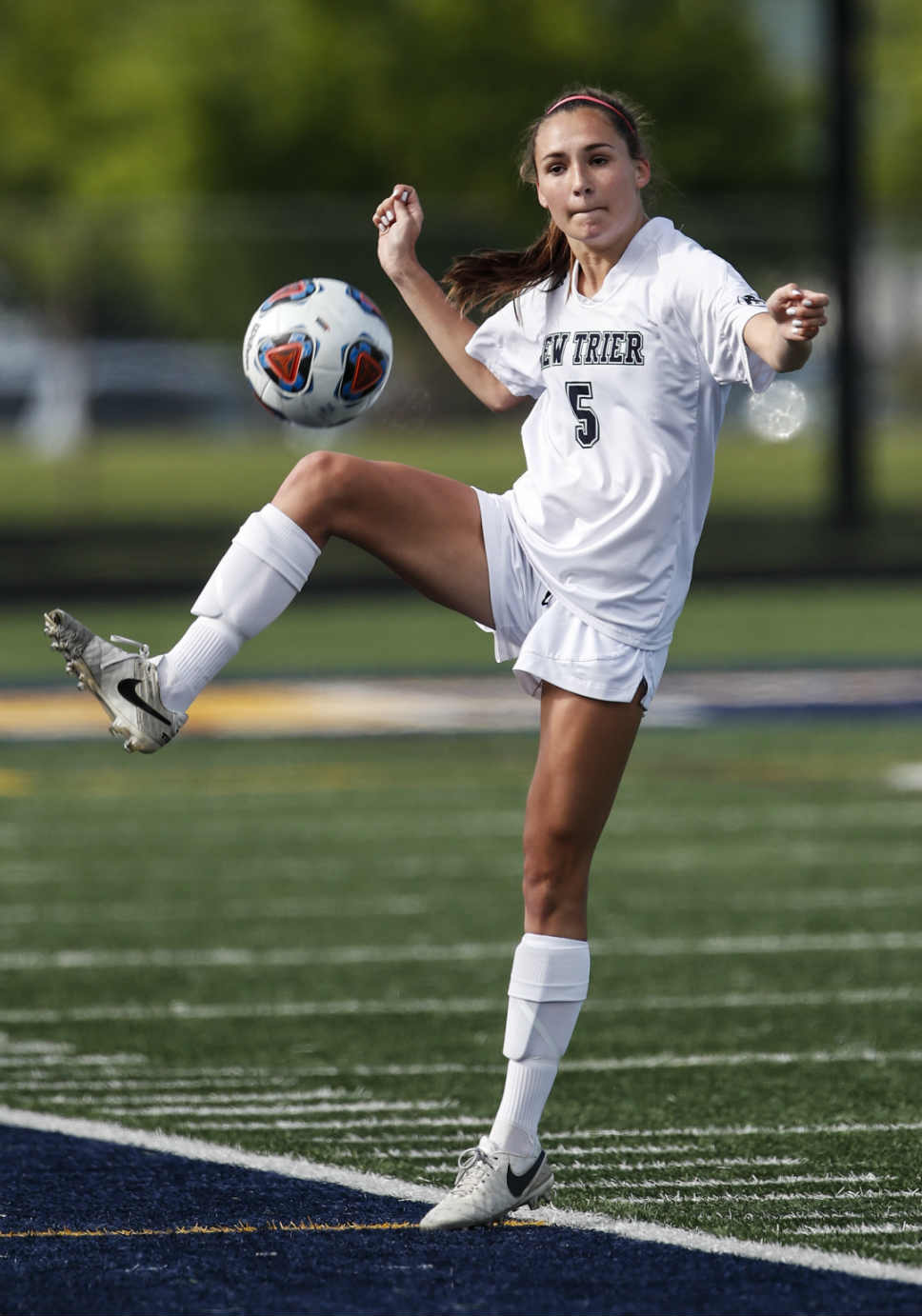 New Trier’s Caroline Iserloth takes possession of the ball during the sectional tournament at Glenbrook South. PHOTOGRAPHY BY JOEL LERNER

A soccer ball soars above and behind New Trier senior right back Caroline Iserloth in a match. She had misjudged the ball’s flight, a rare mistake for the 5-foot-7 backline staple. She hustles back, recovers.

Then she shoots a resolute look at Trevians coach Jim Burnside.

“Next time!” Iserloth shouts. “I’ll get it next time!”

Burnside recounted the telling regular-season sequence after his Trevians had edged Loyola Academy’s Ramblers 2-1 in the Class 3A Glenbrook South Sectional final May 25.

“I think so highly of Caroline,” the coach said of the fourth-year varsity member and third-year starter. “Determined, such a determined player. She plays with a great attitude, with an edge, and she reads the game well, makes great decisions. I love Caroline’s knowledge of the game.

Iserloth plays ‘D’ with forward-like skills. The huge fan of Grey’s Anatomy has a game that’s … surgical. Her passes in transition are right-on, and her headers are precise, always landing near the feet of her targets.

The thought of popping to head a 50-50 ball made Iserloth cringe years ago.

“It’s never been my favorite thing to do in soccer,” admits Iserloth, who will likely play club soccer at the University of Wisconsin. “But I knew I had to at least become comfortable with it.”

NT, behind in a match? That’s rare — teen-without-a-cellphone rare.

Hardly. NT senior midfielder/forward Nicole Kaspi answered with the first of her two goals a little more than 90 seconds later. Trevians senior forward Nicole Basil had initiated the attack with a steal near midfield.

“We bounced back because our energy never dropped after that goal,” Iserloth said. “We’re always talking about the five minutes at the start of each half and the five minutes after a goal. Those are big minutes, important minutes.”

“They’ve been such good leaders for us,” Nassar said of Parker and Iserloth. “Caroline is incredible, the way she traps the ball, moves the ball up the middle. Teams don’t expect a defender to attack the way Caroline does. She’s fast and quick and smart, with great skills.”

The sister of former New Trier varsity golfer Nicholas Iserloth (Vanderbilt University) and Matt “Barr” Iserloth (Carleton College) liked the idea, as an eighth-grader, of someday playing Division I soccer. She entered high school and helped NT capture a third straight 3A state championship in 2016, scoring a goal in NT’s 4-0 defeat of Collinsville in the state title match. Her priorities changed as she took harder classes, though her love for soccer did not, especially whenever she played alongside her formidable backline mates in NT contests.

“I love my teammates on defense,” said Iserloth, interested in majoring in business at Wisconsin. “Their energy is always high. If there’s yelling, if there’s some confusion about covering a player, we always end up getting together and communicating, making sure we correct whatever has to be corrected.

“In the end, we have each other’s back.”

One of Iserloth’s biggest supporters is her mother, Melissa, an avid tennis player.

“She’s at every game,” the daughter said. “She motivates me.”

Iserloth has also drawn inspiration from her favorite TV character, Dr. Meredith Grey on Grey’s Anatomy. Grey, in a way or two, is Iserloth in scrubs.

“Meredith Grey,” Iserloth said, “is driven, knows what she wants, owns it. She has high expectations for herself. Everybody loves her and respects her.”

Notable: New Trier senior back Meredith Nassar played with a broken bone in her right hand in NT’s 2-1 defeat of Loyola Academy in the Class 3A Glenbrook South Sectional final May 25. She had sustained the injury while inadvertently colliding with an Evanston Wildkit in a sectional semifinal May 22. Nassar, a righty, praised NT trainer Jordan Anderson for providing her with a protective cast that covered most of her right hand and forearm.

“Maybe I’ll become ambidextrous because of this injury,” Nassar cracked.

Nassar will either play club soccer or try to make it as a women’s soccer team walk-on at Miami University in Oxford, Ohio, while double majoring in finance and pre-med. Her parents, Brad and Elizabeth, attended Miami and met there as freshmen.